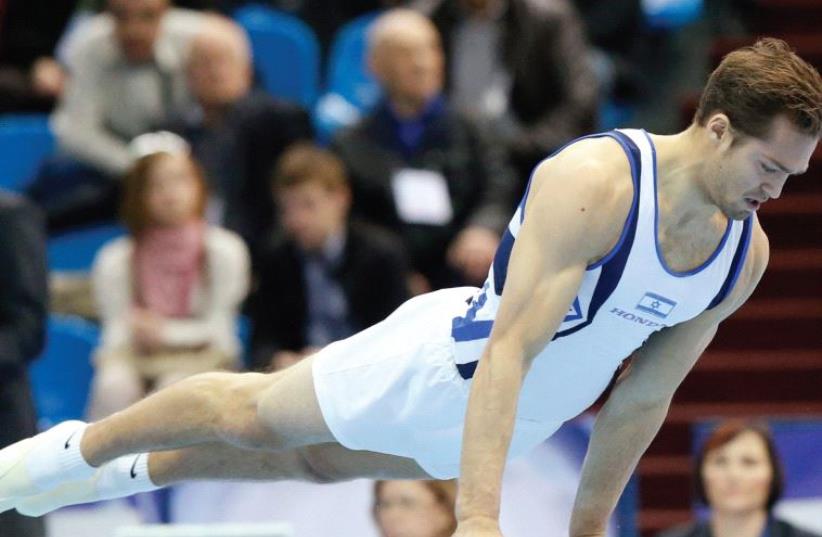 Alex Shatilov
(photo credit: Courtesy)
Advertisement
Alex Shatilov's dream of returning from the Rio Olympics with a medal ended after a mere 13 seconds on Saturday.The Israeli gymnast was hoping for an extended stay in Rio, but can already start packing his bags after failing to qualify for the finals in the floor and horizontal bars.The two-time medalist at the World Championships and six-time medalist at the European Championships finished the floor final in Beijing in eighth place before coming sixth in London. He was eyeing an improvement of at least three more places in Brazil and talked up his chances of claiming a first Olympic medal in Rio, saying that he will settle for nothing less. But he stumbled early in his performance in the qualifiers on Saturday, losing any chance of finishing among the top eight who progressed to next week's final.Shatilov finished with a score of 13.500 points, 6.000 for difficulty and 7.500 for execution. The 29-year-old was also nowhere near to qualifying for the final in the bars, registering a score of 14.066 points, 6.700 for difficulty and 7.366 for execution."Things didn't go as I planned, but that happens in sport and there's nothing I can do about it," said a dejected Shatilov. "You need to know how to cope with disappointments and life continues. I trained hard and wanted to have a good competition, but you can't turn the clock back. I started my floor drill well, but a small mistake cost me and I knew I had no chance after that. I never imagined a scenario like this." Shatilov didn't rule out retirement, but went on to say that he thinks that "both physically and mentally I can continue because I saw what I'm capable of in my recent competitions and I still have a passion for the sport." The disappointment for the Israeli delegation didn't end in the gymnastics arena. Judoka Shira Rishony, who was the first Israeli to compete in the Games, was already knocked out in the first round of the women's under-48 kilogram competition. Rishony was disqualified for an illegal use of her elbow, handing Ukrainian Maryna Cherniak the win."I'm still in shock," said a tearful Rishony, whose Olympics lasted just over two minutes. "I felt I was ready and it hurts me that I couldn't give my all and that it all ended before it really began. It is hard to put in words how much you give and how much you sacrifice and how much you dream of this moment. You certainly don't imagine it ending like this." There wasn't any good news for the Israeli representatives in the pool either. Gal Nevo, who was the first Israeli to take part in the swimming events, registered a disappointing time of 4:18.29 minutes in the 400-meter individual medley, almost seven seconds slower than his personal best. Nevo finished in 19th place out of 27, almost five seconds slower than the time required to reach the final.Amit Ivry ended the women's 100m butterfly heats in 27th place in a time of 59.42s. Israel's women's 4X100m freestyle relay team (Keren Siebner, Zohar Shikler, Amit Ivry, Andrea Murez) finished 16th out of 16 teams in 3:41.97m."As soon as the delegation gets off to bad start that creates a bad atmosphere, but I believe that will change," said Nevo. "There is still plenty of time and many more Israelis who have to compete."