Dorozhon’s Olympic dream ended in tears last summer after she just missed out on a place in the Rio Games. 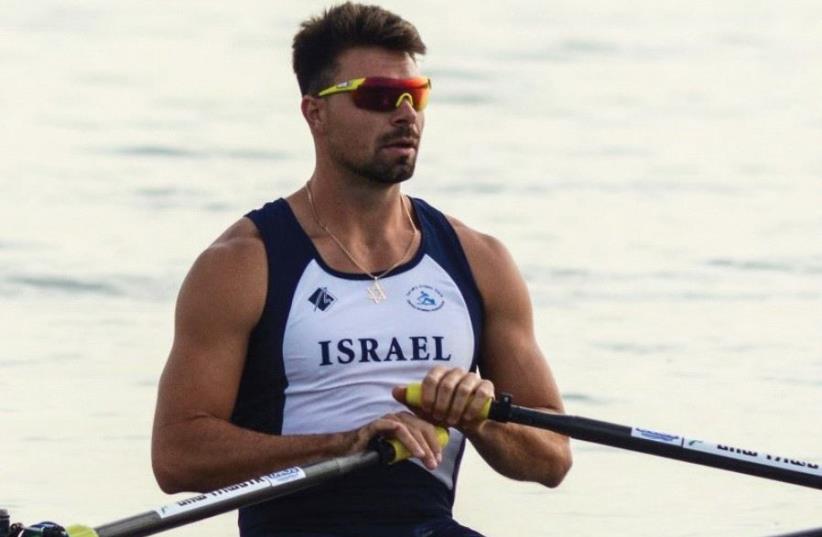 Israeli rower Dani Fridman won his second gold medal of the 20th Maccabiah yesterday, finishing first in the singles sculls in the Kinneret.
(photo credit: ALON OZ/DANIEL ROWING CENTRE)
Advertisement
Israeli javelin thrower Marharyta Dorozhon won the Maccabiah women’s competition at Givat Ram in Jerusalem on Thursday, but more importantly, also did so with a throw of 63.07 meters to book her place at the World Championships in London next month.Dorozhon’s Olympic dream ended in tears last summer after she just missed out on a place in the Rio Games.The 29-year-old Dorozhon, who has a personal best of 64.56 meters, set the IAAF Qualifying Standard for Rio in 2015, but according to the regulations laid out by the Olympic Committee of Israel, she was required to register a throw of over 60 meters in 2016 in order to secure her place. The Ukrainian-born Dorozhon, who became an Israeli citizen in 2014, struggled with a groin injury for much of the year, and came nowhere near the distance she needed to clear.Dorozhon’s throw is the 17th-best in the world this year and will give her plenty of confidence ahead of the World Championships.Elsewhere, Linoy Ashram dominated the Maccabiah’s rhythmic gymnastics competitions.Ashram, who won two medals at the European Championships two months ago, swept all five gold medals, finishing first in the all-around, ball, ribbon, hoop and clubs finals, which also served as this year’s national championships.Canada and the USA will meet in the ice hockey final at the Pais Arena in Jerusalem on Saturday night. Canada defeated Russia 5-3. Israel faces Russia for the bronze medal on Friday.It is the first year that Jerusalem is hosting the ice hockey event.In the men’s beach volleyball final in Haifa, Canada took the gold after Israel failed to show up due to an injury to one of its players. Brazil won the women’s gold with a 2-0 win over Israel.Israel and Brazil will battle for gold in the men’s indoor volleyball final on Friday, while Israel and Ukraine will play in the women’s final.Israel and Brazil will also meet in the men’s handball final.Israel’s top rower Dani Fridman took his second gold medal of the Maccabiah, winning the single sculls competition in the Kinneret.Kayla Steinberg contributed.