Maccabi trailed by 14 points (68-54) with seven minutes to play, but ended the night with a 19-2 run, with Haifa capitulating under the pressure. 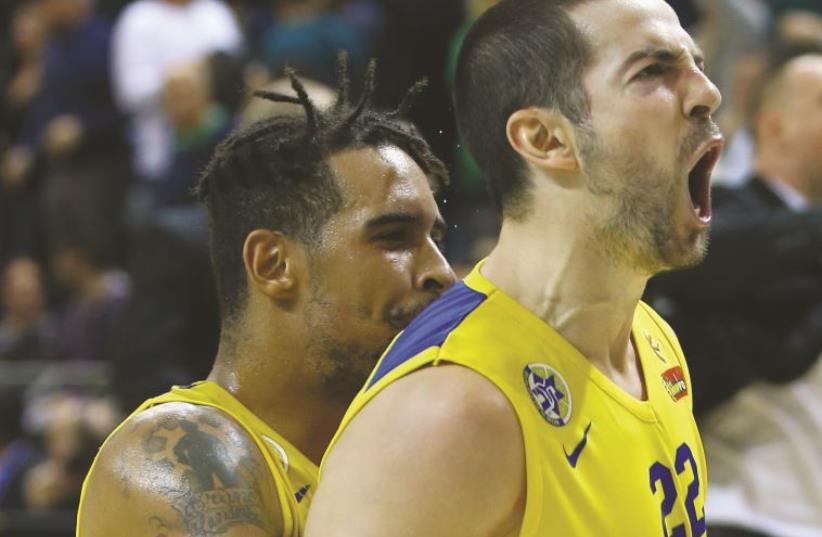 Maccabi Tel Aviv’s Taylor Rochestie and Sylven Landesberg
(photo credit: UDI ZITIAT)
Advertisement
A Taylor Rochestie three-pointer with 0.4 seconds to play capped a memorable comeback for Maccabi Tel Aviv on Saturday night, securing its place in the State Cup semifinals with a 73-70 win over Maccabi Haifa at Romema Arena.Maccabi trailed by 14 points (68-54) with seven minutes to play, but ended the night with a 19-2 run, with Haifa capitulating under the pressure.With its Euroleague campaign already over and Hapoel Jerusalem leading the BSL standings, Maccabi is desperate for success in the cup, especially with Haifa knocking out Jerusalem in the previous round.The yellow-and-blue seemed to be heading to a defeat when Will Graves hit a triple with just over seven minutes remaining to establish a comfortable 68-54 margin. However, that proved to be the final field-goal Haifa would score in the game, with Tel Aviv eating away at the gap until Rochestie secured the win with a stunning step-back three.Rochestie finished the night with just seven points, with Devin Smith leading Maccabi with 18 points and 11 rebounds. Trevor Mbakwe added 12 points and 14 boards for Tel Aviv, which committed 21 turnovers.“It was an incredible comeback win for this team,” said Rochestie. “We showed a lot of character, we stayed in it, we believed in each other and recorded an amazing win. We knew this was going to be a tough game and tough games come down to big shots. But it wasn’t just my big shot, but the big shots all the team made. We kept believing and came out with a huge win. Every game is pushing us forward. We just want to keep this moment going.”Rene Rougeau finished with 16 points and seven rebounds for the heartbroken Haifa.Saturday’s first quarterfinal was also decided in the final second, with Maccabi Rishon Lezion edging Bnei Herzliya 78-77 thanks to Mark Lyons’s buzzer-beater.Rishon looked to be cruising at the break, leading by 15 points (48-33). However, a 19-0 Herzliya run to start the second half gave the hosts the lead (52-48) and a dramatic finish would ensue. A call for goaltending gave Herzliya the advantage with 4.5 seconds left on the clock, but Lyons released his shot in the brink of time and it dropped in after rolling on the rim.Darryl Monroe led Rishon with 23 points, while Shawn Dawson had 16 points and nine boards and Chris Wright added 14 points and 10 rebounds.Drew Crawford finished with 24 points and nine rebounds for Herzliya.The last two semifinalists will be decided on Sunday.Maccabi Ashdod hosts Maccabi Kiryat Gat, while Ironi Ness Ziona visits the final National League team in the competition, Hapoel Ramat Gan/ Givataim.