The superstar has left a legacy in Israel, with two coexistence projects operating in Jaffa and Acre as part of the Cruyff Foundation. 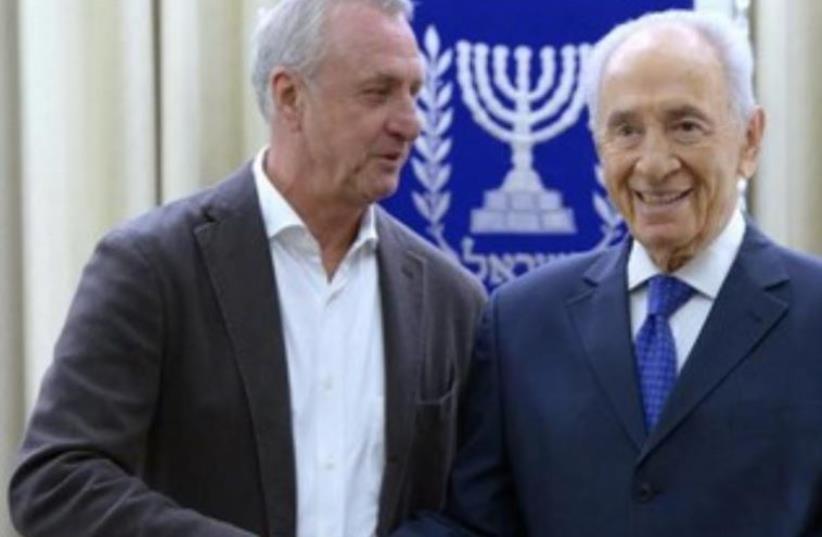 President Shimon Peres welcoming Johan Cruyff to the President's Residence
(photo credit: Mark Neiman/GPO)
Advertisement
Johan Cruyff, the legendary Dutch soccer striker and coach, has died of lung cancer at the age of 68. Cruyff passed away in Barcelona, surrounded by family, according to his website.His son, Jordi, has been Maccabi Tel Aviv's sporting director since 2012, with the club enjoying repeated success under his guidance. Both father and son met with the then Israeli President Shimon Peres, when Johan came to Israel in 2014 to open a "Cruyff Court" in Acre. The Cruyff Foundation, which works in close cooperation with the Peres Center for Peace, brings sports fields to inner city areas, fosters wheelchair sports, girls’ football teams and co-existence. The foundation opened its first Israeli "Court" in Jaffa six years ago.As a player, Cruyff was the embodiment of Dutch "total football," a fluid style of play focused on ball possession and rapid passing, and involving all members of the team in both attack and defense.He emerged as one of the world's greats in the early 1970s when he helped Ajax win three European Cups in a row from 1971-73, and he was named European Footballer of the Year in 1971, 1973 and 1974.He joined Barcelona for a then-world record transfer fee of $2 million, and it was the Catalan club that later defined his coaching career as he led them to their first La Liga title in nearly 15 years in 1974.He was also a key player on the great Netherlands team that reached the 1974 World Cup final, when a global audience saw him perform the now-famous "Cruyff turn," in which the player tries to deceive a defender by hooking the ball behind their own leg before swerving away in the direction of the ball.Cruyff had been a heavy smoker, and had heart surgery in 1991. His death comes less than six months after he announced that he had been diagnosed with lung cancer.