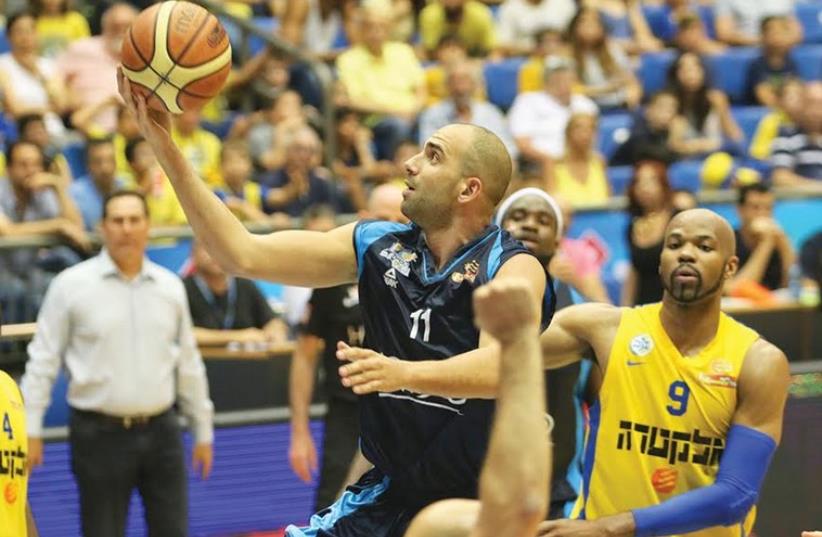 Hapoel Eilat forward Elishay Kadir
(photo credit: ADI AVISHAI)
Advertisement
In what seemed like an impossible scenario just last week, Maccabi Tel Aviv and Hapoel Eilat will meet on Wednesday night in a decisive Game 5 for a place in the BSL final.Eilat’s 92-79 home win over Maccabi on Sunday night tied the best-of-five series at 2-2 and set up a one-game winner-takesall clash for a place in the final against Hapoel Jerusalem.Maccabi crushed Eilat 86-64 on the road last Sunday to open what seemed like an unassailable 2-0 lead. However, after claiming a stunning 104-98 overtime victory in Game 3 in Tel Aviv last Wednesday and triumphing on Sunday, Eilat finds itself within one win of becoming just the second team in Israeli basketball history to erase a 0-2 deficit in the playoffs.Maccabi Rishon Lezion was the first and only team to do so to date in 2012.Eilat took an early lead on Sunday and was ahead by as many as 19 points in the third quarter before Maccabi got back into the game with a 12-0 run, cutting the deficit to six points.However, Eilat regained its composure before it was too late and will enter Wednesday’s clash brimming with confidence of completing the upset.“Every credit to the players for what they have done in the past week, physically and mentally,” said Eilat coach Arik Shivek. “To come back from 0-2 against Maccabi isn’t simple. We won and also played really well. We can celebrate until tomorrow morning but then have to begin preparing for Game 5. They are hosting Game 5 but with the heart we showed tonight anything is possible.”Afik Nissim led six Eilat players in double figures with 18 points, with the hosts hitting 13-of-25 three-point attempts. Adrian Uter added 16 points and 11 rebounds, while Elishay Kadir had 12 points and 11 boards and Khalif Wyatt finished with 11 points and 11 assists.Jake Cohen had 16 points for Maccabi, which is in danger of missing the final for the first time since 1993.Maccabi scored the first basket of the night, but Amit Simhon’s three-pointer at the other end gave Eilat the lead, one it wouldn’t relinquish until the final buzzer.The hosts were ahead by a slender gap for much of the first quarter, with Nate Linhart’s triple cutting Maccabi’s deficit to three points (25-22) after 10 minutes.An 11-0 run midway through the second period, capped by two Kevin Palmer treys, took Eilat’s margin to double digits (44-31), but Maccabi limited the damage and trailed by only six points (47- 41) at the break.However, momentum remained on Eilat’s side, with its superb night from beyond the arc helping it surge ahead once more.Simhon hit two straight triples to take the lead to 62-48 and seven points from Afik Nissim followed by another Palmer triple ensured Eilat was still ahead by 14 points (74-60) with 10 minutes to play.Another Palmer three took the margin to a record 19 points (79- 60) and Maccabi looked dead and buried.Five straight points by Jeremy Pargo capped a 12-0 run which brought Tel Aviv within six points (81-75) with more than four minutes to play. But Maccabi came no closer, with Nissim clinching the win with five consecutive points, reestablishing a double-digit lead (90-77) from which there was no return.