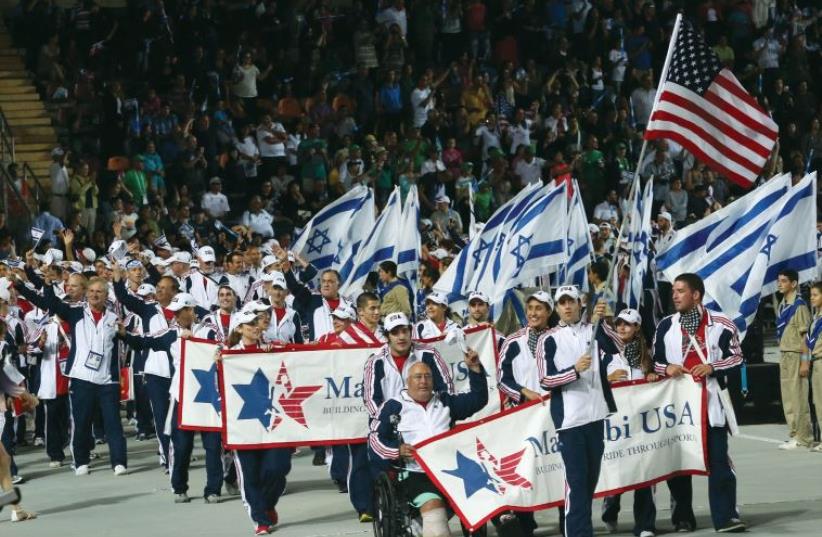 Opening of the Maccabiah Games at Teddy Stadium in Jerusalem In 2013.
(photo credit: MARC ISRAEL SELLEM/THE JERUSALEM POST)
Advertisement
The newest members of the International Jewish Sports Hall of Fame will be inducted at the Wingate Institute on July 4, including American swimmer Anthony Ervin, Israeli windsurfer Lee Korzits and volleyball coach Arie Selinger.All three will be present, including Ervin, who will be in Israel for the 20th Maccabiah Games, which will get underway two days later.The International Jewish Sports Hall of Fame/Yad Le’ish Hasport Hayehudi was formally inaugurated on July 7, 1981.Seven people in all were elected for the IJSHOF in 2017, hailing from America, Canada, Hungary, Israel, New Zealand and Russia.The three Americans are Ervin, Thelma “Tybie” Thall-Sommers and Albert Von Tilzer.Ervin, a native Californian now living in Florida, captured a pair of gold medals at the 2016 Summer Olympics in Rio in two swimming events: the 50-meter freestyle and the 4×100- meter relay. The victories were a near repeat of his gold and silver medals in the same events at the 2000 Games in Sydney, Australia.Between the 2000 and 2016 Olympic Games, Ervin won three golds and one silver Olympic medals, and four World Championship gold medals. Ervin sat out competition for nearly nine years, until 2012, but returned to the top of the Olympic podium at the age of 35.Thall-Sommers garnered two-time world championships in table tennis. One was the world mixed doubles title in 1948, and the other as a member of the US team that won the trophy in 1949.Arguably, the American with the longest impact on spectator sports was the late Von Tilzer, who wrote the immortal baseball anthem “Take Me Out To The Ballgame” in 1908.Also elected were: The late National Hockey League star Hyman (Hy) Buller of Canada, who played for the New York Rangers. He set a rookie record in 1951-1952 for scoring most goals, and ranked second for most goals among all NHL defensemen in three consecutive seasons.Joszef Braun joined the MTK Budapest soccer club in 1916 at age 15 and three years later was named Hungary’s “Player of the Year.” His team won nine national championships through 1924.Braun died in a Nazi forced labor camp in 1943.New Zealand sailing champion Joanna (Jo) Aleh became a “double-double” gold medalist (with Olivia Powrie) in the women’s 420 Class event at the 2012 and 2016 Olympics, and at the 2007 and 2013 world championships.Swimmer Semyon Belits-Geiman, a Moscow native, broke 67 Soviet national freestyle records, set a world 800-meter freestyle record in 1966, and the same year won two gold medals at the European championships.Born in Poland in 1937, Selinger and his family were separated by the Nazis in 1942 and he was sent with his mother to a concentration camp. After surviving the camp, Arie arrived in Israel in the American Red Cross’ first boatload of immigrants and soon discovered his passion for sports, especially volleyball.He played for the national volleyball team between 1954 and 1963, participating in the 1956 World Championships in Paris. After graduating from the Wingate Institute, he became a physical education teacher, and simultaneously coached the Israeli women’s team, guiding it to eighth place at the 1967 European Championships in Turkey. He left Israel in 1969 to study at the University of Illinois and joined the US women’s team’s coaching staff in 1975.Selinger guided the team to a silver medal in the 1984 Los Angeles Olympics, the first medal won by an American team in Olympic volleyball competition. Arie was a volleyball innovator and quickly got worldwide recognition, with his 1987 book “Power Volleyball.” Perhaps the brightest moment of his coaching career came in the 1992 Barcelona Games. Selinger led the Dutch men’s national team to a silver medal, four years after he guided it to fifth place in the Seoul Games. He was inducted into the volleyball Hall of Fame in 1995. In June 2007, he finally turned his attention back to Israeli volleyball, rebuilding the national women’s team.In 2003, Korzits became the youngest winner of a gold medal at the windsurfing World Championships at the age of 19. After a couple of near-death experiences in the sea, Korzits reigned supreme yet again when she won the gold medal at the world championships in 2011 before defending her title in 2012 and 2013. She missed out on a medal at the Olympics on the last day of London 2012, ultimately finished in sixth place.