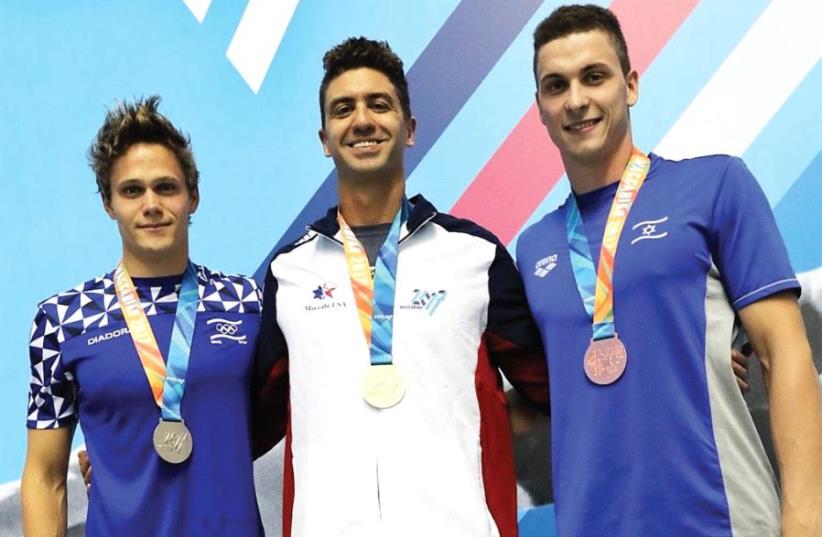 American swimmer Anthony Ervin (center) poses on the podium with fellow medalists, Israelis David Gamburg (left) and Alexi Konovalov, after winning his first gold medal of the 20th Maccabiah last night, finishing first in the 100-meter freestyle final at the Wingate Institute
(photo credit: ITAMAR GREENBERG)
Advertisement
The athletics finals took center stage at the 20th Maccabiah on Wednesday, with the fastest man in Israel, Imri Presiado, setting a new personal best in the 100 meters on the way to the gold medal in Givat Ram in Jerusalem.The reigning national champion broke his personal best and set the fifth fastest time ever by an Israeli when he clocked 10.38 seconds in the semifinals. He proved it was no accident when he won the final in 10.39s.The swimming events came to a close at the Wingate Institute earlier Wednesday, with American Olympic champion Anthony Ervin collecting two more gold medals to take his personal tally in the Games to three.He claimed his first gold medal of the 20th Maccabiah in the first day of competition on Sunday, winning the 100-meter freestyle final. Ervin set a new Maccabiah record in the 50m free, in which he is the reigning Olympic champion from Rio 2016, on Wednesday, clocking a time of 22.05 seconds to finish ahead of Israel’s David Gamburg.He helped himself to another gold and record in the 4×100m medley relay, with the Americans finishing in 3:41.82m.Ervin, a native Californian now living in Florida, is the biggest name competing at this year’s Maccabiah. He captured a pair of gold medals at the 2016 Summer Olympics in Rio in two swimming events: the 50-meter freestyle and the 4×100-meter relay. The victories were a near repeat of his gold and silver medals in the same events at the 2000 Games in Sydney, Australia.Ervin, who has also won two golds and one silver World Championship medals, sat out competition for nearly nine years, until 2012, but returned to the top of the Olympic podium at the age of 35, making him the oldest individual Olympic gold medal winner in swimming.American Kelly Fertel was the female swimmer of the meet, picking up two more gold medals on Wednesday. She set a new Maccabiah record of 2:15.03m in the 200m individual medley before also taking the gold in the 800m free in 8:57.21m.An Israel national record was also set in the pool on Wednesday, but it proved to be only good enough for a silver medal. Shahar Menahem, Amit Ivry, Keren Siebner, and Or Tamir clocked 4:11.67m in the women’s 4×100-meter medley relay final, but it was the Americans who finished first in a new Games record of 4:10.77m.Judd Howard broke the Maccabiah record in the men’s 200m IM, registering 2:02.83m.In all, there were 15 new Maccabiah records set during the swimming competitions.Meanwhile, in the rowing events held at the Kinneret, Team Israel picked up a gold medal in the coxless four final on Wednesday.Dani Fridman, who just three days earlier had finished in ninth place in the singles sculls competition at the World Cup event in Lucerne, Switzerland, led Israel to first place. He was joined in the boat by Omri Shnetzer, Alon Gibor and Andreas Musa. The USA and Argentina claimed the silver and bronze medals, respectively.“We got off to a quick start and took control early on,” said Fridman, whose focus this year is the World Championships in September. “We proved we have a strong team and that rowing has great potential in Israel. I will compete in the singles sculls on Thursday and I’m targeting first place once more.”The semifinals in the soccer competition were set on Wednesday. Israel beat Argentina on penalties to advance to face the USA , which defeated Uruguay 4-2. In the other semifinal, Mexico, which beat France in a shootout, will play England, after it defeated Brazil 2-1.The final of the handball competition will see Israel face Brazil.Israel thrashed France 41-19 in the semis, while Brazil beat Argentina 29-25.