Everything seemed to fall into place in the promising 76-73 victory over Russia in Saturday’s opener, and Israel recorded yet another impressive win against Finland. 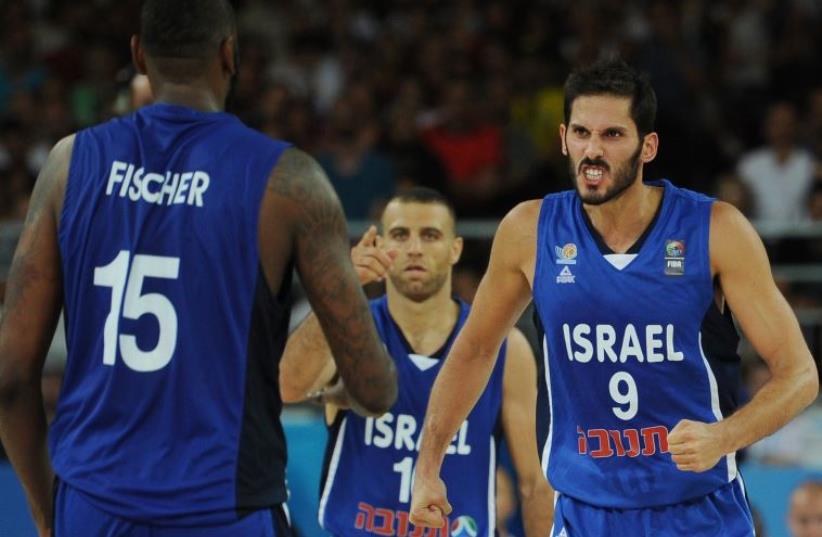 Israel's Omri Casspi (R) reacts during the group A qualification basketball match between Finland and Israel at the Euro Basket 2015 in Montpellier on September 6 2015.
(photo credit: AFP PHOTO / SYLVAIN THOMAS)
Advertisement
Israel can already secure its progress to the knockout rounds of EuroBasket 2015 on Monday, after continuing its sensational start to the championships by beating Finland 79-66 in Montpellier, France on Sunday to improve to 2-0 in Group A.There was nothing in Israel’s preparations for the tournament to indicate that it was even capable of fighting for a place in the Round of 16. A single win from eight warmup games and numerous injuries meant the blue-and-white entered the European Championships with little expectations.However, everything seemed to fall into place in the promising 76-73 victory over Russia in Saturday’s opener, and Israel recorded yet another impressive win against Finland.The blue-and-white led from start to finish, holding an 18-point gap in the second quarter. Finland closed to within four points early in the fourth period, but Israel reestablished a double-digit margin at a crucial moment to clinch the win.Another victory against Bosnia- Herzegovina in Montpellier on Monday will officially secure Israel’s place in the last 16 with two games to spare, with the top four teams in the group to advance to the next stage.Even two wins may well be enough to finish in the top four, but Erez Edelstein’s men will want to already guarantee their progress on Monday, and then battle for seeding in the remaining group games against Poland on Wednesday and France on Thursday.“We are not getting ahead of ourselves and we will remain humble and hungry,” said a teary-eyed Edelstein.“I’m emotional because these are the European Championships and we are being congratulated by the Prime Minister and everyone in Israel. This is only the beginning of the road and I ask that no one begins to celebrate just yet. We lost to Bosnia 10 days ago and we need to prepare for that tough game.”Bosnia played group-favorite France on Sunday night after losing 68-64 to Poland in its opener.Israel was led on Sunday by Lior Eliyahu, who finished with 22 points, six assists and five rebounds after scoring 10 crucial fourth-quarter points in the win over Russia. Gal Mekel finished with 14 points and five assists, with Yogev Ohayon adding 13 points and five rebounds.Omri Casspi may have scored only 10 points, but he led the team with 36 minutes on the floor and was excellent on both ends, also contributing eight rebounds and four assists. Center D’or Fischer took just two shots, but ended the game with seven points, 11 boards and three blocks.Sasu Salin had 13 points for Finland.Israel picked up where it left off on Saturday, scoring 10 of the first 13 points to open an early lead.Finland looked like it was still recovering from its overtime loss to France the previous night and Eliyahu ended the first period with two straight baskets to take his tally to 10 points and open a 12-point margin (25-13).Dagan Yivzori’s three-pointer with 42 seconds to play in the second period opened a record 18-point margin (46-28) and Israel held a 15-point cushion after a sensational half.Finland ate away at the deficit in the third period, but the national team still took an eight-point gap (62-54) into the final 10 minutes.The momentum remained with Finland at the start of the fourth quarter, with Gerald Lee’s basket cutting the deficit to just four points (65-61). However, points from Casspi and Eliyahu settled Israel’s nerves and nothing was going to deny the blue-and-white the win after Mekel’s three-point play with 4:23 minutes remaining opened a 74-63 margin.“I’m not surprised by the wins. This is what I expected,” said Casspi.“We need to continue winning in the game against Bosnia and there is no reason we can’t end this group in second place.”