After impressive group phase, blue-and-white aims to reach last eight for the first time in 12 years. 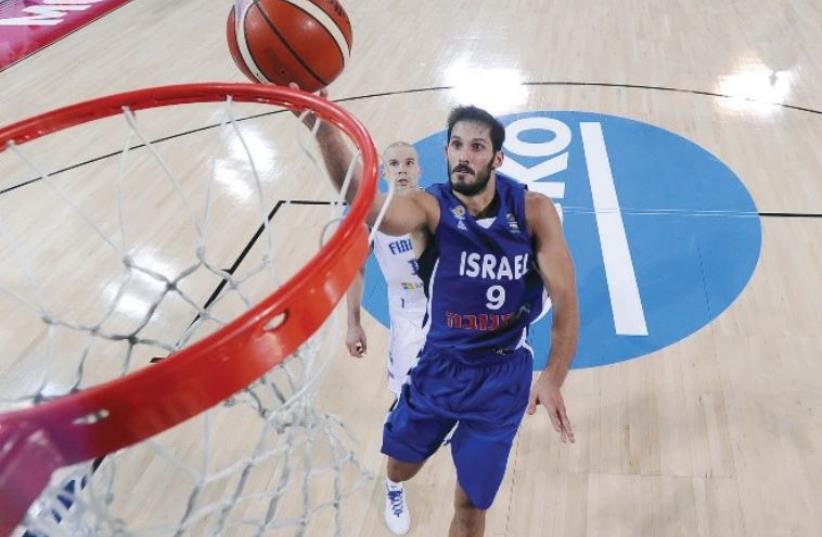 Israel forward Omri Casspi leaps for a layup
(photo credit: FIBA EUROPE WEBSITE)
Advertisement
After surprisingly advancing to the EuroBasket Round of 16, the Israel national team targets far more significant history when it faces Italy in Lille, France on Sunday night for a place in the quarterfinals.The blue-and-white progressed past the first round of the European Championships for the first time since 2007 in impressive fashion, securing its place in the last 16 with a game to spare before ending Group A in second position.Israel finished the group phase with a 3-2 record following Thursday’s 86-61 defeat to France, with Omri Casspi, Gal Mekel and Lior Eliyahu all being rested.Israel’s big three will be fit to play on Sunday as the national team aims to reach the last eight at the European Championships for the first time since 2003, and just the second in 32 years.Merely reaching the second round has become a rare achievement for Israel, but qualifying for the last eight will propel the team to unforgettable status, alongside the great Israel sides of the past.The blue-and-white enters Sunday’s showdown as the underdog, but the belief currently running through the side means the roster does not only think it can progress to the quarters, but is almost expecting to do so.A single win in eight warm-up games meant the expectations were extremely low ahead of the championships, but wins over Russia and Finland to start the tournament changed everything, and even the dejecting defeat to Bosnia-Herzegovina couldn’t derail the blue-andwhite, which qualified for the knockout rounds with a game to spare after beating Poland before losing to France in its final group game.Italy finished Group B in third place with a 3-2 record, claiming impressive wins over Spain and Germany, after first beating Iceland, while suffering defeats to Turkey and Serbia.The Italians are led by the NBA trio of Danilo Gallinari, Andrea Bargnani and Marco Belinelli, with up-and-coming Alessandro Gentile also having an excellent championships.Gallinari has been superb, averaging 21.0 points and 7.4 rebounds per game, while Belinelli has averaged 17.5 points, including almost four three-pointers, as well as 4.3 rebounds and 3.8 assists. Gentile (16.0 ppg, 5.0 rpg, 4.2 apg) and Bargnani (13.8 ppg) could also cause the Israel defense plenty of problems, with the Italians second in the tournament with 86.8 points per game.However, the Italians have looked vulnerable on defense, allowing 86.8 points per contest, second-worst in the tournament.“Italy beat Spain, has four NBA players and plays in a style which will cause us plenty of match-up problems,” said Israel coach Erez Edelstein. “Everyone thought that Spain would be a tougher opponent, but that is a mistake. I’d prefer if the second round would also be played in a group format, but on the other hand it might be easier to register an upset in a single game.”Israel is just two wins away from closing in on Olympic qualification, with the finalists to book a direct ticket to the 2016 Rio Games and the teams who will finish third to sixth to advance to the FIBA Olympic Qualifying Tournament.A win over Italy will mean the blueand- white will have two opportunities to progress to the qualifying tournament, which will take place next July, either by triumphing in the quarterfinals or by losing in the last eight and then winning its following game for 5th-6th positions.Should Israel beat Italy, it will play the winner of the contest between Lithuania and Georgia in the quarterfinals on Wednesday.“This game will be very different to the first five and we all understand the situation,” said Eliyahu. “The Italians are excellent and this will be a battle. If we lose it is all over, but we know that in one game anything can happen.”