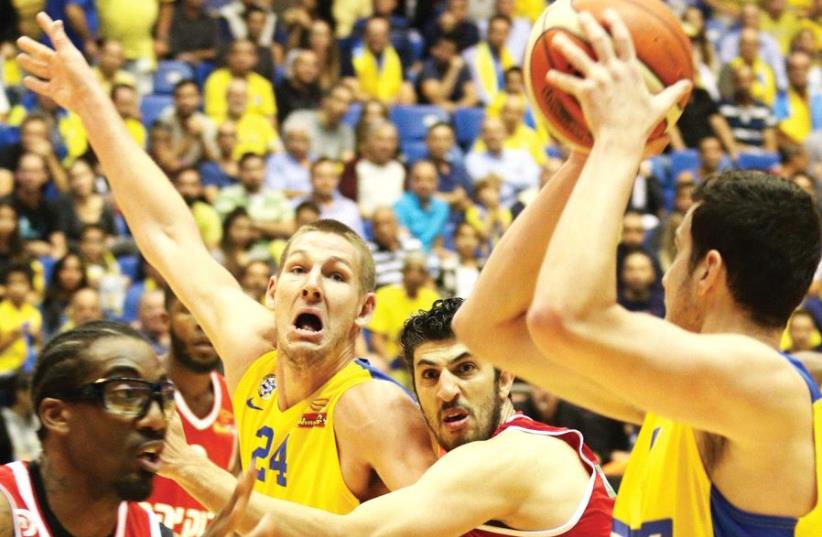 Hapoel Jerusalem and Maccabi Tel Aviv register another chapter in their bitter rivalry tonight when they meet in the State Cup final, with Maccabi captain Guy Pnini (right), Jerusalem center Amar’e Stoudemire (left), Tel Aviv center Colton Iverson (second left) and Jerusalem’s veteran forward Lior E
(photo credit: ADI AVISHAI)
Advertisement
Hapoel Jerusalem and Maccabi Tel Aviv meet in the State Cup final for the second time in three years on Thursday night, but it will also be only their second clash in a local title game since 2008.Maccabi beat Jerusalem in the cup final in 2015 in the last title showdown between the two powerhouses of Israeli basketball, but the rivalry has since been dominated by Hapoel.Jerusalem has won five of six meetings since that final, including all three clashes at the Jerusalem Arena, which will be the venue for Thursday’s game as well.Hapoel also enters the game on the back of 12 wins from its past 14 games over all competitions, including a 74-63 victory over Maccabi at Yad Eliyahu Arena in BSL action just last Sunday.Jerusalem hasn’t won the cup since beating Maccabi in the 2008 final, but continued to gather momentum with Monday’s 68-59 win over Hapoel Holon in the semifinals, which came on the back of its progress to the Eurocup quarterfinals from first place in its Top 16 group.Jerusalem is targeting its fifth straight win over all competitions since the start of February, while Maccabi is hoping to combine three victories in a row for the first time since last November.Tel Aviv beat Spain’s Baskonia Vitoria for just its third win in the past 13 Euroleague games last Thursday before edging Maccabi Ashdod 95-89 in Monday’s semi.Despite returning to winning ways, the form Maccabi displayed in those victories gives it little reason for optimism entering the final.The yellow-and-blue will, however, try and draw some confidence from its stranglehold on the competition in recent years, even when all else has failed.Maccabi is targeting an eighth straight triumph on Thursday night, with its last defeat in the cup coming back in December 2008 when it was beaten by Ironi Nahariya in the last 16.Jerusalem made the most of Maccabi’s lack of depth in the paint when they met in league action last week. Amar’e Stoudemire scored 18 of his gamehigh 24 points in the second half to give Hapoel a comfortable win.Maccabi coach Ainars Bagatskis will try and find a creative solution for stopping Stoudemire, and unlike last week, will have forward Devin Smith to help the cause on Thursday. The American veteran led Maccabi to the win over Jerusalem in the cup final two years ago, scoring a game-high 27 points.Maccabi will also need top scorer Andrew Goudelock to improve on his performance against Ashdod in which he scored just two points, failing to net a single field goal.“I wasn’t under any particular pressure,” said Goudelock. “I just missed some shots. But the best thing that can happen when that is the case is that your teammates play well.”The American guard wasn’t too concerned that the team almost squandered a big lead once more.“We take our foot off the gas and allow teams to get back into the game, but at least this time, and also in the game against Baskonia, we didn’t collapse and fought back,” he explained.Jerusalem forward Lior Eliyahu believes the previous meetings between the teams are of little significance ahead of the final.“You can’t compare a league game to a cup game,” said Eliyahu. “Both teams have problems, but they will look to overcome them and win.”Jerusalem coach Simone Pianigiani insisted there are no favorites in the final.“We have a chance, but in a game like this anything can happen,” said the Italian. “The most important thing is that we control our emotions.”