“Of our 11 matches, six ended in a third set. We lost five of those and a victory in any of them would have changed everything." 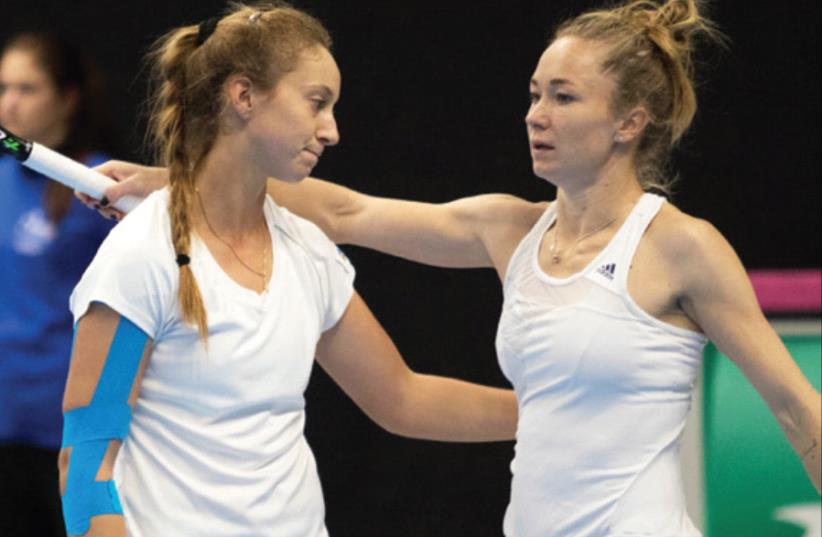 Israel’s Julia Glushko (right) and Shelly Krolitzky (left) lost all three of their doubles matches together in Fed Cup Europe/Africa Zone Group I action Estonia, which eventually led to the team’s relegation to Group II on Saturday night.
(photo credit: NIR KEIDAR/ISRAEL TENNIS ASSOCIATION)
Advertisement
For the first time since 1999, Israel’s Fed Cup team will play in Europe/ Africa Zone Group II next year, being relegated from Group I on Sunday night following a disappointing showing in Tallinn, Estonia.After losing all three of its Pool D ties to Bulgaria, Estonia and Serbia, Israel dropped to a 2-1 loss to Georgia on Saturday in a playoff against relegation to Group II in women’s tennis premier national team competition.Julia Glushko and Shelly Krolitzky suffered a 6-4, 4-6, 6-3 defeat to Ekaterine Gorgodze and Oksana Kalashnikova in the decisive doubles rubber which ended after midnight.Glushko and Krolitzky lost all three of their doubles matches in Tallinn.Glushko won two of the three singles matches she played, including against Georgia’s Sofia Shapatava on Saturday, while Deniz Khazaniuk triumphed in two of her four singles rubbers, but lost to Gorgodze on Saturday.Khazaniuk, who claimed her maiden national title in December, was called up to the squad for the first time in more than four years after previously missing out due to her fall out with Shahar Pe’er and Glushko.With Pe’er no longer part of the team, captain Tzipi Obziler and the Israel Tennis Association chose to wipe the slate clean, but Khazaniuk will not want to remember much of her first on-court Fed Cup experience.“We experienced a very difficult week,” said Obziler. “Of our 11 matches, six ended in a third set. We lost five of those and a victory in any of them would have changed everything. I’d like to thank the players for giving their all until the last point. In the coming days we will begin working on the next challenge facing us.”