FIFA head: Fixing the Israeli-Palestinian soccer crisis is a priority

The head of the Palestinian Football Association Jibril Rajoub has said that the presence of the settler teams is illegal under FIFA’s own rules. 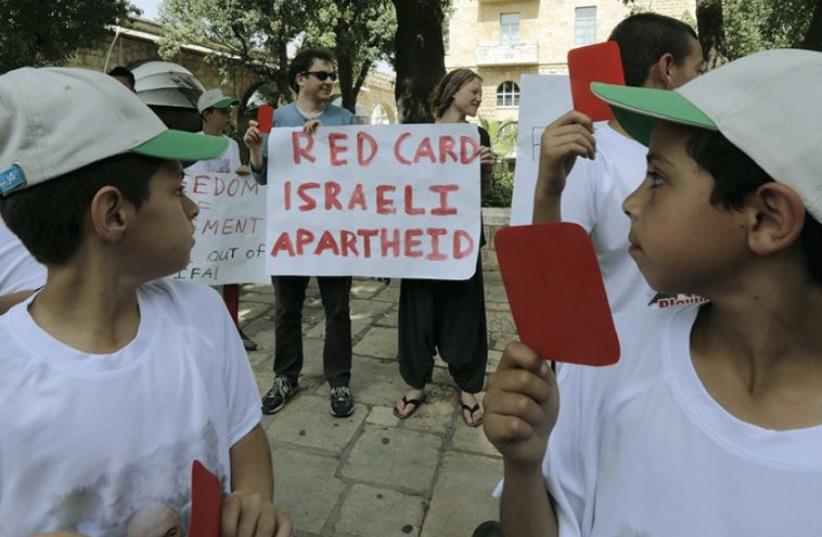 PALESTINIAN KIDS protest in favor of ejecting Israel from FIFA, the soccer federation
(photo credit: REUTERS)
Advertisement
Resolving the soccer dispute between Israel and the Palestinian Authority is a top priorities for the Fédération Internationale de Football Association, Gianni Infantino, head of the organization, told the media this week.FIFA has been tight lipped in the past months over a campaign by the Palestinian Authority to force the Israel Football Association to drop six of its teams that are located in West Bank settlements.The PA is expected to bring the matter before FIFA’s executive board, which is slated to meet in Switzerland on October 13 and 14.In advance of that meeting, Infantino gave an interview on the subject to the Agence France-Presse, in which he said: “This is one of my priorities and our priorities. I have not yet gone into the area, simply because the situation is such that at the moment the conditions are not there yet, but we’re working on it.”The issue is not a new one for FIFA. At the 65th FIFA Congress in 2015, the PA failed to sway the international soccer organization to suspend Israel altogether over the settlement issue.But its efforts led to the creation of a FIFA Monitoring Committee for Israel-Palestine, to oversee issues affecting the development of soccer in the Palestinian territories.The head of the committee, South African former government minister Tokyo Sexwale, led a FIFA delegation that visited Israel and the Palestinian territories over the summer.According to FIFA, its work focused on “measures currently being developed regarding permit applications and security- related delays,” adding that progress had been made in those areas.The delegation discussed the issue of the six Israeli clubs in the settlements. The Palestinians have claimed that the settler teams cannot be part of the Israeli league because they play on “occupied territory” that is not recognized under international law as belonging to Israel.The monitoring committee is due to present a report on the matter at the October meeting of the FIFA board.Infantino told AFP that he had met with Sexwale on Wednesday to discuss the matter.The issue, Infantino said, should be soccer. But it has “become a political issue, for which the world has not yet found a satisfactory solution. I am always confident that with dialogue, with discussion and by talking only of sport and by leaving out the politics, we can find a solution,” Infantino said.The head of the Palestinian Football Association, Jibril Rajoub, has said that the presence of the settler teams is illegal under FIFA’s own rules.“The time is overdue for FIFA to make a decision based on their own statutes and code of ethics, practice and values.”Legal expert Eugene Kontorovich argued in a Washington Post opinion piece that the settler teams are not a violation of FIFA rules.“Nothing in the FIFA statutes equates ‘territory’ with sovereign territory. Instead, territory, as is often the case in international texts, means jurisdiction.“This is because FIFA is not a border demarcation body.That is why FIFA clearly separates any question of sovereign statehood and territory from FIFA membership, by not requiring that member federations be recognized states,” he wrote.