Blatter said he was hopeful that the issue could be resolved following meetings next week with Netanyahu and Abbas. 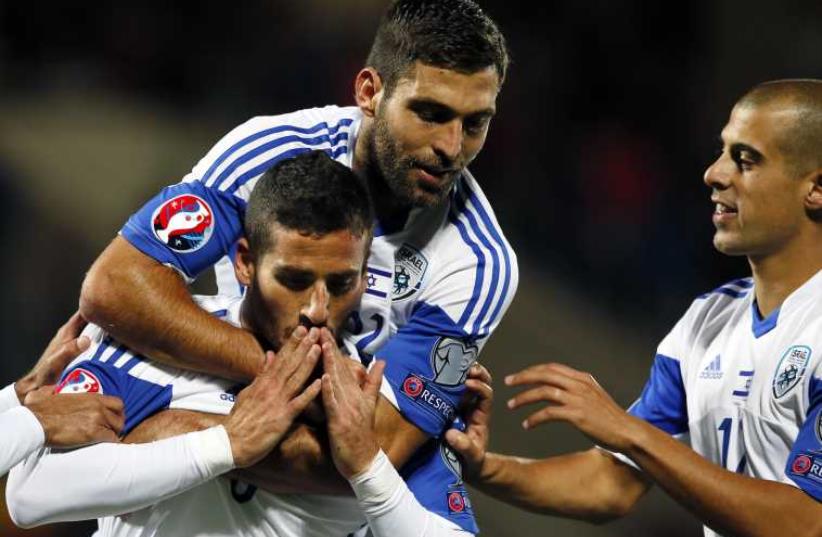 Israel's Tomer Hemed (L), Itay Shechter (C) and Tal Ben Chaim celebrate a goal against Andorra during their Euro 2016 qualification soccer match
(photo credit: REUTERS)
Advertisement
FIFA head Sepp Blatter, who runs the world’s largest body of organized soccer, said on Friday that it is incumbent upon Israel to “make some concessions” to the Palestinians in order to defuse the latest attempt by Ramallah to compel Israel’s ouster from the organization.AFP reported on Friday that Blatter said he was hopeful that the issue could be resolved following meetings next week with Prime Minister Benjamin Netanyahu and Palestinian Authority chief Mahmoud Abbas.Blatter is quoted by AFP as saying that the Israeli premier "would not receive the FIFA delegation if he is not ready to make some concessions, I am sure."The heads of the Israeli and Palestinian soccer associations agreed to "pursue dialogue" after meeting at FIFA headquarters on Sunday, soccer's governing body said in a statement.However, FIFA did not say whether the Palestine association (PFA) had agreed to drop a proposal for a vote at the FIFA Congress later this month to suspend Israel from international football."The main purpose of the meeting was to discuss the request made by the PFA for a proposal to suspend the Israeli FA at the upcoming FIFA Congress," said FIFA, adding that Blatter also took part in the meeting."Both member associations agreed to pursue the dialogue.""The discussions followed previous individual talks held by both member associations with FIFA over the past weeks," it added."FIFA President Blatter praised the receptiveness shown by both member associations in discussing the matter at the home of FIFA and confirmed that he will travel to Israel and Palestine to meet their respective FA Presidents and Heads of State ahead of the FIFA Congress."Last year Jibril Rajoub, the PFA chief, agreed to drop a resolution urging delegates to take sanctions against Israel at FIFA's Congress in Sao Paulo but he said earlier this month that he would press ahead with the same proposal in Zurich on May 29.He added he "would not make the concessions" he made when withdrawing the proposal a year ago because nothing had improved in the way Israel "were persecuting Palestine footballers, athletes and the movement of sporting equipment"."Enough is enough," Rajoub said after attending the signing ceremony of a Memorandum of Understanding between the Asian Football Confederation (AFC) and Union of Arab Football Associations (UAFA) aimed at building more co-operation between the two organizations.