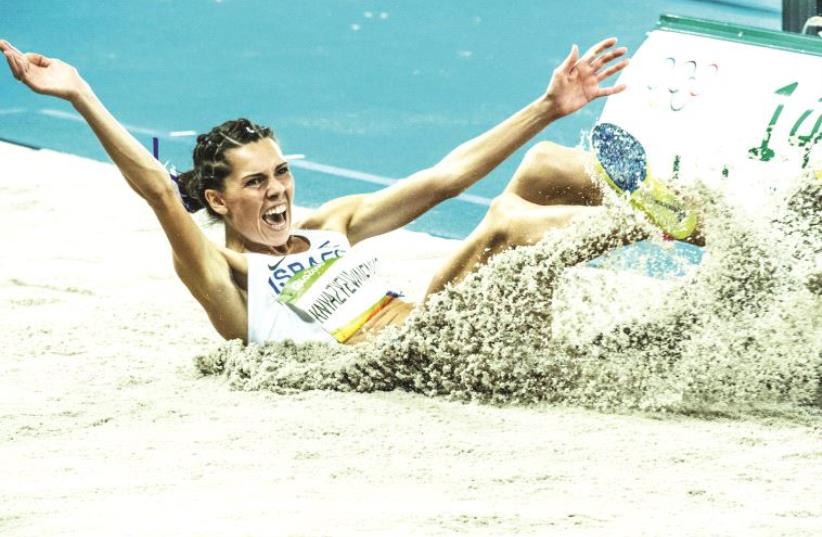 Israeli triple jumper Hanna Knyazyeva-Minenko
(photo credit: ASAF KLIGER)
Advertisement
Six centimeters are all that separated Hanna Knyazyeva-Minenko from Israel’s 10th Olympic medal on Sunday night.The 1.79-meter triple jumper was targeting Israel’s third medal at the Rio Games and first in any Olympics in athletics, but had to settle for fifth place, jumping 14.68 meters with her best attempt.The 26-year-old became just the second Israeli to win a medal at the athletics world championships last summer, following in the footsteps of the great Alex Averbukh.She struggled with a foot injury for much of 2016, but recovered in time to claim a silver medal at the European Championships and was hoping to scale the Olympic podium in Rio.Knyazyeva-Minenko, who finished the London 2012 final in fourth place while still representing Ukraine, only barely qualified for the final after fouling in her first two attempts.But she ended up equaling the best-ever finish for an Israeli in an Olympic athletics competition set by high jumper Konstantin Matusevich, who ended his final in Sydney 2000 in fifth position.“I did everything to represent Israel with honor,” said Knyazyeva-Minenko, who began representing Israel in 2013 after leaving Ukraine following her marriage to Anatoly Minenko. “I wanted a medal after previously finishing fourth, but this was a tough year as I underwent surgery. Nevertheless, I was close to my personal best at the Olympic Games.”Knyazyeva-Minenko recorded a personal best distance of 14.78m on her way to the silver medal at the world championships in Beijing last year.The final was won by Caterine Ibarguen of Colombia, who built on several years of dominance by sweeping to victory with a season’s best leap of 15.17 meters.The two-time world champion Ibarguen was the hot-favorite going into the Rio Games after winning 36 of her last 37 competitions excluding qualifying events.Ibarguen’s young challenger Yulimar Rojas of Venezuela took silver with a 14.98m jump, while Kazakhstan’s London Olympics champion Olga Rypakova registered 14.74m in the fifth round to take the bronze.After opening with a leap of 14.25m, Knyazyeva-Minenko registered her best result in the fourth round, but at no stage was she ranked among the top three in the competition.“This was my first big competition this year with all the big guns as I didn’t compete in many events because of the injury,” said Knyazyeva-Minenko. “Had I been healthy this year the result could have been different. I hope to show that in Tokyo 2020.”Israeli high jumper Dmitry Kroyter was also in action on Sunday night, but he could only manage a disappointing 2.17m in the men’s qualifiers, finishing in 41st place out of 43.Kroyter was on the verge of retirement two years ago due to injury, but under the urging of his coach he decided to visit a specialist in Germany and he booked his place in Rio last July with a career-best jump of 2.29m. He came nowhere near to emulating it on Sunday and didn’t hide his frustration.“My result is not good enough. In a competition like this you have to register a much better result if you want to come close to reaching a final and I couldn’t do that,” he said. “I feel like I disappointed a lot of people. I didn’t meet my own expectations.I’m already thinking about what I can do better to make sure I’m more ready next time.”Elsewhere, Eyal Levin and Dan Froyliche are in 19th place overall out of 26 after seven races in the men’s 470 Class competition.In the women’s 470 Class event, Gil Cohen and Nina Amir are also in 19th position, out of 20 teams.Anastasia Gloushkov Leventhal and Ievgeniia Tetelbaum ended the synchronized swimming duet competition in 20th place out of 24 on Monday. The Israeli team registered a score of 79.4488 in the technical routine for an overall score of 158.3488.Gloushkov Leventhal became the first Israeli woman to compete in four Olympics after also participating in Athens 2004, Beijing 2008 and London 2012 with previous partner Inna Yoffe. Gloushkov Leventhal gave birth to a son after the London Olympics and was away from the pool for over a year.Meanwhile, windsurfer Maayan Davidovich is already looking forward to Tokyo 2020 after just missing out on a medal in the women’s RS:X competition on Sunday.“I expected more from myself,” said Davidovich, who ended the event in seventh place overall. “I wanted to leave Rio with a better result. I have no regrets but I know I could have done better. I felt really good from the start, but I wasn’t good enough. I hope to do better in Tokyo. I’m still not content.”Only one Israeli is set to be in action on Tuesday, with weightlifter Igor Olshanetskyi to compete in the over-105 kilogram category.Olshanetskyi was only added to the delegation at the last moment when the Israel Weightlifting Federation was unexpectedly handed a wild-card following the suspensions handed to Russia, Kazakhstan and Belarus for anti-doping violations.The 30-year-old Israeli ended the European Championships in 12th place in April, lifting a total of 366kg, 163kg in the snatch and 203kg in the clean and jerk. He was 21st at last year’s World Championships.