Levy is set to be handed a four-year deal, with the IFA having an exit clause after the conclusion of World Cup 2018 qualifying. 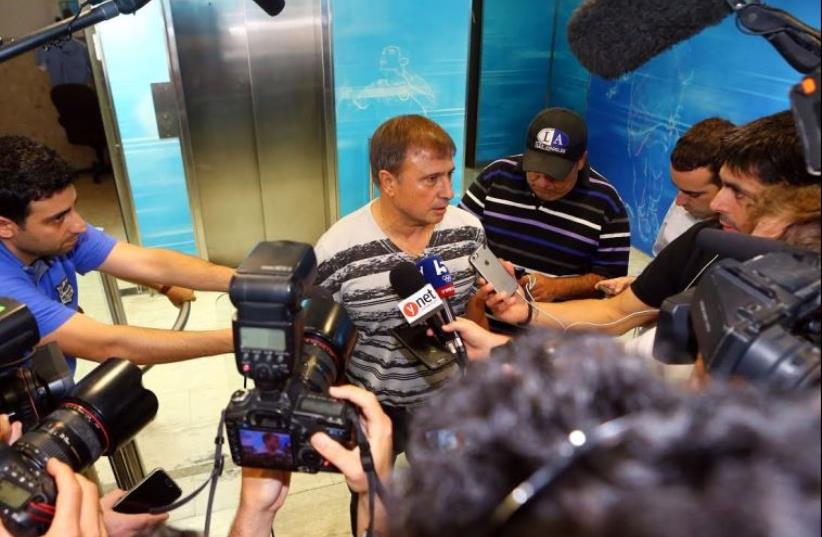 Elisha Levy meets members of the media
(photo credit: UDI ZITIAT)
Advertisement
A coaching odyssey that began in Beit She'an 27 years ago reached its pinnacle on Wednesday when Elisha Levy was named as the new coach of the Israel national team.The 58-year-old, whose first coaching job was at Hapoel Beit Shean in the third division, was unanimously selected to replace Eli Gutman by the Israel Football Association's five-man search committee. IFA chairman Ofer Eini, vice chairman Tamir Gilat, former Bnei Yehuda chairman Moshe Damayo and former national team players Tzvika Rosen and Haim Revivo, picked Levy ahead of Guy Luzon, Eli Ohana, Ran Ben-Shimon and Nir Klinger, who were also all interviewed for the position on Tuesday.Levy spent most of the first 19 years of his career being disregarded and disrespected, but after succeeding at Bnei Sakhnin he was finally handed a chance at a big club with Maccabi Haifa in 2008. He guided the Greens to two Premier League championships and a place in the Champions League group stage in four years with Haifa before moving to Hapoel Beersheba. Under his guidance, Beersheba finished in second place in 2013/14 and ended last season in third, as well as reaching the State Cup final. Nevertheless, Beersheba chose against renewing Levy's contract and he decided not to take any other offer in the hope of being awarded the Israel job.With the IFA having a relatively small budget to pay the new coach, only local names were considered for the job and Levy's experience and demeanor were what ultimately set him apart from the competition."I couldn't be happier on this day, despite the magnitude of the responsibility placed on my shoulders," said Levy. "The Israel national team was, is and will forever remain the peak of the aspirations of every player and coach. As someone who has been through the entire course, known ups and downs, experienced sublime moments of joy as well as disappointments, the Israel national team is the summit of this journey, of which I wouldn't change a thing."Levy is set to be handed a four-year deal, with the IFA having an exit clause after the conclusion of World Cup 2018 qualifying. The national team doesn't play its first World Cup 2018 qualifier until September 5 when it hosts Italy. Israel's hopes of reaching the World Cup for the first time since 1970 were already all but dashed after being paired with former World Cup winners Spain and Italy in qualifying Group G. Only the winners of each group will qualify automatically, with the eight best runners-up to advance to home-and-away playoffs. Israel will also face Albania, Macedonia and Liechtenstein, and the main target facing Levy will be to build a side capable of challenging for a place in Euro 2020.His first match at the helm will be a friendly against Serbia in Novi Sad on May 31. The IFA initially planned to hold a training camp in the US between May 27 and June 2 and play a friendly against Jamaica. However, after the option of facing Jamaica fell through, the IFA instead arranged a camp in Serbia between May 27 and 31, the highlight of which will be a showdown with the hosts."Elisha is a veteran coach with experience and mental toughness, which is something the national team needs," said Eini. "I think the contract should be for four years and if he does well it might end up being for longer."