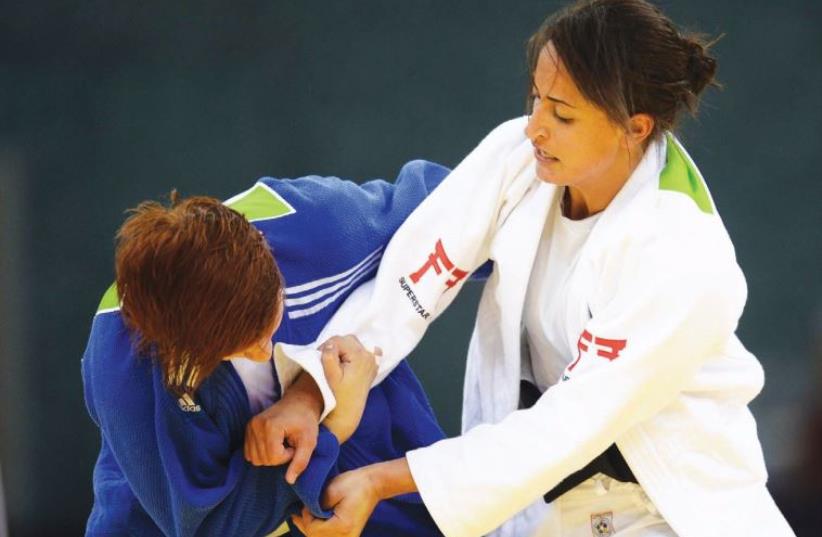 Israeli judoka Yarden Gerbi (right) experienced a disappointing result at the World Championships, losing in the semifinals and the battle for the bronze medal in Astana, Kazakhstan, August 27, 2015
(photo credit: OLYMPIC COMMITTEE OF ISRAEL)
Advertisement
Yarden Gerbi’s quest to become the first Israeli to win three medals at the World Judo Championships ended in disappointment on Thursday when she suffered heartbreaking defeats in the semifinals and the battle for the bronze medal in the women’s under-63 kilogram competition in Astana, Kazakhstan.Gerbi was the first Israeli to be crowned world champion two years ago and followed it up by claiming a silver medal last year, joining Yael Arad (1991 - bronze, 1993 - silver) as the only Israelis to win multiple medals at the event.Only six Israelis have ever scaled the podium at the Worlds, with Golan Pollack becoming the latest on Tuesday, joining Gerbi, Arad, Oren Smadja (1995 - silver), Arik Ze’evi (2001 - silver) and Alice Schlesinger (2009 - bronze).Gerbi entered the competition as the world No. 3, and after receiving a bye into the second round, she beat Hannah Martin of the USA. She defeated Ana Cachola and Anicka Van Emden in the next two rounds to book a semifinal showdown with defending champion Clarisse Agbegneou.Gerbi beat the Frenchwoman in the world championships final two years ago before losing to her good friend in last year’s title bout.With nothing to separate the two after five minutes on Thursday, the semi went into sudden death where Agbegneou registered an ippon to book her place in the final.Gerbi could have still claimed a bronze medal, but she struggled against Munkhzaya Tsedevsuren of Mongolia in the repechage and ended the event empty handed.Gerbi, who won the bronze medal at the European Championships two months ago, claiming her third medal in four years at the continental showcase, will now turn her entire focus to preparing for next summer in Rio where she hopes to become the fourth Israeli judoka to take an Olympic medal.