Hapoel aims to get Eurocup campaign on track 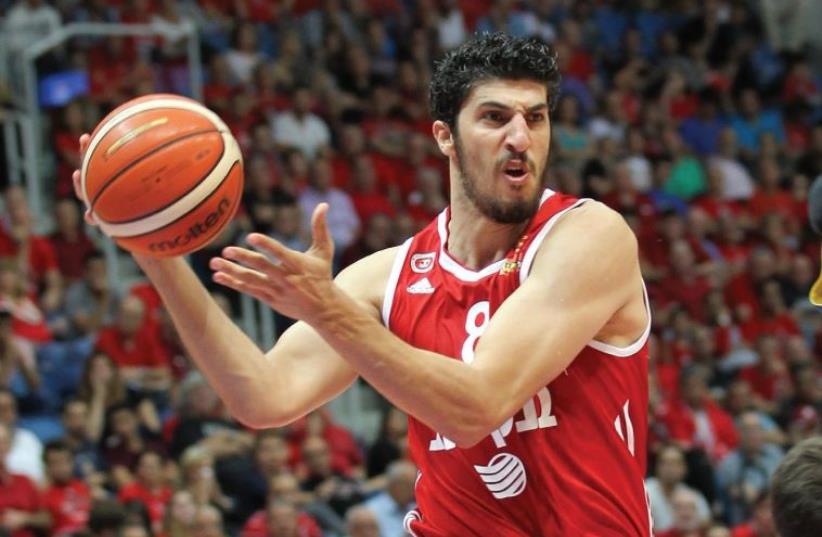 Hapoel Jerusalem forward Lior Eliyahu couldn’t help his team avoid a 92-71 defeat in Eurocup action at Nizhny Novgorod in Russia
(photo credit: DANNY MARON)
Advertisement
After beginning its Eurocup campaign with a 21-point thrashing at the hands of Nizhny Novgorod, and with the memory of last season still fresh in its mind, Hapoel Jerusalem knows it can’t afford anything but a win when it hosts Lithuania’s Neptunas Klaipeda at the Jerusalem Arena on Wednesday night.Hapoel suffered a humbling 92-71 loss in Russia last week, with the hosts dominating the second half after coming back from a double-digit deficit in the first.After finally claiming its first local championship last season, Jerusalem is hoping to once more return to prominence in Europe following several disappointing campaigns.Despite winning the BSL title last season, Jerusalem was forced to settle for a place in the Eurocup yet again, with the Euroleague rejecting its request to receive a wild-card.Regardless, Hapoel still has plenty to prove this season after registering an embarrassing 2-8 record in the Eurocup regular season in 2014/15. One of the turning points in that campaign came when Jerusalem dropped to a tight home defeat to Krasny Oktyabr Volgograd to fall to 0-2, ultimately losing six of its first seven games.Hapoel is desperate to avoid a repeat of that scenario this season and knows it must start by beating Neptunas at home. Neptunas suffered a 94-90 defeat to Galatasaray in its group opener.Jerusalem bounced back from the defeat in Russia by beating Hapoel Holon 89-73 to improve to 2-0 in the BSL on Saturday night, with new signing Matt Janning watching from the stands.The 27-year-old shooter, who averaged 6.9 points in 21.6 minutes for Anadolu Efes Istanbul in the Euroleague last season, was brought in to replace last season’s BSL finals MVP, Bracey Wright, who was released for what the club described as a “blatant contract violation.”According to Hapoel, Wright received permission to travel to the US to take care of personal issues, only to instead fly to China in order to negotiate a contract with a local club. Jerusalem is suing the player for over NIS 2 million for damages.“The team looks good and I think I’ll enjoy playing in Jerusalem,” said Janning.“I can score, but in recent years I also showed that I can be used as a playmaker.”Israeli guard Bar Timor stepped up in Wright’s absence, equaling his career high of 22 points in the win over Holon.“I’m happy we got this win after the game we had in the Eurocup,” said Timor.“The difference between the leagues is in intensity. We fell apart in the second half in Russia, but we have put that game behind us and are focusing on Wednesday.Hapoel Jerusalem is a club that aims to go far in every competition, in the BSL and the Eurocup.”