Hapoel Beersheba has work cut out for it vs Ludogorets

After impressive conquest of Honved, Beersheba enters 3rd qualifying round with sidelined stars. 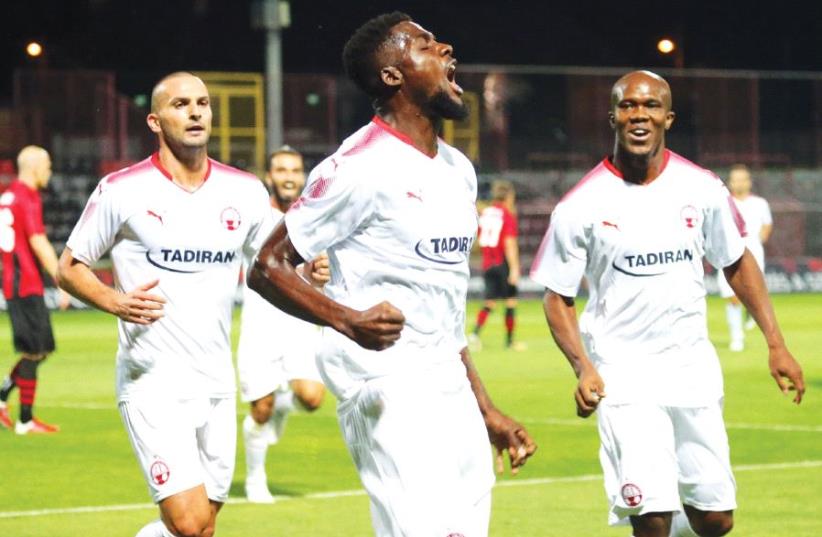 Hapoel Beersheba could use another scoring contribution from midfielder John Ogu (center) tonight, with striker Ben Sahar (left) among several attacking players to miss the first leg of the Champions League third qualifying round match against Bulgaria’s Ludogorets Razgrad.
(photo credit: UDI ZITIAT)
Advertisement
The season has barely begun, but Hapoel Beersheba is already dealing with its first injury crisis of 2017/18.Beersheba hosts Bulgarian champion Ludogorets in the first leg of the Champions League third qualifying round at Turner Stadium on Wednesday, aiming to take another step towards the group stage ahead of the return leg in Razgrad next week.The two-time reigning Israeli champion will have to do so without several key players, especially on the offensive end.Beersheba secured its progress to the third qualifying round with last week’s 3-2 win at Honved in Budapest, completing a 5-3 aggregate victory. But it came at a cost, with striker Ben Sahar suffering a shoulder injury that could keep him out for over two months.Veteran striker Elyaniv Barda replaced Sahar in Budapest, but lasted only 27 minutes, leaving with a thigh injury. He has returned to training in recent days and is set to be included in the team’s squad on Wednesday. Nevertheless, he isn’t fit enough to start.Israeli forward Niv Zrihen is also missing through injury, while Spanish attacking midfielder Isaac Cuenca has yet to make his debut for the club, spraining his ankle shortly after joining the team in training.The 26-year-old has 16 La Liga appearances to his name from his time at Barcelona and played for Granada CF in the Spanish top division last season. Cuenca is supposed to help fill the void left by the departure of Maor Buzaglo, but he will have to wait at least another week until he sees any action.Beersheba added 28-year-old Czech striker Tomas Pekhart to its squad last weekend, but he only joined the team in training on Tuesday and isn’t expected to feature.That all means that coach Barak Bachar will have to rely on Mohammad Ghadir as his lone striker. The 26-year-old joined Beersheba from Belgian club Lokeren in February 2016, but has struggled for playing time, starting in just five Premier League matches since. He will get his chance on Wednesday, with Beersheba also counting on another strong performance from Nigerian forward Anthony Nwakaeme.He scored two goals last week and looked unstoppable in both legs against Honved despite having a lucrative move to China blocked by the club a week earlier.“The win in Budapest gave us confidence and I hope we can build on that,” said Bachar, who is hoping his team can finally keep a clean sheet on Wednesday.“We are still early in the season and we have plenty to work on. But all in all we are doing alright.”Beersheba is aiming to reach the Champions League group stage for the first time in club history after missing out by a single goal last season, losing to Celtic of Scotland 5-4 on aggregate in the final playoff round.By overcoming Honved, Beersheba has already given itself something to fall back on, with the losers in the Champions League third qualifying round to receive a place in the Europa League playoffs.Beersheba stunned Greek champion Olympiacos in the third qualifying round last season, and while Ludogorets is not considered to be of the same class, it also enters the tie fully expecting to advance to the playoffs.Ludogorets has played in the Champions League group stage in two of the past three seasons, finishing third in Group A last season behind Paris Saint Germain and Arsenal, and ahead of Basel.Ludogorets, which has 10 Brazilian players on its squad, registered an impressive comeback in the second leg of the second qualifying round last week. After losing 2-1 on the road in the first leg at Zalgiris Vilnius, the Bulgarians found themselves in a 1-0 hole early in the second leg before bouncing back with four unanswered goals.“I’m expecting two very difficult matches against Beersheba,” said Ludogorets coach Georgi Dermendzhiev. “We will have to be at our best.“We have a similar style to Beersheba and I think this is going to be a very tight tie that will only be decided at the very end.”