Beersheba faces what is still one of European soccer’s biggest names, in the fabled atmosphere of Celtic Park with all the pageantry of the Champions League, including the famed competition anthem. 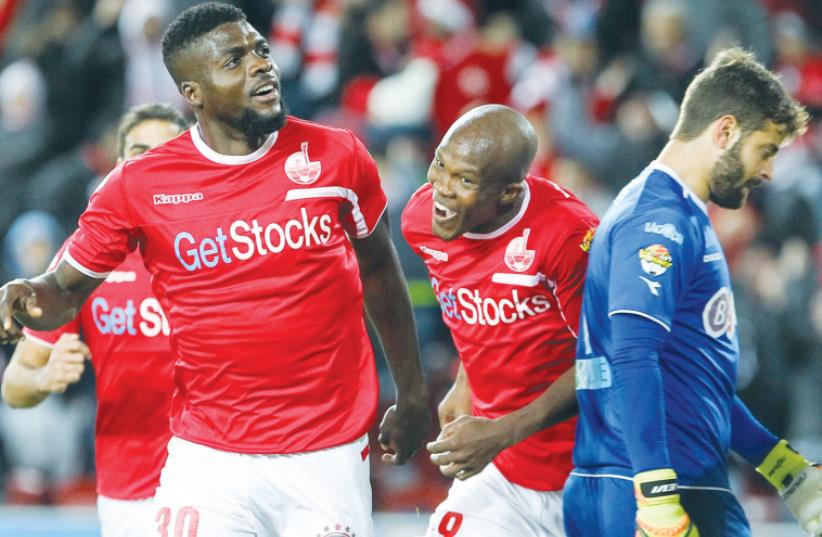 Hapoel Beersheba midfielder John Ogu (left) celebrates after scoring his team’s second goal in last night’s 2-0 victory over Maccabi Netanya at Turner Stadium.
(photo credit: DANNY MARON)
Advertisement
Hapoel Beersheba has an opportunity to prove it is truly ready for the Champions League group stage when it visits Celtic in Scotland in the first leg of the playoffs on Wednesday night.Beersheba faces what is still one of European soccer’s biggest names, in the fabled atmosphere of Celtic Park with all the pageantry of the Champions League, including the famed competition anthem.Beersheba is looking to become the sixth Israeli team to play in the Champions League group stage. Maccabi Tel Aviv qualified last season for the second time in club history (2004/05, 2015/16), with Hapoel Tel Aviv reaching the prestigious stage in 2010/11 and Maccabi Haifa doing so twice in the past (2002/03, 2009/10).Beersheba, which won its first local championship in 40 years last season, is targeting its second straight upset after stunning Greek powerhouse Olympiacos in the third qualifying round. Beersheba registered a 1-0 win in the second leg at Turner Stadium after the first leg in Athens ended in a 0-0 deadlock.Beersheba has already secured itself continental soccer deep into the winter, as even should it lose in the playoffs it will receive a place in the Europa League group stage.As a result, Beersheba is already guaranteed 5.4 million euro from UEFA prize money alone.For all its fame, Celtic has achieved limited success in Europe over recent seasons. The five-time defending Scottish champion has lost at the playoff stage of the Champions League two years in a row, suffering defeats to Maribor of Slovenia in 2014 and then to Malmo of Sweden last season.Celtic’s route to the playoffs this season has also been far from straightforward.It dropped to a humbling 1-0 loss to Lincoln of Gibraltar in the second qualifying round before overturning the deficit with a 3-0 home win.Celtic then overcame Kazakh side Astana 3-2 on aggregate in the third qualifying round, but only thanks to a stoppage-time penalty in the second leg at Celtic Park.Beersheba is hoping that the fact it hosts the return leg in the playoffs will prove to be decisive, but knows that it first most return home with a positive result from Scotland. Hapoel hasn’t conceded in its past three continental games, including in the away matches against Olympiacos and Sheriff Tiraspol in the second qualifying round, and another clean sheet would be a major step towards qualification for the group stage.Beersheba will be without injured captain Elyaniv Barda on Wednesday, but is confident Portuguese defender Miguel Vitor will recover in time to be named in coach Barak Bachar’s starting lineup.Israel international Nir Bitton has played for Celtic since August 2013 and he has warned his teammates of the threat posed by Beersheba.“It’ll be a tough game,” he told the official Celtic website. “They have good players, good attackers and are a good defensive team as they don’t concede a lot and we need to be ready for that. If you beat Olympiacos you must be a good side.“It’ll be two tough games, but we have to do our talking on the pitch,” he added. “First of all we have a home game, we need to make sure we get a good result at home with 60,000 fans, a full house and hopefully we’ll do it.”