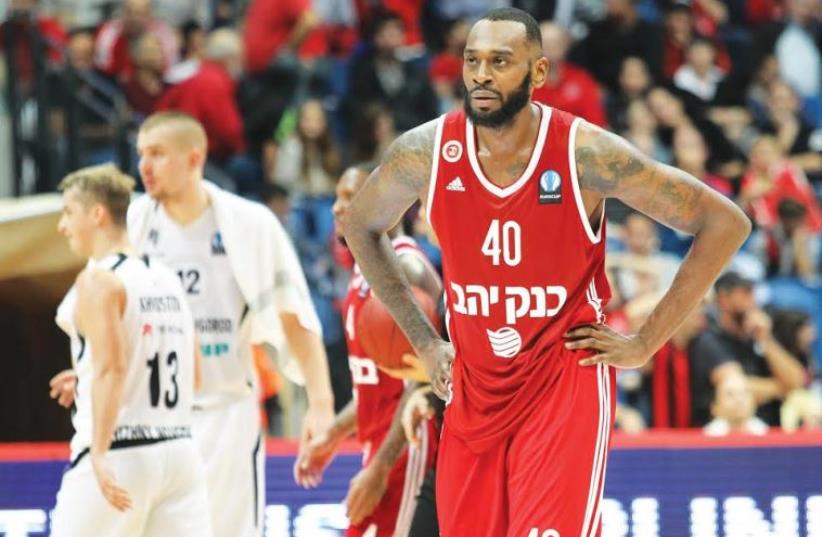 Hapoel Jerusalem’s D’or Fischer
(photo credit: DANNY MARON)
Advertisement
Hapoel Jerusalem’s hopes of advancing to the Eurocup Last 32 suffered a painful blow on Wednesday night following a 74-70 defeat to Nizhny Novgorod at the Jerusalem Arena.Hapoel dropped to its first home defeat of the season across all competitions and fell to 2-4 Eurocup play, one game back of a place in the top four in Group F from which teams will progress to the next round.Jerusalem entered the game on the back of its second straight BSL defeat and lost for the fourth time in five games on Wednesday, playing once more without the injured Lior Eliyahu and Yotam Halperin.“It’s a tough loss,” said Matt Janning.“We let up early in the first half and we were never able to recover. Now we have to come out and get a road win for sure next week.”Jerusalem visits Neptunas Klaipeda of Lithuania next Tuesday.Donta Smith led Jerusalem on Wednesday with 23 points, five rebounds and five assists, with E.J. Rowland scoring 12 points.Dimitriy Khvostov had 23 points, including seven three-pointers for Nizhny, which improved to 3-3.The visitors scored the first six points of the night, but Jerusalem was never too far behind, trailing by four points (22- 18) at the end of the first period. Smith’s three-pointer with four minutes remaining in the first half capped a 10-0 Hapoel run and gave the hosts their first lead of the night (30-28). The lead would go back and forth until the final two minutes of the period, with Nizhny ending the half with a 9-0 surge to take a 43-36 gap into the break.Novgorod’s margin reached double digits (47-36) early in the second half, but Jerusalem was within only four points (57- 53) ahead of the fourth frame.A Janning three brought the hosts within a single point (65-64) with 3:35 to go, but Jerusalem couldn’t complete the comeback. Hapoel had its chances, including with 10 seconds to play, but Rowland missed his shot and Novgorod secured the win from the free-throw line.Earlier Wednesday, Maccabi Rishon Lezion took a significant step towards securing its progress in the Europe Cup when it improved to 3-1 with a 67-66 win over Kalev/Cramo Tallinn of Estonia.Kalev entered the game winless, but gave Rishon a run until the final buzzer, with the visitors missing a chance to win the game after Shawn Dawson scored the go-ahead basket for the hosts (67-66) with 37.4 seconds remaining.Darryl Monroe had 18 points, 10 rebounds and six assists for Rishon, with Chris Wright finishing with 15 points and nine boards.Rishon got off to a slow start, trailing by five points (24-19) after 10 minutes. Kalev’s gap reached eight points (28-20), but the Estonians only led at the interval (36-35) after Rain Veideman’s basket to end the first half. A 9-0 run midway through the third frame saw Rishon seize the initiative, with Wright scoring eight points in the surge to give the hosts a 51-46 advantage.Kalev remained within striking distance (57-52) entering the final 10 minutes, but Rishon looked set to cruise to the win after scoring the first five points of the fourth quarter, with Avi Ben-Shimol’s basket opening a 62-52 lead with 7:45 minutes to play. However, the hosts would only score two points over the next seven minutes, allowing Rolands Freimanis to tie the score at 64-64 with 1:11 remaining.Dawson ensured though that Rishon finished with a win, completing a three-point play with 37.4 seconds left, with Kalev’s Janar Soo turning the ball over in the closing seconds to the relief of the hosts.“We were playing just 48 hours after the game against Maccabi Tel Aviv and the players gave their all and did a good job,” said Rishon coach Sharon Drucker. “We want this campaign to continue. We are enjoying ourselves in Europe.”