Hapoel grabs back control of its destiny 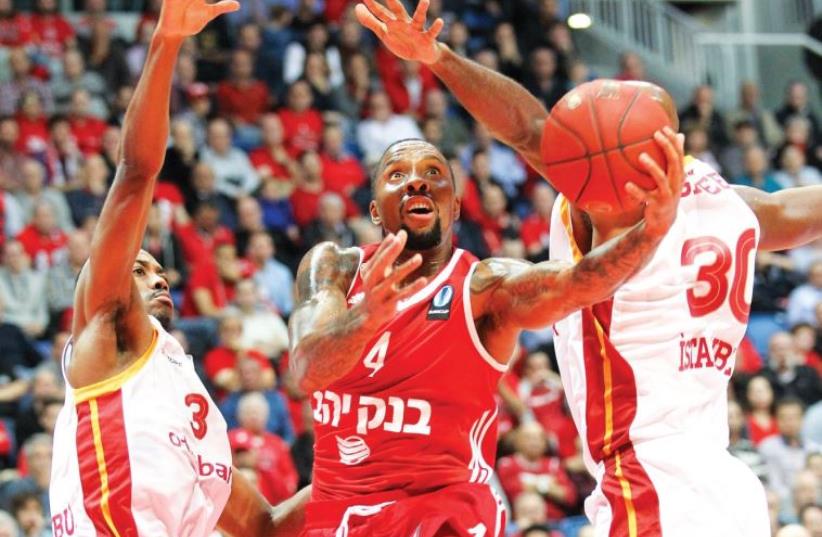 Hapoel Jerusalem guard E.J. Rowland (center)
(photo credit: DANNY MARON)
Advertisement
Hapoel Jerusalem kept alive its hopes of advancing to the Eurocup Last 32 with an impressive victory on Tuesday night, beating Galatasaray 86-82 at the Jerusalem Arena.Hapoel entered the game with a 2-5 record in Group F, two games back of a place in the top four – which will lead to a spot in the next round – with three games to play.Galatasaray had already secured its place in the Last 32 after winning six of its first seven games. However, Jerusalem toughed out a tight victory against the strong Turks and has its fate back in its own hands after other results in the group also went its way.Nizhny Novgorod’s 86-79 triumph over AEK Athens earlier Tuesday means that Jerusalem can leapfrog the Greeks into the top four with a win when the two meet at the Jerusalem Arena next week.A victory over AEK followed by a win at rock-bottom Krasny Oktyabr Volgograd to cap the campaign will guarantee Hapoel a place in the next round.E.J. Rowland led Jerusalem with 21 points and six assists on Tuesday, including a crucial basket with 29 seconds to play and the free-throw which secured the win. Josh Duncan added 17 points, while Donta Smith had 14 and Matt Janning 13.Hapoel finished the game with 22 assists, scoring 57.1 percent (28-of-49) from two-point range, 50 percent (6-of- 12) from beyond the arc and 80 percent (12-of-15) from the free-throw line.Errick McCollum led five Galatasaray players in double figures with 18 points, but missed two crucial shots from the line with 18 seconds remaining.“I’m really happy we won because there was a lot of pressure on the players and they coped with it very well,” said Jerusalem coach Danny Franco. “No matter what happened during the game the players stuck together. That is something which characterizes this team. Even when we are down, we continue to fight until the end. It doesn’t always guarantee we will win... but at least this team has character and spirit.”No more than two points separated the teams during the first quarter, which ended tied at 19-19. Galatasaray managed to open a five-point gap (28-23) early in the second frame, but Jerusalem responded by scoring the next six points and there was still nothing to split the teams at the break (43-43).Jerusalem was the first to open a relatively significant gap, with Smith’s basket off an offensive rebound giving the hosts a 62-54 advantage with 3:20 minutes to play in the third period. Galatasaray scored the next six points to close back within a single possession and Hapoel took a four-point edge (68-64) into the final 10 minutes.Jerusalem turned the ball over in its first two possessions in the fourth frame and the Turks tied the score at 68-68. However, Hapoel would replay with a 7-0 run, with Duncan’s lay-up giving the team a 75-68 lead. Galatasaray would never lose touch though, closing within a single point following Joey Dorsey’s basket with 1:19 minutes remaining.Rowland’s drive to the basket gave Hapoel an 83-80 lead with 29 seconds to play and the game would ultimately come down to proficiency from the freethrow line.McCollum, who had hit 66-of-71 freethrow attempts in the competition until that stage, missed two straight shots from the line with 18 seconds on the clock and Rowland clinched the win.“We just beat one of the best teams in the Eurocup,” said Rowland. “We still have a lot of potential and I think this is just the beginning.”