With plenty of upheaval on the horizon, Reds revel in BSL title, Amar’e’s status up in the air 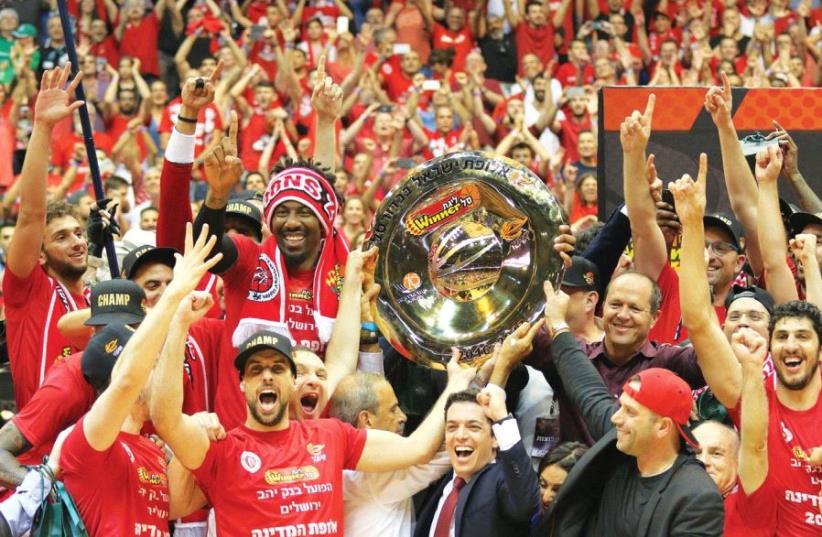 Hapoel Jerusalem
(photo credit: ADI AVISHAI)
Advertisement
Despite winning a second BSL championship in club history, as well as reaching the Eurocup semifinals, Hapoel Jerusalem is set to undergo significant changes this summer.After a long night of celebrations following Thursday’s win over Maccabi Haifa in the league final, Jerusalem owner Ori Allon and CEO Guy Harel turned their full focus to next season.Jerusalem will play in the Eurocup yet again in 2017/18, with the Euroleague still reluctant to hand Hapoel a place in the competition in its current 16-team format.The Euroleague is set to expand in the coming years and Hapoel is working to ensure it will be one of the team’s added to the competition.Regardless, Jerusalem could book its place in the Euroleague in 2018/19 by winning the Eurocup next season.Coach Simone Pianigiani is under contract for 2017/18, but is all but certain to leave, with both the club and the Italian feeling it would be best to move on after one season.Pianigiani refused to directly address his future following Thursday’s win, but made his intentions clear when he said that “I will be a Hapoel fan for the rest of my life starting from tomorrow.” He has been linked with a move back home to coach Olimpia Milano and Hapoel will not stand in his way.Jerusalem is likely to bring in a foreign coach once more, with Israeli candidates of the likes of Dan Shamir and Oded Katash to be considered should the search abroad come up short.The team’s roster will also undergo several changes. Despite a drop in production, veteran Israelis Yotam Halperin and Lior Eliyahu will continue for another season.Richard Howell will also be back for 2017/18 after playing a crucial role in the side’s triumph.Howell only joined the team from Hapoel Tel Aviv in mid-April, a week after he received Israeli citizenship due to his marriage the previous summer.With at least two Israeli players required to be on court at every moment, Howell’s presence allowed Pianigiani to play Jerome Dyson, Curtis Jerrells and Tarence Kinsey together for extended minutes.The team won five of its final six regular season games following Howell’s addition.After losing the first two games of the bestof- five series against Ironi Nahariya in the quarterfinals, Pianigiani inserted Howell into the starting lineup.Hapoel didn’t lose again, with Howell improving his averages to 9.6 points and 7.8 rebounds per game and the team outscoring its opponents by an average of 15 points while he was on court during those five victories.Dyson, Jerrells and Kinsey combined for 70 of Jerusalem’s 83 points in the final against Haifa while also providing stellar defense with Howell.After Dyson was named as the Final Four MVP following his 30-point performance in the final, Jerusalem seems likely to extend his stay, with Hapoel also having the option of retaining the services of Jerrells and Kinsey.A final decision is set to be made following the appointment of the new coach.Amar’e Stoudemire didn’t meet pre-season expectations, but he is expected to continue for another campaign, even though he was noncommittal following the final.“We’ll see,” he answered when asked about next season. “I have to see what the situation is.“I came here to win and was able to accomplish that so it is amazing,” added Stoudemire, who averaged 6.4 points and 4.4 rebounds in 13.6 minutes over five post-season encounters. “It was a roller- coaster ride. It was somewhat challenging, but we were able to persevere and we got the championship. It makes it all worth it.”Isaac Rosefelt and Travis Peterson will leave, with negotiations with Bar Timor regarding a contract extension set to intensify.Gal Mekel, Yogev Ohayon and Sylven Landesberg may all figure into Hapoel’s plans should they not continue at Maccabi Tel Aviv.“We have controlled Israeli basketball for the past three years,” exclaimed beaming owner Allon. “This was the greatest season in Hapoel Jerusalem’s history.”