Jerusalem opened a double- digit gap in the first quarter and never looked back, improving to 6-0 in the post-season and registering its 21st win from the past 23 BSL games overall. 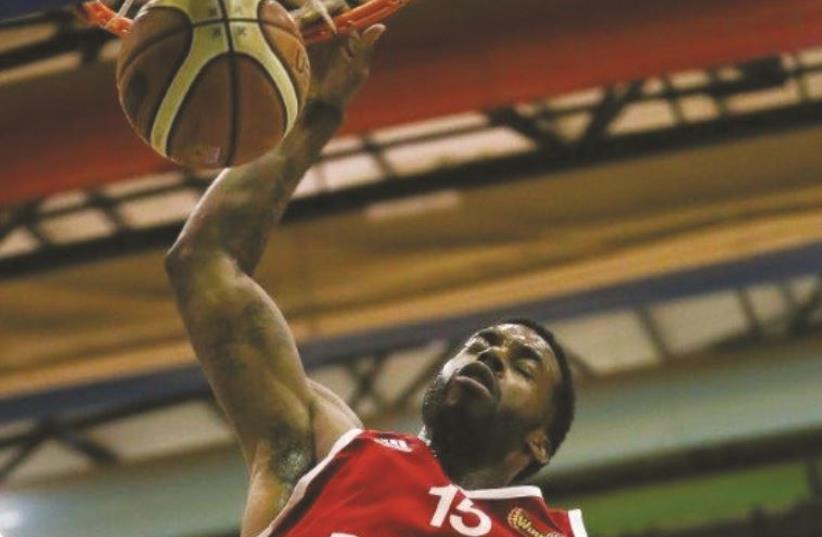 Hapoel Jerusalem's Donta Smith dunks during a game
(photo credit: ODED KARNI/BSL)
Advertisement
Hapoel Jerusalem advanced to the BSL final for the first time since 2007 on Thursday night, beating Maccabi Rishon Lezion 90-74 at the Jerusalem Arena to complete a 3-0 sweep.Jerusalem opened a double- digit gap in the first quarter and never looked back, improving to 6-0 in the post-season and registering its 21st win from the past 23 BSL games overall.Hapoel will have to wait 11 days for the start of the home-and-away final, with the first leg to be held at the lower seed on June 22. The return leg will be played at the higher seed three days later, with aggregate score over the two games to decide the champion.Maccabi Tel Aviv, the No. 1 seed in the playoffs, will be aiming to clinch its progress to a 21st straight final when it visits Hapoel Eilat on Sunday, holding a 2-1 lead.Hapoel’s last appearance in the final came in the 2006/07 season, with Dan Shamir at the helm and the likes of Meir Tapiro, Timmy Bowers and Terence Morris on the roster.In seven seasons since, Hapoel has always fallen short of the league final, with coaches Guy Goodes, Oded Katash, Sharon Drucker and Brad Greenberg all failing to meet expectations. However, Danny Franco has ended the drought in his first season in charge, with Jerusalem hitting top form at the perfect time.“I have no doubt we will be facing Maccabi in the final,” said Franco. “A 10-day break isn’t good, but we will make sure we are ready.”Dion Thompson had 15 points for Jerusalem, with Donta Smith and Bar Timor scoring 14 points each. Shawn Dowson ended his superb post-season for Rishon with 24 points in Game 3.It didn’t take Hapoel long to establish its dominance on Thursday, building a 14-point margin (29-15) by the end of the first quarter. The gap reached 20 points for the first time shortly before the halftime interval (55-33) and Jerusalem cruised to the finish line.