Hapoel Jerusalem cruises to 2-0 in BSL

Jerusalem has little trouble overcoming Kiryat Gat on the road ahead of Eurocup opener in Valencia. 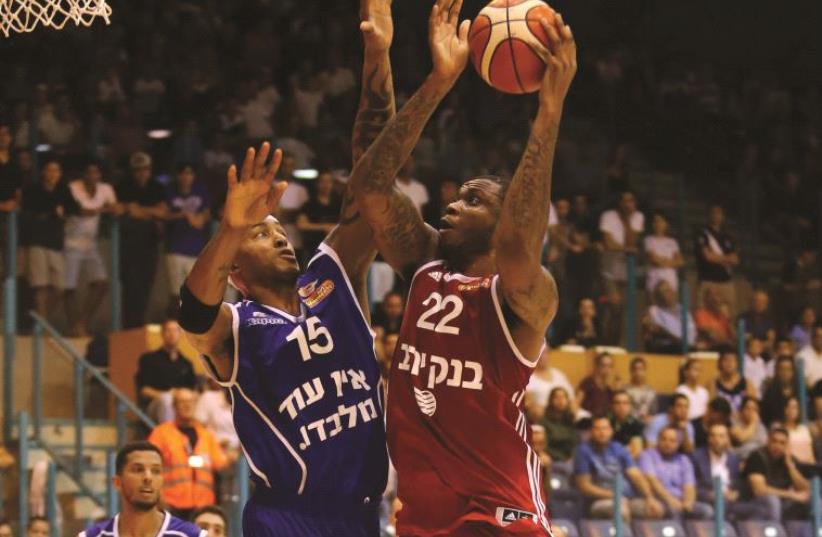 Hapoel Jerusalem forward Shawn Jones (right) scored 15 points in an Oct. 16, 2016 win over James Singelton (left) and Maccabi Kiryat Gat in BSL action
(photo credit: UDI ZITIAT)
Advertisement
Hapoel Jerusalem set a new club record by registering its 14th straight BSL regular season win on Saturday night, beating Maccabi Kiryat Gat 88-79 on the road despite the absence of both Amar’e Stoudemire and Lior Eliyahu.With a tough Eurocup regular season opener at Valencia to come on Wednesday, Jerusalem coach Simone Pianigiani chose to rest both the six-time NBA All- Star and arguably his best Israeli player. It proved to be a wise decision, with Hapoel easily overcoming Kiryat Gat to win a 14th consecutive regular season game stretching back to last season.Jerusalem struggled at the start, trailing by as many as nine points.The visitors only scored 13 points in the first quarter and trailed by six points following 10 minutes after failing to hit a single three-pointer. It would be a different story in the second period, with a 9-0 run giving Jerusalem its first lead of the night (22-21).Hapoel was in control at the break with a seven-point advantage (42-35) and its margin reached as many as 18 points before it took its foot off the gas.Jerome Dyson led Jerusalem with 21 points, with Bar Timor and Shawn James scoring 15 points each.Tyshawn Taylor had a game-high 28 points for Kiryat Gat, which fell to 0-2.Hapoel Holon also improved to 2-0 on Saturday, beating Ironi Nahariya 80-75 at Ein Sara Arena. A Khalif Wyatt three-pointer gave Holon the lead (59- 57) entering the final frame and the game wouldn’t be decided until the final minute.Nahariya missed a couple of chances to take the lead and Holon secured the victory from the free-throw line.Wyatt ended the game with 22 points and seven rebounds, with Paul Delaney scoring 20 points. Yancy Gates had 17 points and nine rebounds for Nahariya, which fell to 0-2 ahead of its FIBA Champions League group stage opener. Nahariya hosts Banvit Bandirma of Turkey on Tuesday.On Friday, Hapoel Tel Aviv opened its campaign with a 90-86 win over reigning champion Maccabi Rishon Lezion.Hapoel was playing for the first time this season after its game against Maccabi Haifa was postponed to October 19 as Haifa was in the US to play the NBA’s Sacramento Kings last week.Rishon had won its opener and took an early double-digit lead on Friday thanks to a 10-2 run (19-8). Rishon remained in front until the break, but took just a fourpoint cushion (39-35) into the second half, which was tight until the very end.Six straight points by Alando Tucker in the closing minutes gave Hapoel a slender advantage it maintained until the final buzzer to get its season off on the right foot.Tucker finished with a game-high 30 points, hitting 10-of-11 two-point attempts. Darrell Williams added 14 points and 10 rebounds.“I didn’t have a good feeling before the game because we had to deal with injuries throughout our preseason,” said Hapoel coach Sharon Avrahami. “It is very important for us to win our home games, making this contest especially significant.”Anthony Hilliard had 25 points for Rishon, which visits Kataja in Finland in its FIBA Champions League opener on Wednesday.“We had too many turnovers and were not good enough on offense,” said Rishon coach Arik Shivek. “We wanted to improve to 2-0 before our European opener, but playing in Europe requires you to move on quickly and we are already focused on our next game.”Maccabi Haifa opens its account when it visits Bnei Herzliya on Sunday, with the game being postponed by a day after Haifa’s flight from the US was delayed.Two more games will take place on Monday, with Maccabi Tel Aviv hosting Hapoel Eilat while Ashdod goes to Hapoel Gilboa/Galil.