Rampant Reds take first-leg in Eilat by 15 points to close in on first BSL championship. 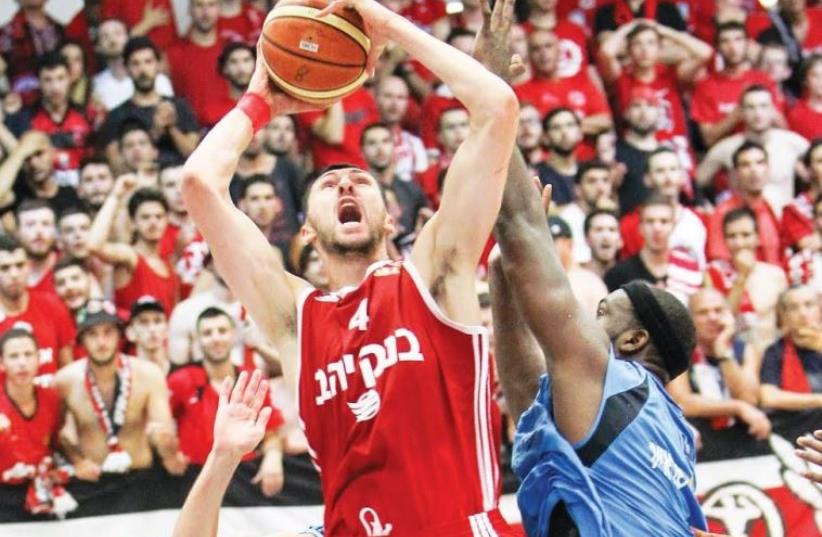 Hapoel Jerusalem’s Tony Gaffney
(photo credit: DANNY MARON)
Advertisement
Hapoel Jerusalem is on the verge of claiming a first and historic BSL championship after registering an 80-65 win at Hapoel Eilat on Monday night in the first leg of the two-game home-and-away final.Jerusalem hosts the return leg on Thursday and can afford to lose by as many as 14 points and still lift the championship shield.Jerusalem pulled ahead in the closing stages of the second quarter on Monday and remained in complete control until the final buzzer. After finishing as league runner-up six times in the past, Jerusalem is ideally placed to finally celebrate a championship in its first final since 2007, and in front of its own fans no less.Eilat came back from a 0-2 deficit to stun Maccabi Tel Aviv in the semifinals, but it looked drained on Monday and will need an almost superhuman effort to overhaul Hapoel in the second leg.Jerusalem has not only won 22 of its past 24 regular season and playoff games over the last five months, but it has played its best basketball in recent weeks and looks to be in unstoppable form.Bracey Wright led five Jerusalem players in double figures on Monday, scoring 18 points. Dion Thompson added 17 points and seven rebounds, with Tony Gaffney and Lior Eliyahu adding 13 and 12 points, respectively.“This was a great win for us,” said Wright. “We knew they play strong at home and we wanted to come out here and set the tone in the first leg and we did a great job and have put ourselves in a great position to win this final.“We still have to play the second leg with the same urgency and purpose as today and if we do that than I think we will be good.”Adrian Uter had 16 points for Eilat, which will also have to manage without the injured Kevin Palmer in Game 2 after he dislocated his shoulder on Monday.There was little to separate the teams throughout the first quarter, with Jerusalem holding a three-point gap (25-22) after 10 minutes.Eilat lost Palmer at the start of the second period, but it wasn’t until the closing stage of the first half that the visitors finally managed to establish a significant cushion.Jerusalem scored the final five points of the second frame to take an eight-point margin (44-36) into the break and Bar Timor’s basket to start the second half took the gap to double-digits for the first time. Another basket by Timor capped a 16-4 run which opened a 15-point lead (55-40) and Eilat was in serious trouble.The hosts managed to close within eight points (57-49), but Jerusalem reestablished a double-figure lead (64-52) by the end of the quarter and wouldn’t relinquish it.The visitors were in cruise control in the final 10 minutes and have already got one hand on the trophy entering Thursday’s second game in the capital.