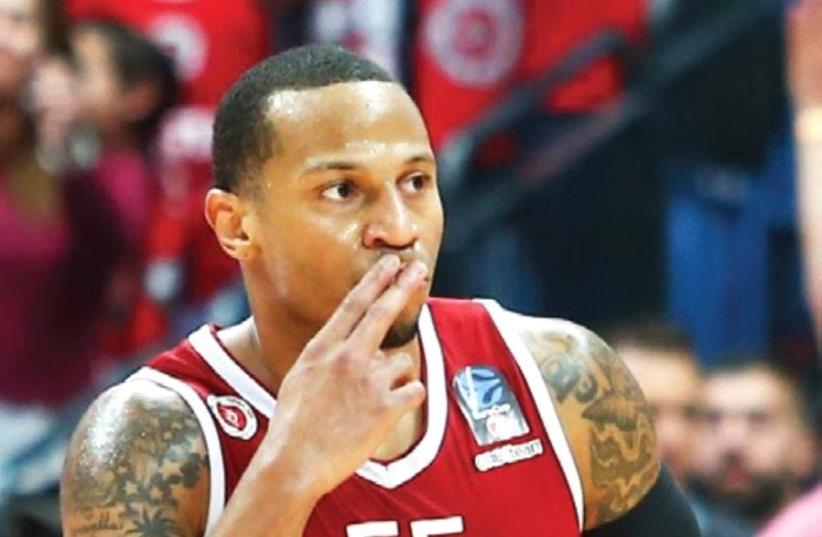 Hapoel Jerusalem guard Curtis Jerrells scored his team’s final seven points on Friday to help it to a 79-66 win over Valencia in Game 2 of the Eurocup semifinals.
(photo credit: DANNY MARON)
Advertisement
Hapoel Jerusalem players left their home arena on Friday afternoon with every intention of returning to it for at least one more Eurocup contest after forcing a decisive Game 3 in the semifinals at Valencia.A sensational fourth quarter saw Jerusalem claim an impressive 79-66 win in Game 2, tying the best-of-three series at 1-1.Game 3 will be played in Spain on Wednesday, with a Hapoel victory to send it through to its first continental final since winning the ULEB Cup in 2004. It will also ensure the team will host at least one more Eurocup game at the Jerusalem Arena this season, with the final to also be played in a best-of-three format.Malaga is awaiting the winner in the final after completing a 2-0 sweep of Lokomotiv Kuban Krasnodar with a 74-63 win on Friday. Hapoel will have homecourt advantage in the final should it advance.Jerusalem knew the obvious importance of Friday’s game and got off to an ideal start, scoring the first nine points.Bar Timor’s basket gave it a double- digit lead (15-5) for the first time, a gap the hosts still held at the end of the first quarter (24- 14). But Valencia maintained its cool, consistently eating away at the gap in the second period and trailing by only four points (41-37) at the break.The visitors completed their comeback in the third frame to take their first lead of the afternoon and entered the final quarter with a four-point cushion (57-53) and momentum on their side. But that all changed at the start of the fourth period, with Jerusalem catching fire from three-point range to steamroll the Spaniards.Four consecutive triples, two each by Curtis Jerrells and Yotam Halperin, moved Hapoel back in front and the hosts never looked back. Jerusalem held Valencia to just three points in the final 6:50 minutes, with seven straight points by Tarence Kinsey followed by seven points from Jerrells leading Hapoel to a game-clinching 14-3 run to end the encounter.Kinsey led Hapoel with 18 points, with Jerrells adding 17 points. Yotam Halperin added 11 points off the bench, with Amar’e Stoudemire picking up nine points and eight rebounds.Rafa Martinez had 22 points for Valencia, which was held to 4-of-24 from three-point range.“We started the game great and we ended it great and in the middle we resisted them with pride and great mentality,” said Jerusalem coach Simone Pianigiani.“We know it will be difficult there but we are going there to try and win the game. For us it is something special to be here.We are under no pressure and we can enjoy the game. The pressure is on Valencia because they are playing at home. If we win at Valencia for sure we can beat anybody.”