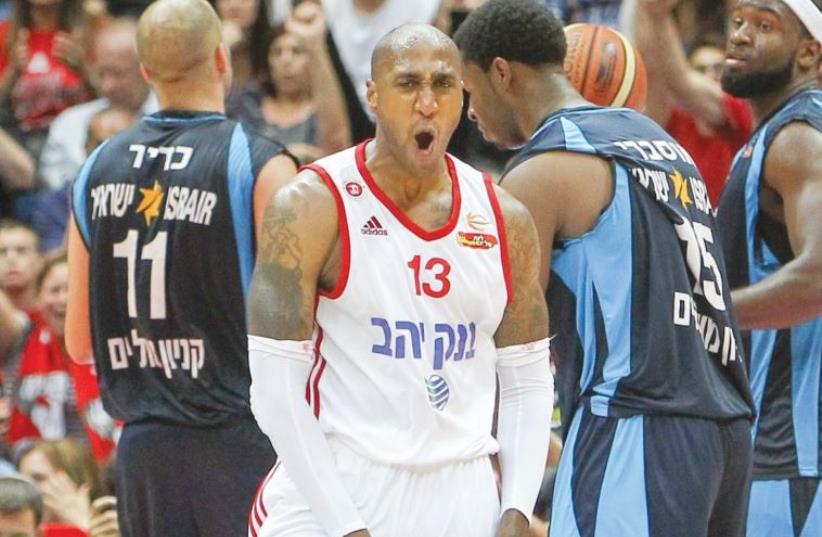 Bracey Wright, who scored 20 points to lead Hapoel Jerusalem to an 88-68 win over Hapoel Eilat and a first championship in club history
(photo credit: DANNY MARON)
Advertisement
The wait is finally over.Hapoel Jerusalem Basketball Club was crowned as the champion of Israel for the first time in its history on Thursday night, beating Hapoel Eilat 88-68 in Game 2 of the BSL final at the Jerusalem Arena to clinch the historic title.Jerusalem could have lost by as many as 14 points and still lifted the championship shield after defeating Eilat 80-65 in Game 1 of the home-and-away aggregate final on Monday.However, it would secure the league title in style on Thursday, overcoming a nervy first half to beat Eilat in front of a sold-out and raucous arena.Jerusalem experienced more than its fair share of crushing near-misses and Thursday’s triumph ended years of heartache.Hapoel had finished as league runner-up six times in the past, being beaten by perennial champion Maccabi Tel Aviv each and every time. In its previous final appearance eight years ago, Hapoel led throughout the Final Four final against the yellow-andblue, only for a Jamie Arnold basket from an offensive rebound with two seconds remaining giving Maccabi its first lead of the game and securing its 14th consecutive championship.Maccabi failed to reach the final this season - something which hadn’t happened since 1993 - after Eilat came back from a 0-2 deficit in the best-of-five semifinal series.The southerners looked drained in Game 1 of the final, but fought valiantly on Thursday, only to ultimately succumb to the better team, the best team in Israel this season.Donta Smith and Bracey Wright had 20 points each for Jerusalem, with Lior Eliyahu adding 10 points. Adrian Uter led Eilat with 17 points and 11 rebounds.Jerusalem became just the sixth club to win the Israeli championship, joining Maccabi Tel Aviv, Hapoel Tel Aviv, Hapoel Galil Elyon, Hapoel Holon and Maccabi Haifa.Despite the 15-point hole and the absence of American Kevin Palmer, who dislocated his shoulder in Game 1, Eilat looked like a team that really believed in its chances, scoring the first six points of the night to quickly boost its hopes.After being named as the BSL MVP ahead of the game, Eliyahu finally netted Jerusalem’s first points of the game, but Eilat continued to control proceedings.The hosts struggled to settle down and the southerners led by as many as eight points (23-15) in the first quarter, taking a sixpoint gap (26-20) into the second period.Eilat remained in front throughout the second period as well, with Elishay Kadir’s basket opening an eight-point cushion (44-36) at the break.Afik Nissim’s three to begin the second half took Eilat’s lead to a record 11 points, a mere five from the required margin for an aggregate victory.However, the third quarter would belong to Jerusalem and the final was as good as over by the end of it. A 20-2 run completely turned the encounter on its head, with the hosts finally tightening their defense and Smith, Wright and Eliyahu leading the way on offense. Eilat scored just seven points in the final nine minutes of the quarter while Jerusalem’s big three combined for 22 points in the period.Hapoel ultimately outscored Eilat 27-10 in the third frame to take a nine-point gap (63-54) into the final 10 minutes, allowing the long-suffering fans to begin their celebrations in earnest well before the final buzzer.