It made the most of a listless Maccabi display on Sunday to defeat the yellow-and-blue on the road. 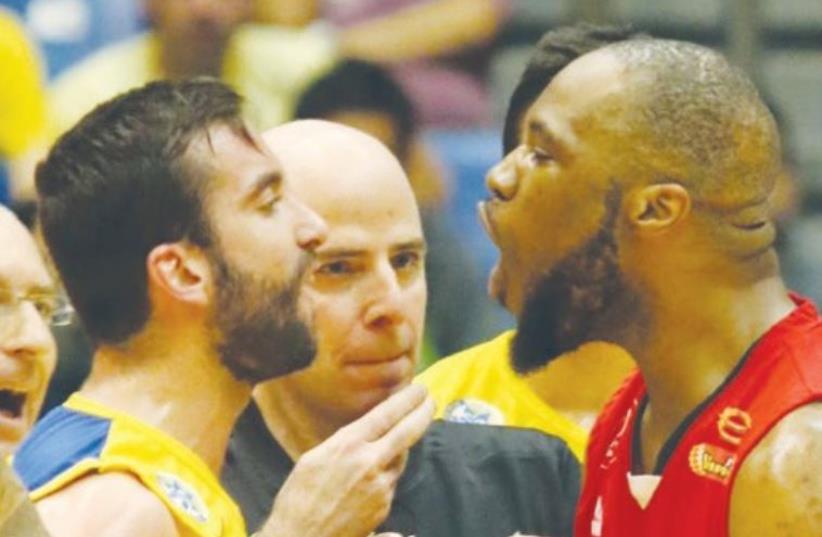 Hapoel Tel Aviv forward John Williamson (right) and Maccabi Tel Aviv guard Yogev Ohayon clash during last night’s derby at Yad Eliyahu, won by the reds.
(photo credit: ADI AVISHAI)
Advertisement
Hapoel Tel Aviv busted out of its recent slump in sweet fashion on Sunday night, beating arch-rival Maccabi Tel Aviv 84-68 at Yad Eliyahu Arena.Hapoel entered the contest just one game above the bottom of the BSL standings after losing three of its previous four games.However, it made the most of a listless Maccabi display on Sunday to defeat the yellow-and-blue on the road and improve to 9-13.Raviv Limonad led six Hapoel players in double figures with 16 points and seven assists, with Gal Mekel scoring 14 for Maccabi.Hapoel took an 11-point lead (40-29) into the break after outscoring the hosts 21-10 in the second quarter. Maccabi never really came close to overhauling the reds in the second half, falling to 15-7 after seeing its fourgame winning streak snapped in painful manner.Elsewhere, Hapoel Holon boosted its BSL survival hopes with a third straight victory on Sunday, beating fellow struggler Maccabi Kiryat Gat 86-84. The tight contest came down to the closing seconds, with Kiryat Gat seemingly in control with the scor tied at 84-84 with 24 seconds remaining and the ball in its hands. However, veteran guard Meir Tapiro lost the ball to Holon’s Shlomi Harush and Guni Izraeli scored the go-ahead basket with 4.4 seconds to play to help the hosts improve to 8-14.Will Clyburn had 28 points and eight rebounds for Holon, with Ramel Bradley adding 25 points, including seven three-pointers from 10 attempts.Paul Delaney finished with 25 points and eight boards for Kiryat Gat, which dropped to 7-15.On Monday, Hapoel Jerusalem (15-6) aims to get back on track when it hosts Bnei Herzliya (12- 9). Jerusalem was outplayed by Kiryat Gat last week, losing for the seventh time in its past nine games over all competitions.Hapoel signed Eli Holman last week in an attempt to bolster its presence under the baskets, bringing in a player who was also rumored to have been negotiating with Maccabi Tel Aviv. Holman will arrive in Israel on Wednesday and make his debut next week. Holman played for Hapoel Eilat in 2012/13 and joins Jerusalem after being knocked out in the Chinese league quarterfinal playoffs with the Zhejiang Lions. He averaged 22.9 points and 14.4 rebounds for Zhejiang.Also Monday, Hapoel Eilat (9-12) visits Ironi Ness Ziona (7-14).