How geopolitics keeps Israel out of the World Cup

Israel has failed to reach soccer’s quadrennial competitive mountaintop since 1970. 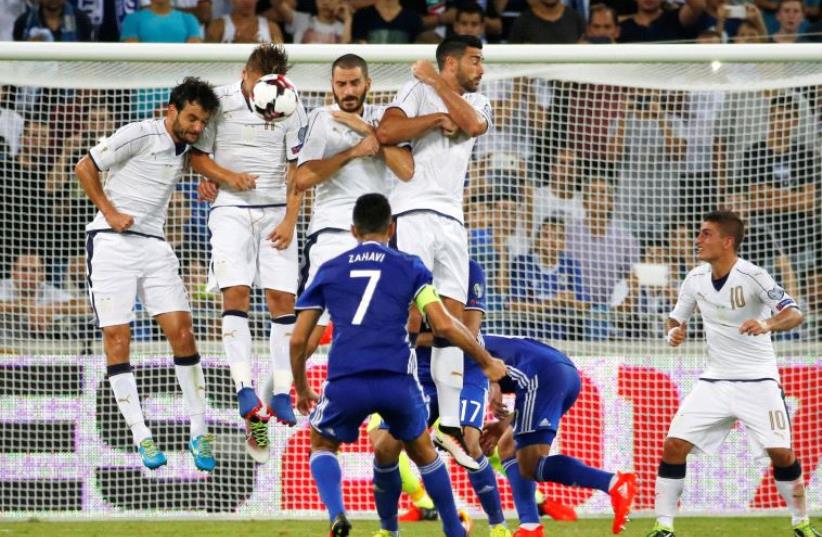 Israel v Italy - World Cup 2018 Qualifier - Sammy Ofer Stadium, Haifa, Israel
(photo credit: REUTERS)
Advertisement
NEW YORK — On Thursday, Saudi Arabia and Russia opened the 2018 FIFA World Cup tournament before 81,000 fans at Moscow’s Luzhniki Stadium amid concerns over the host’s human rights record.While Saudi Arabia and Iran will serve as this year’s Middle Eastern hopefuls, Israel has failed to reach soccer’s quadrennial competitive mountaintop since 1970, in Mexico.It’s not wholly for want of talent or trying, but perhaps because of a political and geographic decision that keeps Israel from playing its closest neighbors.In 2018 World Cup qualifying, Israel competed in the Union of European Football Association’s Group G along with 2012 champion Spain and 2006 champion Italy, as well as Albania, Macedonia and Liechtenstein. Israel’s bordering neighbors — with the exception of Egypt, an African state that is part of the Confederation of African Football — played in the Asian Football Confederation, or AFC.That makes for tough sledding for the Israelis, who are forced to face perennial powerhouses like Spain and Italy. (Even still, Israel managed to put up strong performances, losing 1-0 to both of those formidable squads.)The Israeli Football Association once competed in the Asian confederation, initially joining in 1954. But many AFC members soon initiated a sporting boycott of Israel. The boycott reached a fever pitch in 1958: Israel, in qualifying for the year’s World Cup, won its group in the African and Asian zone without facing a single opponent, due to politically motivated withdrawals by Turkey, Indonesia and Sudan.Although Israel continued to compete within the AFC, hosting and winning its 1964 Cup, rivals from mostly Muslim countries — including Afghanistan, Indonesia and Iran — pulled out of the competition, generating an unprecedented, unnecessarily Lilliputian bracket featuring Israel, India, South Korea and Hong Kong.In 1974, amid growing pan-Arab nationalism and solidarity with the Palestinian people, the AFC expelled Israel from the confederation in a 17-13 vote organized and led by Kuwait. That forced the Jewish state into 20 years of wandering in the soccer desert. Israel eventually secured full membership in UEFA, the European bloc, in 1994. Israel remains the only state in UEFA not to maintain any territory on the European continent.Israel says it found an amiable, if not always easy, refuge in Europe.“We prefer our clubs and national teams playing at the European level,” Shlomi Barzel, a spokesman for the Israeli Football Association, told JTA. “We find a warm, welcoming and challenging home in Europe.”Still, European soccer culture can be antagonistic toward Jews, ostensibly “Jewish” teams and visiting Israelis. When Hapoel Tel Aviv played the Siroki Brej club in Bosnia in 2007, Brej fans shouted “Sieg Heil” and made Nazi salutes. During a 2013 Budapest-hosted friendly between the Hungarian and Israeli national teams, fans of the former greeted the latter with chants of “stinking Jews” and “Heil Benito Mussolini.”Despite growing European anti-Semitism, Israel still appears to see its players as goodwill ambassadors of the country’s values. (For example, the team captain, Bibras Nathko, is a Muslim Circassian.) If playing in Europe hurts its World Cup chances, it also gives Israel validation as a Western, tolerant and democratic country.The Israeli Ministry of Foreign Affairs, on its official cultural page dedicated to sports, prominently advertises that “Israel’s athletes such as … soccer player Yossi Benayoun (who played for England’s renowned Chelsea FC), regularly make an impact and a name for themselves,” adding that “Israeli soccer players are having an increasing impact on the world stage, with 20 Israeli soccer players currently playing in top European clubs.”Anti-Israel bias has “absolutely no effect” on the team’s ability to compete internationally, Barzel told JTA, speaking on behalf of the association.“We enjoy good hospitality wherever we visit and [we are] happy to host all visitors,” he said. “We are sure that the feeling is mutual.”Except, of course, in Iran, Saudi Arabia, Tunisia and Lebanon, among other AFC and Confederation of African Football members, who refuse to allow their respective athletes to compete against Israelis.The Israeli Association, however, refuses to either entertain or pontificate upon the merits of a potential return to the Asian conference, although the confederation is comprised of states that on the soccer pitch are demonstrably inferior to those in Europe.Asked if Israel would have a better chance in World Cup qualifying if competing in Asia, Barzel provided a defiant and frank rejoinder: “No.”Asked if Israel would be willing to return to the AFC by invitation, Barzel responded similarly.“No,” he said. “We are staying in Europe.”