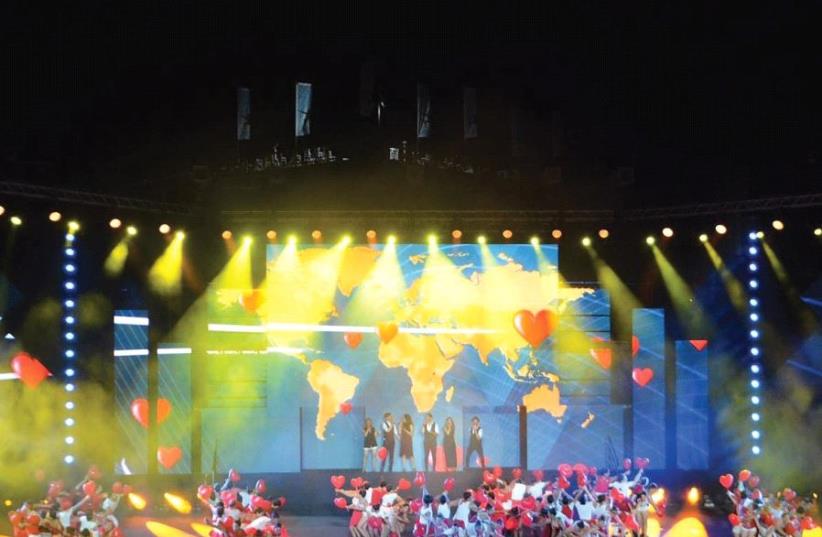 The 20th Maccabiah came to an end last night with a spectacular closing ceremony in Latrun.
(photo credit: KAYLA STEINBERG)
Advertisement
Filled with record-breaking performances, team spirit, and international Jewish unity, the 20th Maccabiah Games came to a satisfying end at the closing ceremony in Latrun on Monday night, entitled “Higher. Better. Together.”Maccabiah 2017 began on July 4, with games preceding the opening ceremony on July 6.While the Maccabiah participants enjoyed excelling in their respective sports, many agreed that the convivial environment and new friendships were the best part of their time in Israel. “The atmosphere was the most exciting thing for me,” said Felipe Zyman, who represented Brazil in judo. 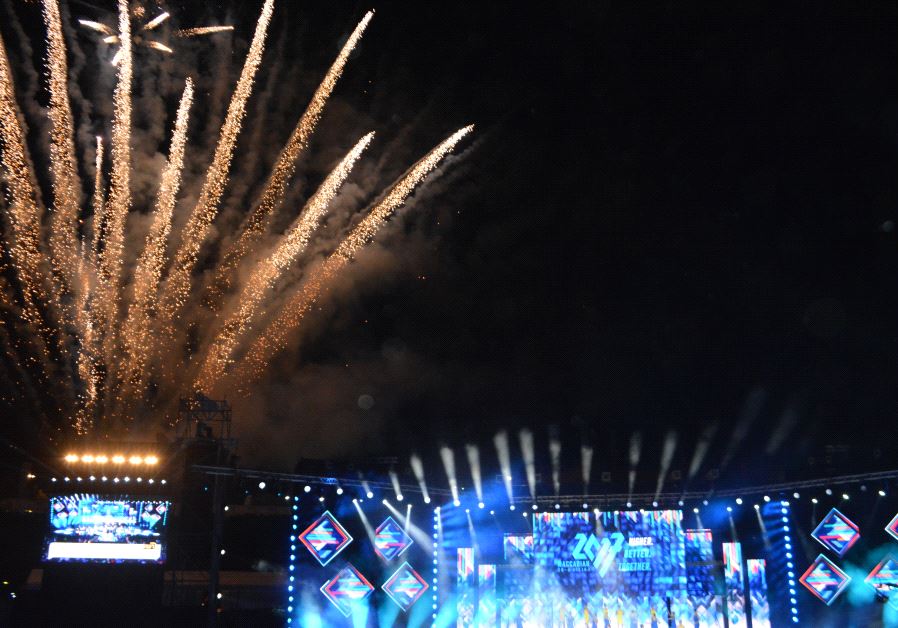 Peter Berry of the USA , who won a bronze medal in wheelchair basketball, expressed his excitement for the closing ceremony before it commenced. “I’m just here to have a good time and meet new people,” he said.Pre-ceremony, the athletes traded country apparel, collecting paraphernalia from as many teams as possible in commemoration of the international friendships they’ve made along their Maccabiah journeys.
The opening ceremony of the 2017 Maccabiah Games (Reuters)
They also enjoyed a variety of complimentary Kosher food prior to the event, from hummus and pita to Asian noodles.Maren Angus, who won a gold medal as a player on the USA softball team, said the most special part of the Maccabiah Games has not been her success in the competition, but rather meeting so many fellow Jews. “I come from a really small town in Tennessee, so I don’t think I’ve ever been in a place with this many Jewish people in my life,” she admitted.The ceremony began with the audience on its feet, as a group of young Israeli dancers came onstage to teach everyone a spirited routine to the Maccabiah theme song.International supermodel Bar Refaeli was then welcomed to the stage as the celebrity MC for the evening. She expressed her pride in the Maccabiah Games and its representation of the Jewish people.After a speech by Natan Sheransky, Chairman of the Executive of the Jewish Agency, who passionately told the audience, “We all will build our home together,” the crowd began to chant “Am Yisrael Chai!” Hope for a strong Jewish homeland couldn’t have been more evident than when the crowd rose once again for the singing of Hatikvah.“This is a wild celebration for the soul,” said Refaeli of the closing ceremony. The participants, hailing from 80 different countries, will leave on their flights back home tonight “bursting with adrenaline, but with a bit of Israel in [their] hearts.”Israeli artists performed energetic renditions of international pop hits such as Ed Sheeran’s “Shape of You” and Mark Ronson and Bruno Mars’s “Uptown Funk,” complete with background dancers, a light show and fireworks.“The Maccabiah is reaching higher and higher,” said President Reuven Rivlin in a video statement. His words matched the theme of the closing ceremony show. 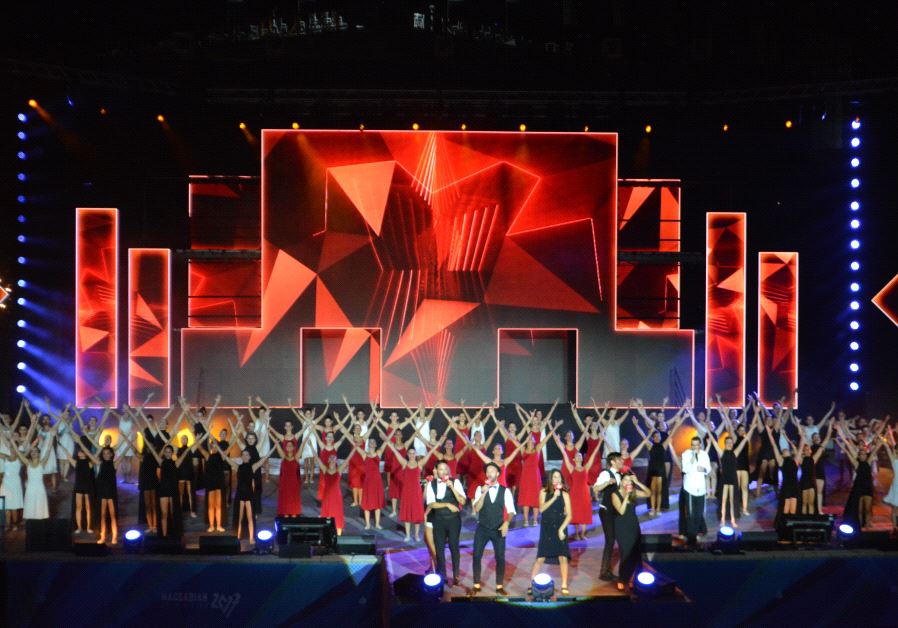 Later in the evening, a video about former IDF soldier Ahiya, who was blinded in combat, played for the audience. Detailing his courage in battle and strength in rehabilitation, the video showed him getting back into the swimming pool and rock climbing. In this year’s Maccabiah Games, Ahiya won two gold medals as part of the Israeli Paralympic rowing team.Ahiya then took the stage to a standing ovation along with his seeing eye dog. “I can’t see you, but I can feel our strength as the Jewish people, and when we are together, no one can ever stop us.”After an impressive beatboxing performance by Josh of Orthobox, made famous by America’s Got Talent, a large cast broke out into song and dance to a vibrant, modern medley of popular Jewish songs such as “Oseh Shalom.”“Take with you the excitement, the love, and especially the togetherness,” said Refaeli, encouraging the Maccabiah athletes to keep the Games and their time in the Holy Land with them always.“Israel will be in your hearts and you will be in ours,” said Rivlin in a second video statement. To finish the ceremony with a bang, a spectacular fireworks display followed his words, sending the athletes of the 20th Maccabiah Games home in style. 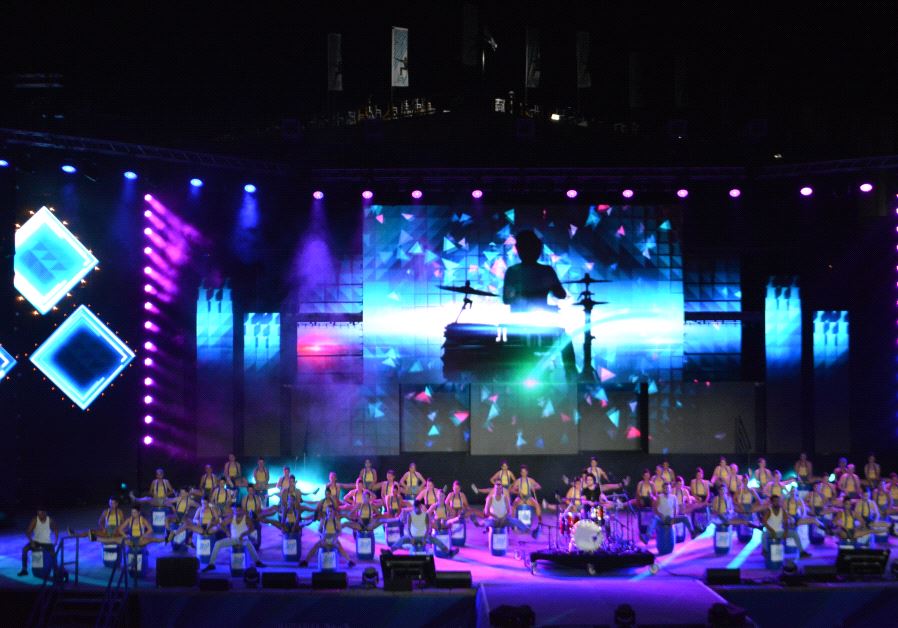