“What they are doing is very nice, they are representing Israel, but it’s not pure Israel.” 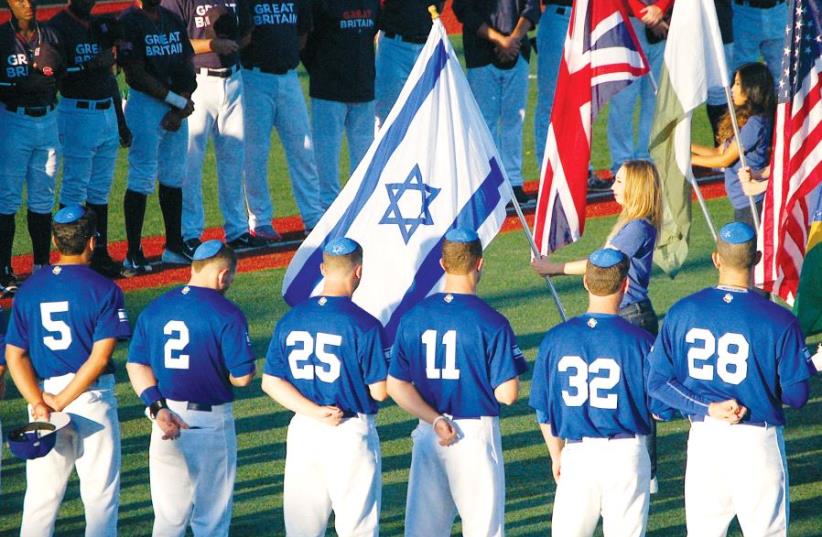 Team Israel stands to the sounds of ‘Hatikva’ before the WBC Qualifier Championship in September
(photo credit: JOSH SOLOMON)
Advertisement
As Team Israel continued a roller- coaster ride through the World Baseball Classic this week, defeating baseball powerhouse Cuba on Sunday and losing to the Netherlands on Monday, Israelis in the streets of Tel Aviv eyed the team of mostly Jewish Americans with a mix of admiration, apathy and curiosity.While many American Jews are reveling in the team’s underdog run in the World Baseball Classic, some Israelis have not even heard of the team. On Monday, banners for Israeli and international soccer teams were strewn across some stores in Tel Aviv’s Carmel Market, yet, the only thing that could resemble baseball culture were the hot dogs being hawked next to falafels and schnitzels.“What they are doing is very nice, they are representing Israel, but it’s not pure Israel,” said Avi Shabi, 53, a shoe salesman in Tel Aviv’s Carmel Market.
Israel faces first defeat at World Baseball Classic in Tokyo, Japan on March 13, 2017 (credit: REUTERS)
Only two of the team’s 29 players hold Israeli passports but WBC rules state that a player just needs to be eligible for citizenship in a country.Under Israeli law, all Jews may receive automatic citizenship. Until a trip in January, most players had not been to Israel, a country that has an affinity for soccer, though some 1,000 Israelis play in baseball leagues from Little League to adult competition.“Jewish yes, Israeli no,” said Yitzhak, 54, who was buying a pair of sneakers in the market.Other Israelis like Eli Elhalal are fans of team and are keeping up with the team. “I think it’s amazing, to see the team standing there with kippot and wearing the Star of David,” said Elhalal, 40, who was working in a pet store at the market.“It makes me really happy.”Elhalal has not watched the games, but has been following the team’s victories in the news. “4-1 over Cuba!” he exclaimed. Elhalal’s coworker was surprised to hear that American Jews are representing Israel in baseball. “Wow, really?” he responded.Three other Israelis declined to speak with The Jerusalem Post because they had not heard about the baseball epic. “Soccer and basketball, that’s it, no baseball,” said one man, who declined to give his name.Speaking to the Post on Sunday, Eli Groner, a former baseball player turned director-general of the Prime Minister’s Office, responded to criticism that team Israel is more American than Israeli. “For those who think that the State of Israel only exists for Israelis, this is no big deal,” he said. “For those who understand that Israel is the homeland for all the Jews worldwide, this is one of the greatest athletic sources of pride in our nation’s history.”Nevertheless baseball in Israel has arguably reached an unprecedented level of prominence with Team Israel’s latest victory. “Israel is an amazing country. It’s full of immigrants just like the United States,” Team Israel pitcher Josh Zied told Channel 2 on Sunday. “We feel like we’ve become more Israeli.”

Allon Sinai and Reuters contributed to this report.
Advertisement
Subscribe for our daily newsletter