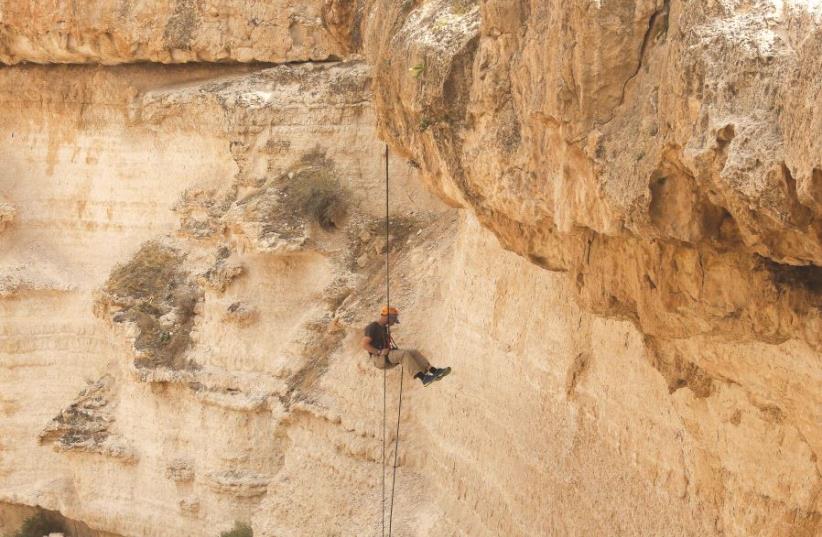 A person rappelling
(photo credit: MARC ISRAEL SELLEM/THE JERUSALEM POST)
Advertisement
There is nothing quite like riding on the outside of a jeep, standing on the footboard holding onto the inside hanger bars of the vehicle speeding through the desert at speeds approaching 80 kilometers an hour.“Sand surfing” may not be an Olympic sport (yet), but it is exhilarating beyond belief and is just one of many extreme outdoor activites available to Israeli adventurers and visitors to the Holy Land, and it is, as they say, just a phone call or email away.Itamar Dardik runs a company called Ashdot, based out of the Judean Desert and the Dead Sea region, that specializes in private, tailor-made, extreme-sports expeditions for individuals, families and groups who are interested in experiencing Israel in an off-the-beaten-track manner.“I started this venture in 1992, primarily based on my passion for Israel and the outdoors,” said Dardik. “I have always tried to show people a side of the country that they would not get to see when they go on ‘typical’ tours that may be the most popular.”Ashdot, and what Dardik estimates are upwards of 50 such similar “colleagues and competitors,” focus on small groups that are interested in an athletic challenge and a spectacular tour all in one.Using rappelling equipment, climbing ropes, off-road jeeps and more than 30 years of professional experience leading to a back-of-the-hand knowledge of every nook and cranny of the vast desert and mountain ranges, Dardik bases the specific trail on the strengths and desires of his clients.He has packages that begin as low as NIS 1,000 for an afternoon jeeping tour for up to seven people, and range to a comprehensive full-day excursion – including pick-up, rappelling, jeeping and climbing – that can range upwards of NIS 3,400 for the group.On a recent afternoon – on what Dardik called a “leisurely jaunt” – we began at the northern edge of the Dead Sea in Nahal Og with a short hike through very narrow canyons that led to a pair of sheer inclines that had built-in ladders drilled into the mountain top.The climbs were quite steep but definitely worthwhile for the gorgeous vistas overlooking the vastness of the desert backdropped by the Dead Sea.Heading by jeep (both on the outside and inside of the vehicle) to Qumran, we ended up at Metzukei Dragot, which is a mountain range just above the Dead Sea that has hundreds of climbing and biking trails, as well as drops of between 20 and 100 meters that are ideal for rappelling.There were a number of small groups, which had clearly camped out in the area, as well as a number of memorials for people who had died while climbing in the area (mostly when major storms hit unexpectedly).“This area is very safe, but only for someone who knows it well,” noted Dardik as he expertly maneuvered the jeep through the treacherous mountain terrain. “I have had one bad experience in my life, where I was stranded in a flood and didn’t think I would make it, but that is out of probably 10,000 times I have done this. Also, that tiny element of risk is part of what makes this so fun.”So with that sly sense of adventure, but with a healthy measure of safety in mind, Dardik demonstrated his climbing and rappelling skills, scaling a 60-meter incline, strapping up and dropping to the bottom in about 25 seconds flat.“All in a good day’s work,” he laughed. “I think I love what I do about as much as anyone could.”It isn’t hard to understand why.For more information, or to book an extreme-sport adventure with Ashdod, please visit www.ashdot.info or call Itamar at 052-230-0306