Israel demands ceremony at each Olympics for athletes murdered in 1972 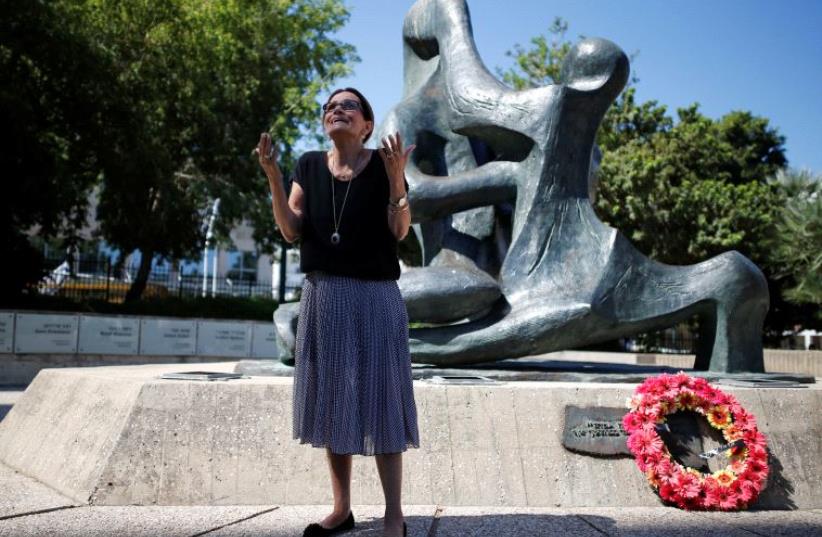 Ilana Romano, widow of Israeli athlete Yossef Romano, one of 11 Israeli team members who were killed by Palestinian gunmen during the 1972 Summer Olympics in Munich, speaks in Tel Aviv, Israel July 13, 2016
(photo credit: REUTERS)
Advertisement
RIO DE JANEIRO - Israel on Sunday demanded a commemoration for its athletes killed at the 1972 Olympics at each Games opening ceremony, telling the International Olympic Committee "a black flag" will always fly over its multi-sports event.Days after the IOC announced a mourning site at each Olympic village with a minute's silence in the memory of those killed by Palestinian gunmen, Sports and Culture Minister Miri Regev urged the IOC to mark their deaths at the next Olympics' opening ceremony."Our good friend (IOC President) Thomas Bach was the first to understand the obligation of the IOC to mark this tragedy," Regev said in a ceremony at the Rio de Janeiro city palace, attended by Bach among other guests. Regev was referring to the August 3 ceremony at the athletes' village in Rio. Two of the widows of those killed in Munich were present and said the remembrance had brought closure.Bach, a German, had inaugurated the Place of Mourning, which will now be a feature at every Olympics, with two stones from ancient Olympia encased in glass in a leafy part of the athletes' village.He then read out the 11 names of the Israeli victims, the German policeman, who was killed on the same day, as well as the name of Nodar Kumaritashvili, an athlete killed on the eve of the Vancouver 2010 Olympics in an accident in the sliding center."However, this ceremony is not enough," Regev said. "The grief for the Munich athletes does not belong only to the families, only to Israel, only to the Jewish people," she said. "It is a tragedy also for the IOC which will have a black flag flying.""This must become an integral part of the Olympic Games opening ceremony to remind the free world what can happen when we let our guard down.""Let us hope that you, our friend Thomas Bach, will put this right in the next Olympiad in Tokyo."On September 5, 1972, members of the Israeli Olympic team were taken hostage at the poorly secured athletes' village by Palestinian gunmen from the Black September group.Within 24 hours, 11 Israelis, five Palestinians and a German policeman were dead after a standoff and subsequent rescue effort erupted into gunfire.Relatives of those killed have long demanded a minute's silence at the opening ceremony, only to be turned down by the IOC.