Israel has no real chance of ending the group in front of global powerhouses Spain and Italy. 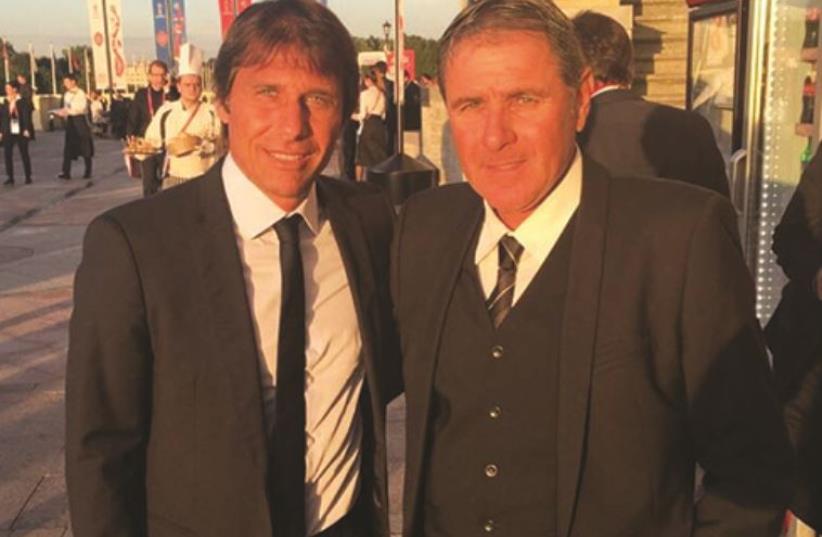 Israel national team coach Eli Gutman (right) met Italy coach Antonio Conte at Konstantin Palace outside of St. Petersburg yesterday
(photo credit: ISRAEL FOOTBALL ASSOCIATION, COURTESY)
Advertisement
The start of 2018 World Cup qualifying is still over a year away, but Israel’s hopes of reaching the tournament for the first time in 48 years were already all but dashed on Saturday after the blue-and-white was paired with former champions Spain and Italy.The 52 European teams were divided into nine groups (seven groups of six teams and two groups of five teams) at Konstantin Palace outside of St. Petersburg, with only the winners of each group to qualify automatically. The eight best runners-up will advance to home-and-away playoffs, with the four winners to progress to Russia.Israel will be optimistic of finishing ahead of Albania, Macedonia and Liechtenstein, who were also placed in Group G, but has no real chance of ending the group in front of global powerhouses Spain and Italy.Spain was crowned world champion in 2010, while Italy won the last of its four titles in 2006.The qualifiers will begin in September 2016 and run until November 2017.“This is possibly the toughest draw Israeli soccer has received since joining UEFA over 20 years ago,” said national team coach Eli Gutman.“Spain and Italy, former world and European champions, represent the best of world soccer. This is a massive challenge for every coach and every player. It would be wrong to focus on this at the moment as we are resuming our Euro 2016 qualifying campaign in just over a month. We have a real chance of reaching a major tournament and who knows when that might happen next, especially considering the draw for 2018 World Cup qualifying.”Israel currently sits in fourth place in Group B of Euro 2016 qualification with nine points from six matches following three consecutive defeats. Israel hosts Andorra on September 3 before visiting Wales three days later.Elsewhere, things do not look so straightforward in Group A of 2018 World Cup qualification where the Netherlands and France face tricky opponents in Sweden, Bulgaria, Belarus and Luxembourg, Germany, which won the World Cup for the fourth time in Brazil last year, will face the Czechs, Northern Ireland, Norway, Azerbaijan and San Marino.“I’m happy that we are not playing against Italy and France,” Germany manager Oliver Bierhoff told reporters. “We can be satisfied about that.”England again looks well placed to reach the World Cup after being grouped with its oldest rival Scotland in Group F, along with Slovakia, Slovenia, Lithuania and Malta.Reuters contributed to this report.