The Palestinian Football Association’s proposal for the suspension of Israel to be on the agenda in FIFA’s annual Congress in Zurich on May 29. 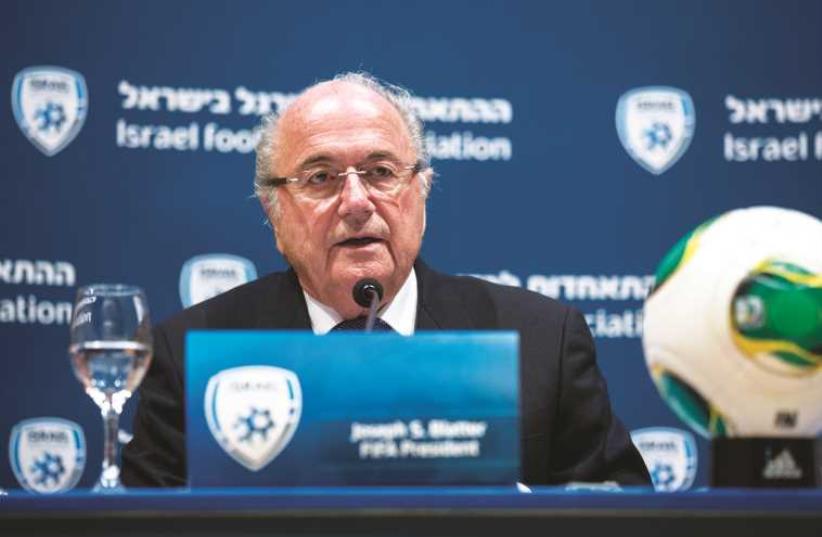 FIFA President Sepp Blatter
(photo credit: REUTERS)
Advertisement
Israel should not be suspended from world soccer’s governing body as long as it is “fulfilling its statutory duties” said FIFA President Sepp Blatter, following a meeting with Israel Football Association chairman Ofer Eini and CEO Rotem Kemer in Zurich, Switzerland on Wednesday.The Palestinian Football Association’s proposal for the suspension of Israel will be on the agenda in FIFA’s annual Congress in Zurich on May 29. The Palestinians claim that Israel has continued to hamper their soccer activities, imposing restrictions on the movement of their athletes between the Gaza Strip and the West Bank.The PFA has also cited curbs Israel places on the import into Palestinian territories of sports equipment and on visits by foreign teams and individuals.Eini and Kemer met with Blatter and FIFA Secretary-General Jerome Valcke following earlier talks between FIFA and the Palestinian Football Association.According to a FIFA statement: “President Blatter reiterated his position that any member association that is fulfilling its statutory duties should not be suspended.This would also apply to the IFA as long as they fulfill such duties.”A meeting between Eini and PFA President Jibril Rajoub is scheduled to take place in Zurich over the next few days.Two years ago, FIFA established a task force which included Blatter, the Israeli and Palestinian soccer chiefs and the heads of the European and Asian soccer confederations to examine the Palestinian complaints and to try and resolve them.However, in recent days Rajoub reiterated his claim that Israel was “persecuting Palestinian footballers, athletes and the movement of sporting equipment.”Rajoub agreed to drop a similar resolution at last year’s Congress in Sao Paulo but he said he would not back down this time.A three-quarter majority of FIFA’s 209 members is required for the Palestinian proposal to pass.Elsewhere on Wednesday, the Premier League match between Maccabi Netanya and Hapoel Acre was postponed from Saturday to Monday due to the players strike at the former. Netanya players have boycotted training all week after not being paid their salaries in the past two months.The league’s directorship held an emergency meeting on the matter on Wednesday and decided to reschedule the match after Netanya CEO Roei Daniel said he hopes to raise the money required to pay the salaries over the coming days with the sale of Nigerian forward Olarenwaju Kayode. The league said that should Netanya players not return to training and refuse to play their next match it would ask the IFA prosecutor to punish the club and relegate it to the National League.