Israel off to dream start with WBC triumph 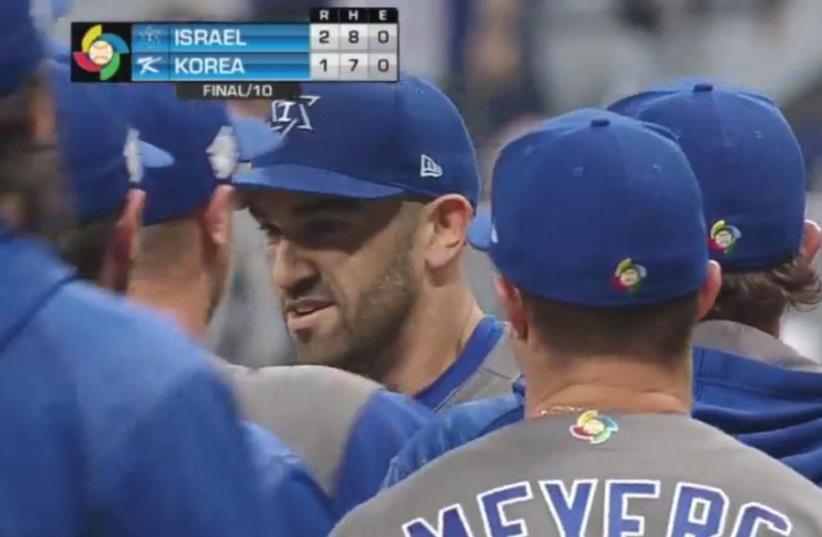 Israel PITCHER Josh Zeid (center) is congratulated by his teammates after he pitched three scoreless innings out of the bullpen yesterday to earn the win in the blue-and-white’s 2-1, 10-inning victory over host South Korea to begin play at the World Baseball Classic in Seoul.
(photo credit: Courtesy)
Advertisement
After stunning host South Korea in its World Baseball Classic opener, Israel’s national team can already take a significant step towards securing its place in the last eight of the tournament when it faces Chinese Taipei in Seoul on Tuesday morning.The blue-and-white got its campaign off to a dream start on Monday, claiming a 2-1 win in 10 innings against South Korea, which is ranked No. 3 in the world and is a two-time medalist at the WBC.Chinese Taipei, which will be playing its first game of the tournament, is ranked No. 4. The top two teams in the pool advance to second round Pool E, which will be played in Tokyo, Japan.The top two in Pool E will progress to the semifinals at Dodger Stadium in Los Angeles.With runners on first and third and two outs, Scott Burcham brought home Mike Meyers on an infield single in the top of the 10th on Monday.Josh Zeid closed out the game for Israel, including striking out Korea slugger Dae-Ho Lee – who hit 14 homers for the Seattle Mariners last season – to end the game.Right-hander Jason Marquis started for Team Israel and pitched three scoreless innings.The 15-year Major League veteran allowed two hits and struck out three before leaving with Israel holding a 1-0 lead.Korea’s starter, left-hander Won-Jun Chang, allowed just two hits over four innings, but walked three in the second inning, including Tyler Krieger with the bases loaded.Korea tied the score in the fifth inning, with Geonchang Seo’s single scoring Kyoung-Min Hur.Despite the dream start to the tournament, Israel manager Jerry Weinstein is not getting carried away.“It means we have a win in the bank. That’s all it means,” said Weinstein. “Other than that, it means that we’ve got to get ready to play tomorrow, which will not be easy, especially with this late night and very adrenalized, emotional ballgame.”Marquis and Zeid not only combined to hurl six scoreless innings, but they preserved their availability for the remainder of pool play. Both pitchers stayed under 50 pitches, with Marquis ending his day at 45 pitches and Zeid at 49. Under the Classic’s pitch-count rules, that means both only need one day of rest before they can pitch again and can face the Netherlands in Israel’s final Pool A game on Thursday.“That was our strategy, that is what we were trying to do,” Weinstein said. “We were committed to Zeid pitching till we won or lost the game, so it wasn’t like we had a grand plan for Zeid. But we definitely had one for Marquis. And they attacked the strike zone aggressively, and we were fortunate to keep both those guys in a position to pitch in a couple of days against the Netherlands.”Zeid said Monday’s victory was the pinnacle of his career.“This has to be it. This has to be the top, top win as a team, I think in my career,” said Zeid.“I’ve been lucky enough to be part of a couple of championships in the lower levels in the Minor Leagues and in high school, but nothing compares to this stage.“To come out here and show the world what we’re capable of, I think, this mattered to me a lot. I was extremely excited when that final out was made, and as Scotty [Burcham] said, we got to take a deep breath, enjoy this win tonight, but tomorrow is a brand-new day, we just have to play a new day.”