Yarden Gerbi claimed a bronze medal in the women's under-63 kilogram judo competition at the Rio Olympics. 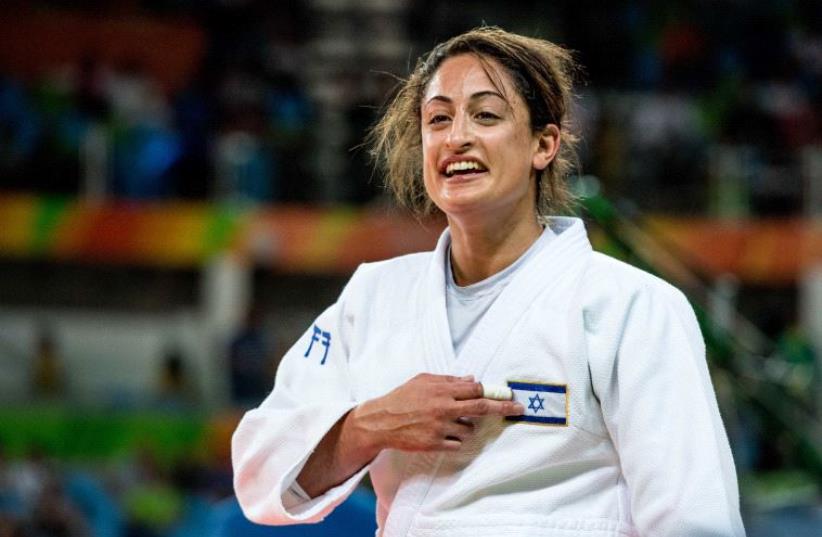 Yarden Gerbi
(photo credit: ASAF KLIGER)
Advertisement
After eight years, the wait is finally over.Israel won its first Olympic medal since 2008 on Tuesday after Yarden Gerbi claimed a bronze medal in the women’s under-63 kilogram judo competition at the Rio games.She became the fourth Israeli judoka to take an Olympic medal, joining Yael Arad (silver medal – Barcelona 1992), Oren Smadja (bronze – Barcelona 1992) and Arik Ze’evi (bronze – Athens 2004). Israel’s four other medals came courtesy of Gal Fridman (bronze – Atlanta 1996, gold - Athens 2004), Michael Kolganov (bronze – Sydney 2000) and Shahar Zubari (bronze – Beijing 2008). Gerbi also became just the second Israeli woman to win a medal, joining Arad.Gerbi received a bye into the second round on Tuesday where she faced Cuba’s Maricet Espinosa. She found herself in an early hole after Espinosa registered a yuko, the smallest score that can be awarded, with 3:25 minutes remaining. However, she bounced back and secured the win with 1:24 minutes left, pinning down Espinosa for 15 seconds, earning her an ippon, judo’s version of a knockout.The quarterfinal against Brazil’s Mariana Silva began in a festive atmosphere, with the locals and the Israeli fans cheering their representatives. Gerbi needed to receive treatment with 2:20 to go after getting hit in her mouth and beginning to bleed.With no score being registered in five minutes, the battle went into golden score in which the first judoka to get on the board wins. Gerbi thought she deserved at least a yuko on a couple of occasions, but the Australian referee questionably chose to ignore her attacks. After 1:58 minutes of golden score, Silva registered a yuko and progressed to the last four.Gerbi recovered and beat China’s Junxia Yang in her first bout in the repechage before overcoming Japan’s Miku Tashiro in the battle for the bronze, registering a yuko and a waza-ari for a convincing win.Gerbi will receive a bonus of NIS 250,000 from the Olympic Committee of Israel. She was considered to be one of the delegation’s best medal hopes in Rio, but had experienced several near misses in recent major events. After claiming a gold medal at the 2013 Worlds and a silver in the event the following year, she ended last year’s edition, as well as this year’s European Championships, in fifth place, losing in the bouts for the bronze medal.Elsewhere, Maayan Davidovich climbed up to fifth place in the women’s RS:X windsurfing competition on Tuesday. Davidovich ended the fourth race of the competition in 11th place, but finished the fifth in fourth and the sixth in third, taking her to a total of 35 points.Flavia Tartaglini of Italy leads the competition with 24 points, with Davidovich a mere eight points from Stefaniya Elfutina of Russia in third place.The windsurfers will enjoy a rest day on Wednesday before racing three more times on Thursday. There will be 12 races in total before the top 10 take part in the medal race on August 14 to determine final positions.Also Tuesday, Dudi Sela, ranked at No. 65 in the world, lost to world No. 13 David Goffin of Belgium 6-3, 6-3.Sela was the first Israeli man to participate in the singles event at the Olympics since Gilad Bloom in Barcelona 1992.Meanwhile, teenage swimmer Ziv Kalontarov finished the men’s 100-meter freestyle heats in 45th place out of 59, registering a time of 50.65 seconds.