The gold medal performance in the clubs and hoops came shortly after Israel claimed a silver in the ribbons final. 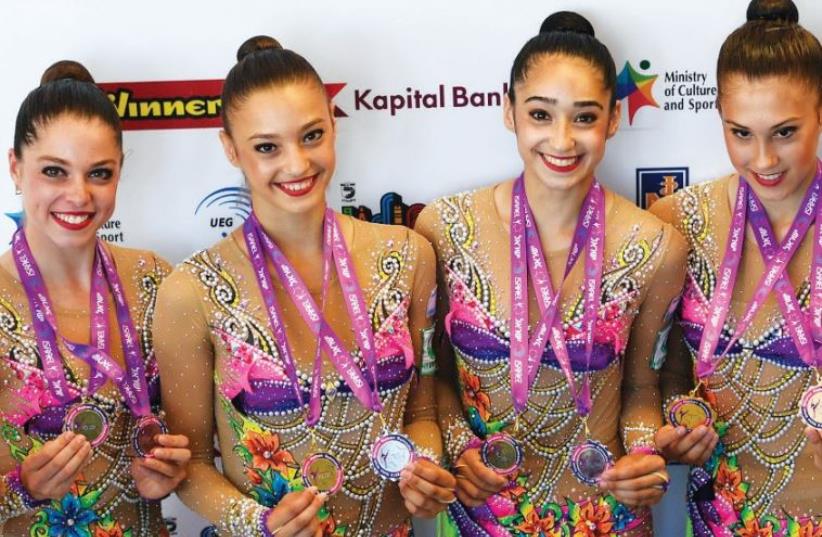 The members of Israel’s rhythmic gymnastics national team were understandably delighted on Sunday after claiming the gold medal in the clubs and hoops final at the European Championships in Holon.
(photo credit: AMIT SCHUSSEL)
Advertisement
Israel's rhythmic gymnastics national team is targeting Olympic glory in Rio after making history on Sunday, winning gold and silver medals at the European Championships in Holon.
After taking a bronze medal in the all-around final in the opening day of the event on Friday, the team of Yuval Filo, Alona Koshevatskiy, Ekaterina Levina, Karina Lykhvar and Ida Mayrin won its first ever gold medal at the European Championships after registering a score of 18.316 in the clubs and hoops final. Spain finished in second place while Bulgaria took the bronze, with favorite Russia only coming in eighth.
The gold medal performance in the clubs and hoops came shortly after Israel claimed a silver in the ribbons final with a score of 18.400.
Belarus finished ahead of Israel with a score of 18.516, with Spain coming in third.
Israel also won three medals at the European Games in Baku, Azerbaijan last summer, taking silvers in the all-around final and in the clubs and hoops, while clinching a bronze in the ribbons.
The Israel roster was rebuilt at the start of 2014 with the goal of reaching the Olympics for a third straight time in Rio 2016. The previous national teams advanced to the final at Beijing 2008 and London 2012 and the current squad is expected to do the same in Rio and perhaps even challenge for a medal.
Olympic medals are only awarded in the all-around event.
"We are so proud. We really enjoyed performing here. The crowd was amazing," said Israel captain Koshevatskiy. "It is a realistic target to win a medal in Rio, but we are not thinking about it." Over NIS 8 million were invested in the organization of the three-day championships hosted in Israel for the first time, with representatives from 37 countries taking part in the different events.