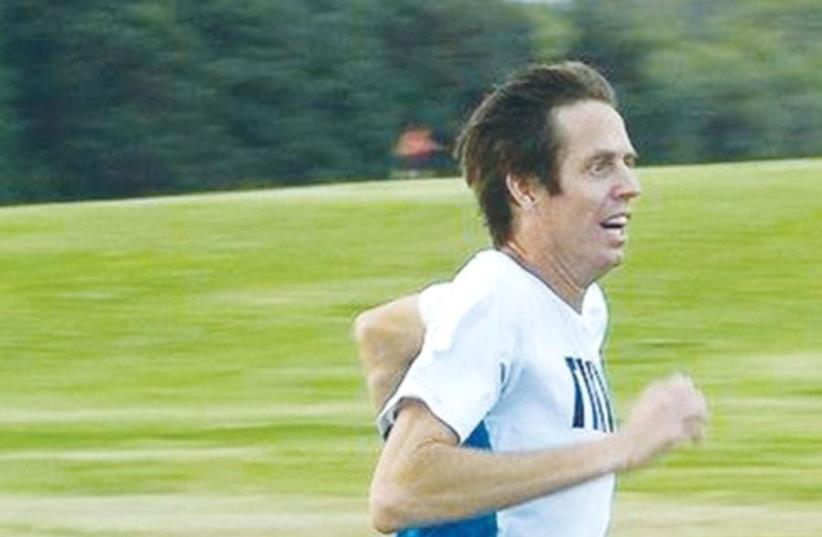 Eitan Hermon broke the marathon world record for a single-leg amputee yesterday, clocking a time of 2:56.53 hours in Vienna.
(photo credit: EITAN HERMON WEBSITE)
Advertisement
Israel’s Eitan Hermon set a world record in the marathon for single-leg amputee runners on Sunday, clocking a time of 2:56.53 hours in Vienna, Austria.Hermon, who lost a leg in the 2006 war in Lebanon during his service as an IDF reserve, is a T42 athlete, which means he competes with one prosthetic leg.He finished in first place in the IPC Athletics Marathon World Championships at the London Marathon two years ago and broke the world record he had been chasing for years in his 16th attempt on Sunday.Hermon had already held an unofficial world record over 10km and the second fastest single-amputee marathon time.Hermon spent six weeks in hospital after the armored vehicle he was riding hit a roadside IED in the summer of 2006. After eight months, he decided to have his leg amputated below the knee so he could run with a prosthetic leg due the excruciating pain he was suffering from.“Running was something I had done my whole life and this was the way for me to get back to what I was,” he said before the 2015 London marathon.Hermon receives help from Tikvot, a non-profit, volunteer- based organization which rehabili-tates Israel’s victims of terror and wounded soldiers through sports.Minister of Culture and Sport Miri Regev called Hermon to congratulate him, and linked be-tween his achievement and Israel’s Holocaust Remembrance Day. “You proved that we are a strong and steadfast people, and that we cannot be destroyed,” she told Hermon.Also in Vienna, Israel’s Elena Dolinin ended the women’s half-marathon in second place in a new personal best time of 1:15.01 hours.Elsewhere, Tesama Moogas finished the men’s event at the London Marathon in 21st place, clocking a time of 2:18.33h to qualify for the world championships that will also be held in Lon-don this summer.Kenya’s Daniel Wanjiru held off a late charge from Ethiopian Kenenisa Bekele to win the Lon-don Marathon in two hours five minutes 48 seconds.His triumph completed the double for Kenya after Mary Keitany sealed her third London title in a women only world record of 2:17.01, beating Britain’s Paula Radcliffe’s previous best by 41 seconds.Radcliffe still holds the overall record of 2:15.25, which she set in a mixed gender race at the London Marathon in 2003 when she used male runners to help set the pace.The IAAF recognizes two marathon world records for women, one for “mixed gender” and the other for “women only.”Bekele, 34, a three-time Olympic champion on the track, had been hoping to break Dennis Ki-metto’s men’s world record of 2:02.57 and asked pacemakers to deliver him to the halfway mark in 61.30.They arrived 10 seconds slower – still on world-record pace – but Bekele then fell away as his leg muscles tightened up under the strain.Reuters contributed to this report.