“I had a pretty good competition,” said Shatilov, who will compete in the floor final on Saturday. 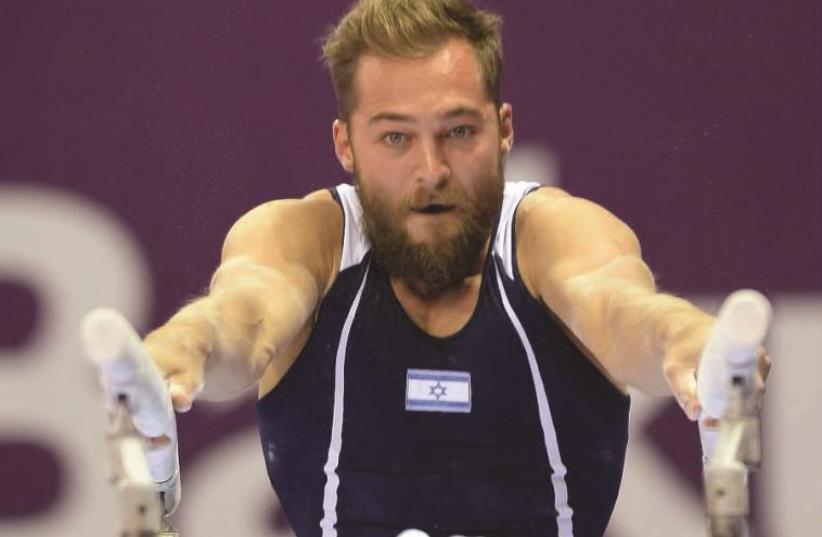 Israel’s Gymanst Alex Shatilov finished seventh at the all-around final at the European Games in Baku
(photo credit: OCI)
Advertisement
Alex Shatilov ended the men’s individual all-around artistic gymnastics final at the European Games in seventh place on Thursday, while Tzuf Feldon finished the women’s event in 17th.Shatilov recorded an overall result of 84.631, competing in the pommel horse (14.3), rings (13.533), floor exercise (14.166), vault (14.133), parallel bars (13.933) and horizontal bar (14.566). The 28-year-old was pleased with his performance despite stumbling in the floor exercise, his best apparatus.“I had a pretty good competition,” said Shatilov, who will compete in the floor final on Saturday. “Unfortunately, I fell in the floor, but I’m not making a big deal out of it. I’m glad I competed in the all-around in Baku because this was a good preparation for the World Championships in Glasgow in September where I will need to book my place at the Rio Olympics through the all-around event.”Feldon, 16, finished with a score of 49.599, recording 11.9 in the floor exercise, 12.8 in the vault, 11.966 in the uneven bars and 12.933 in the beam.“I’m really pleased with my performance,” said Feldon. “This is a big achievement for me when you consider that this is my first year at the senior level. It was a great experience to compete with the best gymnasts in Europe.”Guy Starik, who celebrated his 50th birthday last month, came tantalizingly close to qualifying for his fifth Olympics on Thursday, ending the 50-meter rifle prone final in sixth place with a score of 122.5.“I’m feeling mixed emotions because on the one hand I reached the final of a major competition for the first time in a while, but on the other hand I really wanted to secure my place at Rio 2016 and failed to do so,” said Starik, who will have two more chances to qualify for the Olympics, at next month’s European Championships and in a World Cup event in August.Israel’s duo of Sean Faiga and Ariel Hilman beat the Netherlands 2-0 (21-17, 21-15) in the beach volleyball competition on Thursday, claiming their second win in two games in Pool E ahead of Friday’s final group game against the Czech Republic.After seeing Israel’s rhythmic gymnastics national team claim a silver medal in the all-around final on Wednesday, Neta Rivkin and Victoria Filanovsky are hoping to make their mark in the individual final on Friday.