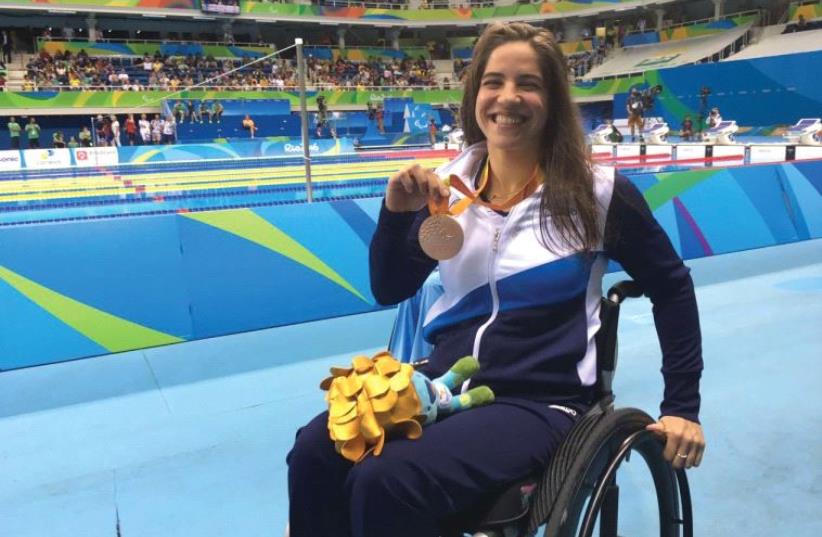 Israeli swimmer Inbal Pezaro claimed the Israeli delegation’s third medal of the Rio Paralympics, which will come to an end with tonight’s closing ceremony.
(photo credit: KEREN ISAACSON)
Advertisement
The Rio Paralympics come to an end on Sunday night with the traditional closing ceremony.Gadi Yarkoni will be the final Israeli to take part in the games when he competes in the marathon for the visually impaired.Regardless of his result, the Israeli delegation will not match its medal haul from London 2012 when it returned home with eight medals, including one gold courtesy of wheelchair tennis player Noam Gershony.Inbal Pezaro hoped to claim her second medal of the games and the delegation’s fourth overall when she took part in the women’s S5 100-meter freestyle final late Saturday night. She advanced to the final from third place overall.Pezaro won her ninth Paralympic medal in the women’s SM5 200m individual medley final late Thursday night. Pezaro, who reached the finals in all five of her individual events in Rio, scaled the podium after clocking 3:38.20 minutes.Pezaro won three medals in each of the previous two Paralympics, taking three bronzes in 2012 and three silvers four years earlier, while also claiming a silver and a bronze in Athens 2004.“It has been a while since I ended a race feeling that I gave my absolute all,” said Pezaro. “I ended this final with a bittersweet feeling as I feel that I wasn’t able to produce my best and that is tough for me. Nevertheless, I’m happy I managed to achieve something.I have struggled to be at my best this year, but I still won a medal.”Meanwhile, Brazil’s Silvania Costa de Oliveira emulated her older brother Ricardo to complete a family double in Rio on Friday. Both won long jump gold with the final attempt of their respective competitions.Silvania jumped 4.98 meters to move up from the silver medal position in the T11 event, a result which prompted great celebrations among the Brazilian team and supporters at the Olympic Stadium.Silvania and her brother, who won gold in the men’s T11 event on the opening day of the athletics, were both born with a genetic eye condition. Silver in the women’s event went to Brigitte Fatimata Diasso who became the first female athlete from the Ivory Coast to win a Paralympic medal.Lithuania clinched gold in the men’s goalball competition after a convincing 14-8 victory over the USA in the final at the Future Arena.Brazil took the bronze medal after a 6-5 win over Sweden.In the women’s goalball event, Turkey, which ousted Israel in the quarterfinals, secured the gold with a 4-1 win over China.The USA took the bronze after defeating Brazil 3-2.On the last day of the equestrian competition, Belgium’s Michele George ended her Rio 2016 campaign by successfully defending her Paralympic crown. George, on her last ride on board Rainman, won the Grade 4 Individual Freestyle Test to add to the silver medal she won in the Individual Championship Test. George, who is paralyzed in one leg after a riding accident, won two gold medals at London 2012.The United States regained its women’s wheelchair basketball crown after overcoming old rival Germany 62-45 in the final. The Americans ran out comfortable winners at the Rio Olympic Arena and have now won three of the last four editions of the Games. Netherlands won the bronze medal match, beating Great Britain 76-34.