Muki will face world No. 2 Rustam Orujov of Azerbaijan in the semifinals later Monday. A win and he's guaranteed a gold or silver medal. 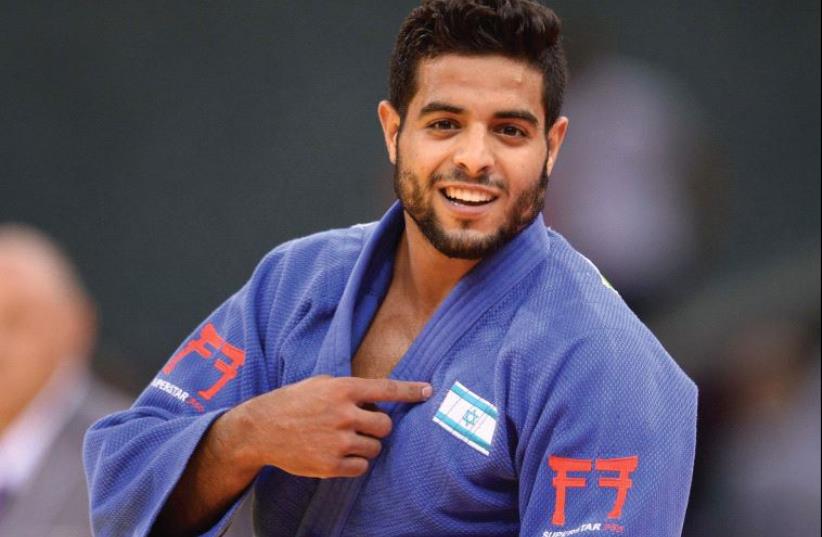 Sagi Muki
(photo credit: Courtesy)
Advertisement
Israel is still waiting for its first Olympic medal since 2008 after Sagi Muki missed out on a place on the podium in the judo under-73-kilogram competition in heartbreaking fashion on Monday.Muki advanced impressively to the semifinals, winning two of his three bouts with an Ippon, judo’s version of a knockout.He needed just one more win to become Israel’s first Olympic medalist since windsurfer Shahar Zubari took a bronze in Beijing 2008. However, he came up short against world No. 2 and European champion Rustam Orujov in the semis and was then beaten by Lasha Shavdatuashvili of Georgia, the Olympic champion in the under-66kg event in London 2012, in the repechage battle for the bronze.Muki, who won the gold medal at the European Championships last year, entered Monday with many question marks hovering over his fitness. He struggled with a back injury in the weeks leading up to the Games, limiting him in training.At one stage he was even a doubt to participate in Rio, but he looked great in the early rounds on Monday After receiving a bye into the second round, Muki took a little time to find his rhythm against Rok Draksic of Slovenia. He ultimately advanced with an Ippon 2:16 minutes into the bout. Muki then beat Igor Wandtke of Germany thanks to a late waza-ari, the second highest score, with 1:25 remaining.He booked his place in the semis with another Ippon in the quarterfinals, tossing American Nicholas Delpopolo on his back with 1:09 left on the clock.The semifinal against Orujov got off to the sound of cheers from the Israeli fans in attendance. Muki found himself behind on penalties early on and at one stage was within one shido of handing Orujov the win. He found himself in an even tougher situation when the Azerbaijani registered a yuko, the smallest score that can be awarded, with 1:35 minutes to go.Muki did all he could to tie the score, but couldn’t register any score and was relegated to the battle for the bronze which he would lose.Also Tuesday, Maayan Davidovich got the women’s RS:X windsurfing competition off to an encouraging start while Shahar Zubari experienced a disappointing opening day.Davidovich is ranked in seventh place overall with 11 points after ending the first three races in fifth, sixth and sixth positions.Zubari ended the men’s first race in ninth, but could only manage 17th and 20th in the next two races and is in 16th place overall.Elsewhere, shooter Sergey Richter missed out on a place in the final of the 10-meter Air Rifle competition, finishing in 14th position with a score of 623.28 points.