Sergey Richter became the seventh Israeli to secure his place in Rio, the first who doesn't hail from athletics or swimming. 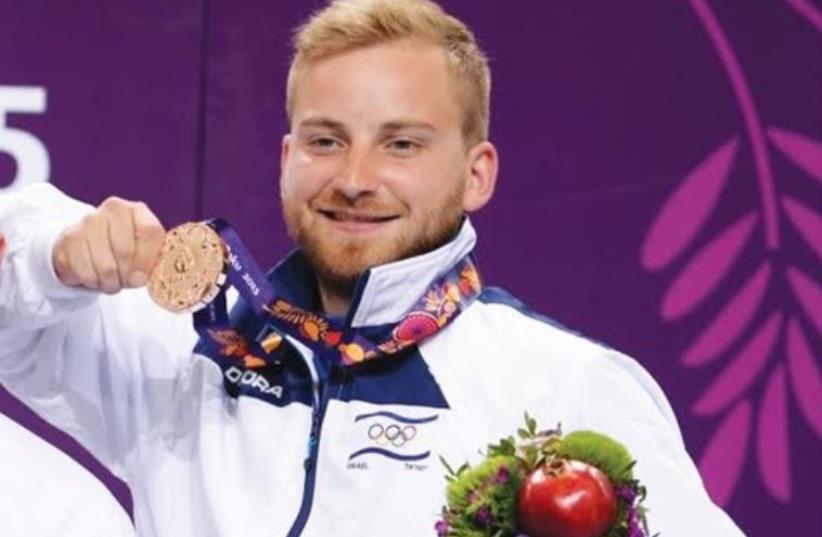 Israeli shooter Sergey Richter wins bronze medal at European Games
(photo credit: OCI)
Advertisement
Shooter Sergey Richter won Israel's second medal in as many days at the European Games in Baku, Azerbaijan on Tuesday, ending the men's 10-meter air rifle competition in third place to qualify for next summer's Rio Olympics.The 26-year-old former European champion recorded a result of 185.5 in the final and picked up the one and only Olympic quota on offer in Baku, as the two shooters who finished ahead of him had already secured their place in Brazil."I had a tough season because I kept coming up short in my quest to qualify for Rio," said an elated Richter, who also represented Israel at London 2012. "The pressure ahead of Baku was unbearable and it took me a few seconds to regain my composure in the final once I realized I clinched my place in the Olympics."Richter became the seventh Israeli to secure his place in Rio, the first who doesn't hail from athletics or swimming. Richter scaled the podium less than 24 hours after Israeli wrestler Ilana Kratysh won a silver medal in the women's 69kg freestyle competition."The Olympic committee set the delegation a target of six medals and we already have two so we are heading in the right direction," added Richter. "Now I can calmly prepare for Rio."Olympic Committee of Israel Secretary General Gili Lustig was understandably delighted with the delegation's second triumph in two days."Kratysh put on an admirable performance after coming back from a serious knee injury and we achieved two goals today with Richter, winning a medal and qualifying for the Olympics," he said. "This is a very special event and there is still so much more to come.Kratysh and Richter will already return to Israel on Wednesday and almost 80 athletes will join us on Friday ahead of the second week of the Games. We set ourselves the target of winning six medals and reaching six finals and I certainly think that is within reach."Israel's rhythmic gymnastics team will enter the fray on Wednesday, with medals on offer in the group all-around competition, as well as places in the ribbon and clubs and hoops finals. "We have some good memories from Baku after winning a historic all-around bronze medal at the European Championships here last year," said coach Irina Vigdorchik. "All the top teams in Europe are here and in order to succeed our girls will have to be at their best."Israel's duo of Sean Faiga and Ariel Hilman will begin their participation in the beach volleyball competition on Wednesday. They will face Turkish opponents before coming up against Dutch and Czech teams on Thursday and Friday, respectively.The top three teams in the group will advance to the elimination round.