Despite playing with 10 men for over an hour, determined northerners claim Super Cup title on penalties. 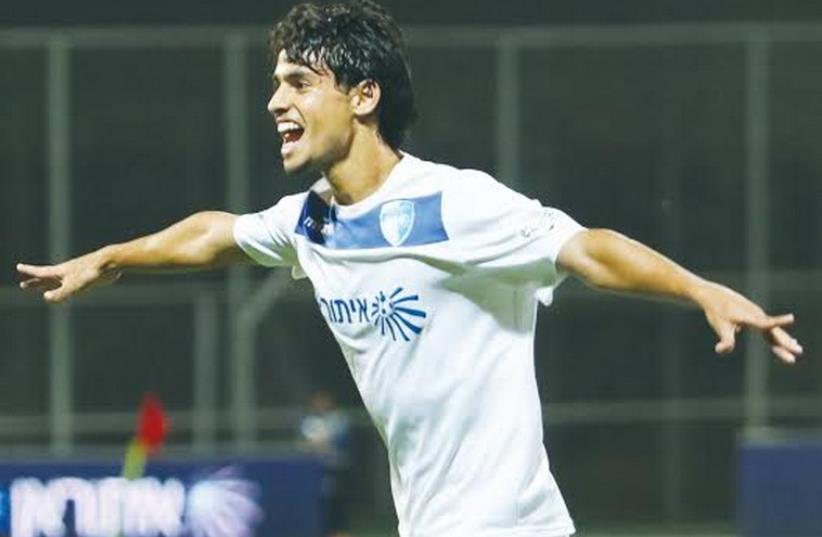 Ironi Kiryat Shmona midfielder Roei Kehat netted his first career hat-trick Sunday night to lead his team to a 3-1 win over Hapoel Beersheba
(photo credit: ERAN LUF)
Advertisement
The Israeli Super Cup made a dramatic return on Saturday, with last season’s runner-up Ironi Kiryat Shmona beating treble winner Maccabi Tel Aviv 5-4 in a penalty shootout in Netanya after extra-time ended in a 2-2 draw.Kiryat Shmona played with 10 men from the 58th minute and twice trailed against the yellowand- blue, with Eran Zahavi netting a brace.However, the northerners leveled the score in the 74th minute to force extra-time and equalized in the 115th minute to send the showdown to penalties. Zahavi couldn’t convert his spot kick in the shootout, and after Dor Micha missed Maccabi’s sixth attempt, youngster Eli Balilti converted his shot to win the Super Cup, which was making its return after a 26-year hiatus.The curtain raiser to the domestic campaign was first held in 1956 and became a staple in local soccer’s calendar after taking place regularly between 1974 and 1989.Saturday’s loss couldn’t have come at a worse time for Maccabi, which faces FC Basel in the first leg of the Champions League playoffs on Wednesday.Not only will the yellow-andblue’s confidence be dented by the setback in Netanya, but also many of its players were on the field for the full 120 minutes, meaning they may well be fatigued for the first leg in Switzerland.Kiryat Shmona registered the first chance of the match, with goalkeeper Juan Pablo saving Ahmed Abed’s attempt in the ninth minute.The turning point in the match looked to have arrived in the 58th minute, with Kiryat Shmona’s Luis Gutierrez being set off after fouling Zahavi on the edge of the box and being shown his second yellow card.Zahavi’s subsequent free kick just missed the target, but Maccabi’s prolific scorer found the back of the net in the 71st minute, blasting the ball into the top left corner from the edge of the area.With a one-goal and oneman lead, Tel Aviv seemed likely to cruise to the title, but just four minutes later Dean Maimoni leveled the score, tucking the ball in from a tight angle after a Kiryat Shmona corner.The northerners held on for extra time, only to concede in the 102nd minute. Omri Ben-Harush did all the hard work and Zahavi scored after being in the right place at the right time, with Maimoni’s clearance hitting the yellowand- blue star’s feet and rolling into the net.However, despite playing for 10 men for almost an hour, Kiryat Shmona still managed to equalize five minutes from the end of extra-time, with Ahmed Abed scoring from close range to force penalties.Despite receiving a second opportunity after missing his first attempt from the spot, Zahavi couldn’t beat Guy Haimov in the shootout.However, Abed had his shot saved by Juan Pablo before the next four penalty takers from each team converted their attempts to send the shootout into sudden death.Haimov saved Micha’s penalty, but left his line too early once more and the Maccabi midfielder was given another attempt. However, the Kiryat Shmona stopper cleared the additional shot as well and Balilti converted to give the northerners the cup.