The 32-year-old Israeli, ranked No. 77 in the world, was playing in his first ATP Tour quarterfinal since reaching the semifinals of the Chennai Open in India in the first week of January. 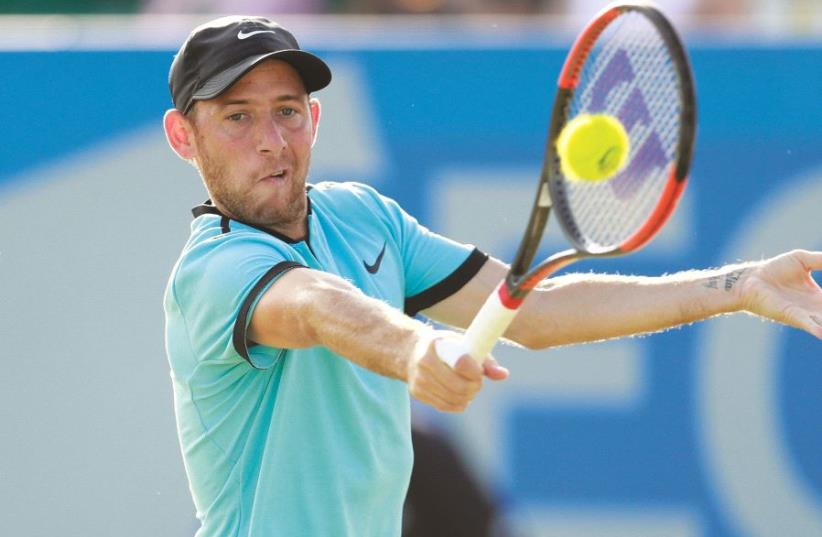 Israeli tennis star Dudi Sela
(photo credit: REUTERS)
Advertisement
Dudi Sela was one set away from reaching his first ATP Tour semifinal in almost nine months on Friday, but with Yom Kippur about to commence he retired from his quarterfinal match against Alexandr Dolgopolov in Shenzhen, China.The 32-year-old Israeli, ranked No. 77 in the world, was playing in his first ATP Tour quarterfinal since reaching the semifinals of the Chennai Open in India in the first week of January.He asked for his match in Shenzhen to start as early as possible to reduce the chance of having to stop due to Yom Kippur. But his showdown with Dolgopolov (53) was scheduled as the second match on center court and he was always going to have trouble completing it after the first contest of the day lasted two hours and 16 minutes.After losing the first set 6-3, Sela tied the match with a 6-4 win in the second set, but while trailing 1-0 in the decider, and with Yom Kippur about to begin in Shenzhen, he approached the chair umpire and told him that he needed to retire.
Dudi Sela vs Alexandr Dolgopolov - SHENZHEN 2017 QF Highlights, September29, 2017. (YouTube/Tennis Highlights 2)
Reaching the semifinals would have earned Sela an additional $12,000 to the almost $30,000 he had already guaranteed himself by advancing to the last-eight. It also cost him at least 45 ranking points, and of course the chance to go even further in the tournament.Dolgopolov progressed to the final on Saturday with a 6-4, 7-5 victory over Damir Dzumhur.On Saturday, after the end of Yom Kippur, Sela was also knocked out of the doubles tournament in Shenzhen, losing in the semifinals with partner Andre Sa of Brazil 6-3, 7-6 to No. 1 seeds Nikola Mektic and Nicholas Monroe.While Sela didn’t comment on his withdrawal from the singles in Shenzhen, his older brother Ofer provided a little insight on Dudi’s decision.“Dudi isn’t a religious man and he doesn’t usually fast on Yom Kippur and for the first time in his career he was forced to make this excruciating decision which effects his ATP ranking and cost him tens of thousands of dollars,” wrote Ofer Sela. “No one forced him to retire. He didn’t do it because he was afraid of anyone, or because he was asked to. He did it only because he respects Yom Kippur and the country which he represents.”Sela wasn’t the only Israeli athlete whose plans were affected by the holiest day on the Jewish calendar. Israel’s only NBA player Omri Casspi was set to make his preseason debut with the Golden State Warriors against the Denver Nuggets on Saturday, but he sat out the game due to Yom Kippur.In other tennis news, Yoni Erlich aims to win his first title in almost two years on Sunday when he plays with Pakistani partner Aisam-ul-Haq Qureshi in the final of the Chengdu Open in China. The Israeli/ Pakistani duo face Marcos Daniell and Marcelo Demoliner in the final.