After Shira Rishony claimed a silver medal in the under-48 kilogram event on Friday, Yarden Gerbi and Linda Bolder both went one better on Saturday. 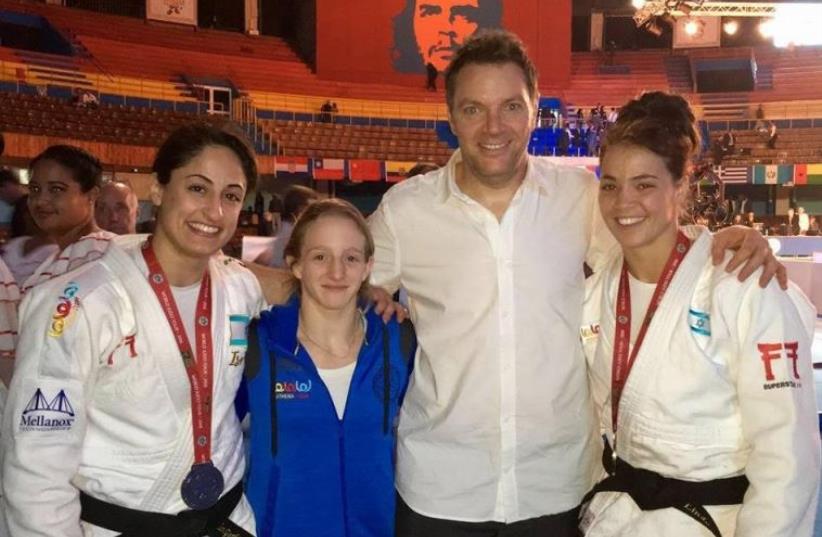 Israeli judokas Yarden Gerbi (L) and Linda Bolder (R) both won gold medals at the Grand Prix of Havana in Cuba on January 23, 2016, while Shira Rishony (2nd L) claimed a silver the previous day. All three are guided by national team coach Shany Hershko (2nd R).
(photo credit: ISRAEL JUDO ASSOCIATION/FACEBOOK)
Advertisement
Israeli judokas Yarden Gerbi and Linda Bolder got 2016 off to a golden start on Saturday, scaling the top of the podium at the Grand Prix of Havana in Cuba.After Shira Rishony claimed a silver medal in the under-48 kilogram event on Friday, Gerbi and Bolder both went one better on Saturday.Gerbi, the 2013 world champion, defeated local Maricet Espinosa in the final of the under-63kg competition and remains one of Israel's favorites for an Olympic medal in Rio de Janeiro next summer."I have been waiting for this feeling of winning gold since 2014 and this is too long for me," said Gerbi. "It feels great. I'm not at my best right now, but it's important to win even when you are not at your best. Every time I think of the Olympics I get butterflies and this is my dream." The Israeli delegation's day got better when Bolder finished first in the under-70kg event. She overcame Gercsak Szabina of Hungary in the final and picked up important ranking points in the race to qualify for the Rio Games."The spirit in the team is very strong. We had a silver yesterday and two golds today. We feel really positive for this year," said Bolder.Israel women's national team coach, Shany Hershko, was understandably delighted with the squad's performance."I'm very happy that we have achieved our goals to begin the year and started 2016 with an historic accomplishment for the women's national team," said Hersko.