The championships come to a close on Sunday, and for the first time in 10 years and five editions of the event, Israel could finish without a single finalist. 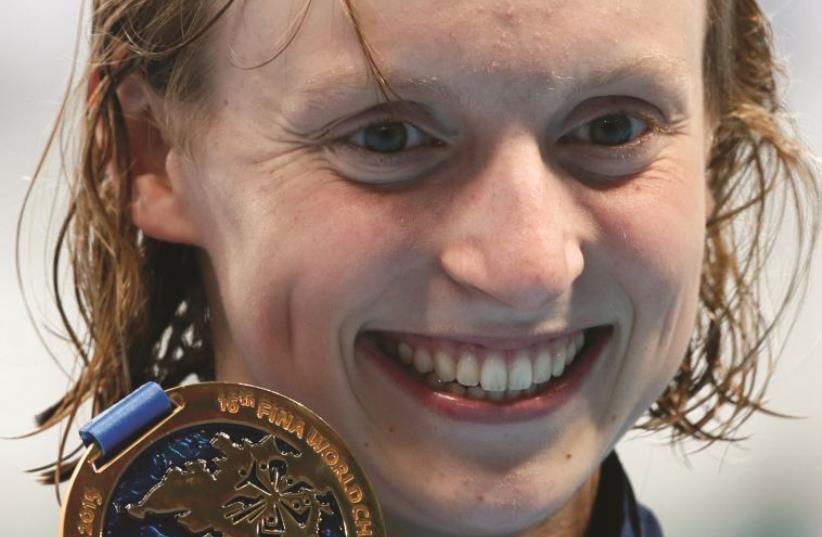 Katie Ledecky of the US poses with her gold medal after winning the women’s 800m freestyle final at the world championships in Kazan, Russia.
(photo credit: REUTERS)
Advertisement
Gal Nevo is the Israeli delegation’s last hope of reaching a final at the world swimming championships in Kazan, Russia.The championships come to a close on Sunday, and for the first time in 10 years and five editions of the event, Israel could finish without a single finalist.Gal Nevo will take part in the 400-meters individual medley heats on Sunday and the 2009 finalist will have to improve his season-best time considerably in order to finish among the top eight qualifiers.Jonatan Kopelev and Guy Barnea came up short in their attempt to once more reach the final in the 50m backstroke on Saturday. Kopelev, who was eighth in the final two years ago, ended the event in 11th place, setting a time of 25.04 seconds in the semifinals.Barnea, who was targeting his third straight 50m back final, didn’t even advance to the semis, clocking a time of 25.31s in the heats, good enough for 17th place overall.Meanwhile, American Katie Ledecky entered the record books as she smashed the women’s 800m world record to claim her fifth gold medal of a remarkable world championships on Saturday.Ledecky, the 18-year-old high school graduate, blitzed her way to gold in eight minutes 7.39 seconds, setting her third world record of the week and 10th of a glittering career.Ledecky’s one-way win also saw her become the first swimmer across both genders to secure world titles over the 200m to 1500m distances.Sun Yang of China had the same ambition, but was defeated in the men’s 200m freestyle final on Monday.Chad le Clos won his first individual title of the week as the South African smashed his personal best in winning the men’s 100m butterfly.Le Clos, unbeaten in the event since London 2012, held the lead at the turn before creating daylight between himself and Laszlo Cseh to post 50.56 seconds.Emily Seebohm garnered Australia’s sixth gold medal of the championships with a remarkable final lap to take the women’s 200m backstroke title.Defending champion Missy Franklin, of the United States, had led at 100m, but Seebohm timed her finale to perfection to snatch the lead in the final 25m, striking gold in 2:05.81.Olympic champion Florent Manadou’s sprinting prowess continued as the Frenchman took the men’s 50m freestyle gold in 21.19 seconds.Manadou had already won the men’s 50m butterfly title and raw power secured him gold here, with Nathan Adrian, of the United States, taking silver in 21.52 seconds.Sweden’s Sarah Sjostrom powered to the women’s 50m butterfly title for her second gold of the week to become the first woman to claim the world butterfly double.