Israel’s Minenko back in Worlds final 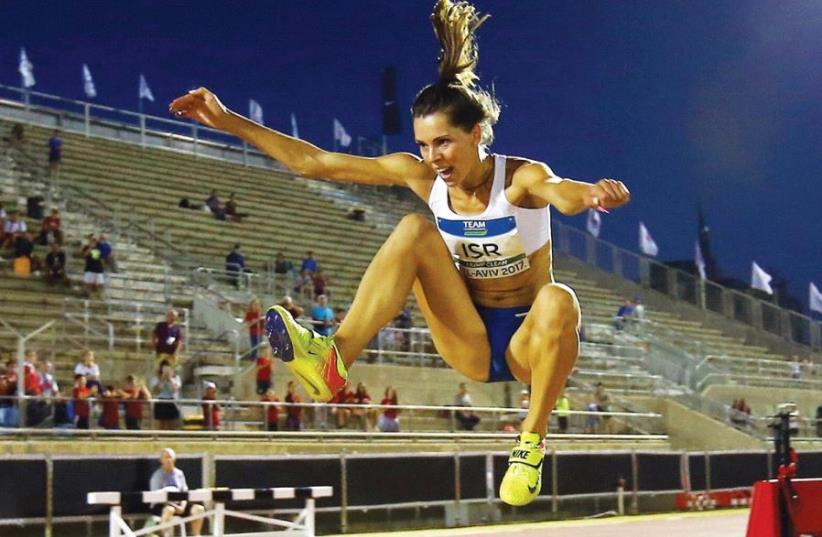 Israeli triple-jumper Hanna Knyazyeva-Minenko
(photo credit: UDI ZITIAT)
Advertisement
For Israel’s Hanna Knyazyeva-Minenko will take part in the women’s triple jump final at the World Athletics Championships in London on Monday after equaling her season-best result in Saturday’s qualifiers.The 27-year-old, who finished in fifth place at the Rio Olympics last summer and won a silver medal at the previous Worlds in Beijing two years ago, registered a jump of 14.17 meters with her second attempt.While it was three centimeters short of the result that secured automatic qualification, Minenko still advanced, with her best jump being good enough for eighth place overall and the top 12 progressing.“I’m really happy to have qualified for the final,” said Minenko, who underwent foot surgery following the Olympics and struggled for fitness for much of the past year. “I had only competed in one competition this year and it was difficult for me to get back to myself mentally. I really love the atmosphere in the stadium in London and it will be really fun to participate in the final. I hope to give my all on Monday.”Israel’s five other representatives in the championships will enter the fray on Sunday.Marhu Teferi and Girmaw Amare will compete in the men’s marathon, with Maor Tiyouri and Korlima Chemtai to run the women’s marathon. Also Sunday, Marharyta Dorozhon will take part in the women’s javelin qualifiers. Dorozhon’s Olympic dream ended in tears last summer after she just missed out on a place in the Rio Games.The 29-year-old Dorozhon set the IAAF Qualifying Standard for Rio in 2015, but according to the regulations laid out by the Olympic Committee of Israel, she was required to register a throw of over 60 meters in 2016 in order to secure her place.The Ukrainian-born Dorozhon, who became an Israeli citizen in 2014, struggled with a groin injury for much of the year, and came nowhere near the distance she needed to clear.She qualified for the World Championships with a throw of 63.07m to win the gold medal at the Maccabiah last month.Meanwhile, Mo Farah launched the championships in scintillating fashion on Friday with another consummate 10,000 meters triumph that further embellished his claim to being the greatest distance racer in the sport’s history.With 55,000 of his home fans roaring their support at the London Stadium, the 34-year-old Briton sprinted away with his 10th consecutive gold medal in a global track final, a dazzling sequence that ranks among the greatest feats in sport.Farah survived being clipped twice from behind in the final lap, nearly tripping over and being forced to take a step off the track, and he ended with cuts and bruises to his “bad legs” that needed treatment.Yet still he was able to unleash one more trademark burst down the home straight to speed away from Uganda’s Joshua Cheptegei and Kenya’s Paul Tanui.The Briton clocked 26 minutes 49.51 seconds, the world’s fastest time in 2017, in what proved perhaps the hardest-earned of all his magnificent triumphs as he protected his six-year unbeaten streak in major championships.Silver medalist Cheptegei, just 20, clocked a lifetime best 26:49.94, chasing Farah all the way to the line, and Tanui 26:50.60.Yet, five years to the very night when he won the 25-lap title at his home Olympics on “Super Saturday” in the same London Stadium, Farah had still not lost that invincible aura, clocking a searing 55.63 seconds for the last lap in spite of his stumbles.It was the perfect way for him to begin his final championship as a track runner before he turns his attentions to the roads as a marathon man.Olympic champion Almaz Ayana of Ethiopia won the women’s 10,000m final on Saturday, triumphing by a massive gap with a time of 30:16.33m.The men’s 100m final took place late Saturday night. Usain Bolt was given a double scare in the semis, by American Christian Coleman, who beat him, and the stadium scoreboard, which initially left him off the results.The Jamaican was seeking his fourth gold in the event before retiring next week after the sprint relay. The American, fastest man in the world this year with 9.92 seconds, clocked 9.97s, with Bolt finishing in 9.98s to be beaten across the line in a 100m race for the first time in four years.Reuters contributed to this report.On TV: IAAF Athletics World Championships: Day 3 action (live on Eurosport at 12 p.m. and 8:35 p.m.)