Israel's Minenko hoping to build on success in London

Minenko was 35 centimeters away from a place on the podium, with Olga Rypakova of Kazakhstan taking the bronze with a jump of 14.77m. 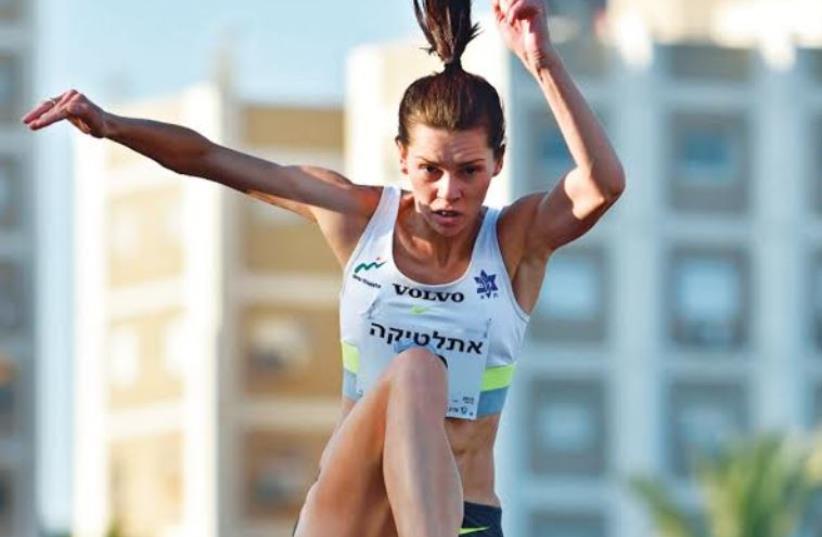 Israel’s triple-jumper Hanna Knyazyeva-Minenko
(photo credit: TIBOR JAGER)
Advertisement
Israeli triple jumper ends final in surprise fourth place despite injury-hampered preparations After once more ending a major global final in the top five, Israel’s Hanna Knyazyeva- Minenko is confident she can register even greater success in the future.Despite only taking part in one competition prior to the World Athletics Championships in London due to the foot surgery she underwent following the Rio Olympics, the 27-year-old ended Monday’s women’s triple jump final in an impressive fourth place.She entered the championships with a modest season-best of 14.17 meters, which she equaled in the qualifiers to book her spot in the final. Minenko proved yet again that she comes up with her best when it matters most by clearing 14.29m with her third attempt of the final before moving up to fourth place with her fifth jump, measured at 14.42m.Minenko was 35 centimeters away from a place on the podium, with Olga Rypakova of Kazakhstan taking the bronze with a jump of 14.77m.Yulimar Rojas of Venezuela won the gold (14.91m), with Caterine Ibarguen of Colombia claiming the silver (14.89m).Minenko has finished no lower than sixth place in the past five global events, coming fourth while representing Ukraine at the London 2012 Olympics before becoming an Israeli citizen. She finished sixth at the World Championships in 2013, won a historic silver medal at the previous Worlds two years ago before ending the Olympic final in Rio last summer in fifth place.“Fourth place at the World Championships. I’m so happy,” wrote Minenko on Facebook. “It was tough. I didn’t train much and this was my first competition abroad this year. But it was so important for myself and coach Alex Merman to not disappoint everyone who supports me, as well as Israel and myself. I hope that the injuries are behind me because with a full year of proper training the sky is the limit.”Rojas claimed Venezuela’s first-ever World Athletics Championships title.The 21-year-old’s win came one day after the South American country won its first medal of any color when Robeilys Peinado took the bronze in the women’s pole vault.“What great pride to see the victory of our Yulimar Rojas, a glorious athlete of the golden generation,” tweeted Venezuela President Nicolas Maduro, whose country is embroiled in an economic and constitutional crisis.“It was a really tough battle but I’m an athlete who never gives up,” said Rojas.“This is a great victory for my country. I am sure they will be celebrating and having a party. Thanks for everything, to my friends, family, my coach and Venezuela.”However, she added she was saddened by the situation in her home country where some 120 people have been killed during four months of sustained anti-government protests and Maduro has faced global pressure to dismantle a newly created pro-government constituent assembly which has been condemned as a power grab.“I’m sad about what has happened in my country, which is a wonderful country... I know that one day we will put a stop to this, all this fighting and this war between brothers,” Rojas said. “I hope I’ve made my country proud.”Elsewhere, Kenya’s Faith Kipyegon added the world title to her Olympic gold when she won a superb women’s 1,500 meters final on Monday, judging her charge to perfection and holding off the field.Kipyegon, silver medalist two years ago, took up the running with 600 to go and was stride for stride with in-form Sifan Hassan until the Dutchwoman faded while the Kenyan stayed strong to cross the line in four minutes 2.59 seconds.Jenny Simpson of the United States, the 30-year-old 2011 champion, also showed great track nous as she slipped up the inside and finished like a teenage sprinter to take second.South Africa’s 800 meters specialist Caster Semenya powered through on the line to grab the bronze.Reuters contributed to this report.On TV: IAAF Athletics World Championships: Day 6 action (live on Eurosport at 8:30 p.m.)