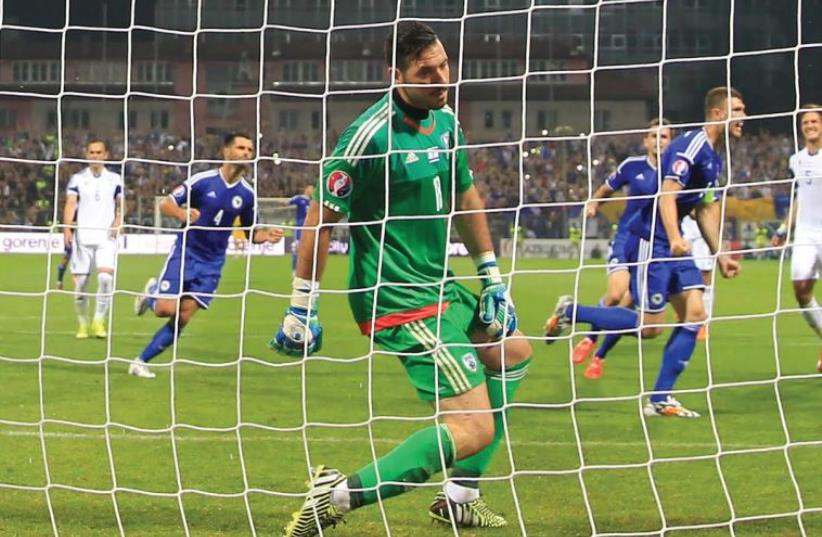 Israel goalkeeper Ofir Martziano
(photo credit: REUTERS)
Advertisement
Israel’s hopes of qualifying for Euro 2016 are hanging by a thread following Friday’s 3-1 defeat to Bosnia and Herzegovina in Zenica, the blue-and-white’s third consecutive loss in Group B.Israel was brimming with confidence after beating Bosnia 3-0 in Haifa last November for its third straight victory to start the campaign.However, Friday’s loss to Bosnia, which came on the back of home defeats to Wales and Belgium in March, has crushed the national team’s confidence, and not only all but ended any chance of automatic qualification, but also left Israel with plenty to do to finish in third place and advance to a playoff.The top two in each group qualify automatically along with the best third-place finisher, while the remaining eight thirdplace teams go into a home-and-away playoff.However, even the expansion of the European Championships from 16 to 24 teams may well not be enough for Israel to reach the playoffs after another poor showing on Friday.Tal Ben-Haim gave Israel the lead against the run of play in the 41st minute, but Edin Visca equalized a minute later before Manchester City’s Edin Dzeko put the hosts in front in first half stoppage time.Visca put the match to bed with a header from close range in the 75th minute.Despite the defeat, Israel remains in third place, but is tied on nine points with Cyprus while Bosnia is just one point further back.Wales leads the group with 14 points after claiming a surprise 1-0 win over Belgium, which has 11 points.Israel still has to visit both Wales (September 6) and Belgium (October 13), while also having home matches against Andorra (September 3) and Cyprus (October 10).“I didn’t celebrate after the wins and I won’t go into mourning after this defeat,” said Israel coach Eli Gutman. “We will have to work hard in our next matches in September. We will first have to beat Andorra and then we’ll see what will happen against Wales. I’m very disappointed with the result. It is now going to be very difficult to finish in third place.”Gutman bemoaned his team’s wastefulness when trailing 2-1.“We didn’t play well in the first half, but what is annoying is that we scored a goal out of nowhere and still entered the break down 2-1,” said Gutman. “When you lose like this you go home and ask yourself ‘what did I do wrong?’ We had our chances at 2-1, but we didn’t convert them and conceded a third goal.”Eran Zahavi, who played as the team’s lone striker, admitted that Israel can no longer realistically hope to finish in the top two.“I can’t explain what happened,” said the Maccabi Tel Aviv midfielder.“When you lead 1-0 you need to find a way to remain in front. Clearly we are not in an ideal situation at the moment. We got the campaign off to an excellent start, but now we are experiencing a poor spell.We will try to do our best until the end of the campaign, but finishing in second place is no longer realistic and we only have ourselves to blame.”Meanwhile, Wales moved closer to its first major tournament in 57 years as Gareth Bale’s classy first-half goal secured a 1-0 win over Belgium.Bale made the most of a defensive howler from Belgium midfielder Radja Nainggolan to calmly finish past goalkeeper Thibaut Courtois after 25 minutes, allowing the hosts to pull up the defensive drawbridge and comfortably see out the game.Wales, whose only appearance in a major tournament came at the World Cup in 1958, could need just two more wins from its final four matches to qualify for the finals in France.